Shreve - Bobby Dean Holcomb, 63, of Shreve, passed away Monday, November 1, 2021, at his home.
Friends may call Friday from 1 to 2 p.m. at Roberts Funeral Home-Sherwood Chapel, Wooster. Services will be Friday at 2 at the funeral home with Pastor Brad Dodson officiating. Burial will be at Sherwood Memorial Gardens.
Bobby was born March 29, 1958, in Wooster, Ohio to Charles and Emogene Holcomb. Bobby was a self-employed welder and mechanic. He enjoyed tinkering on his cars, riding his motorcycle, and fishing. He was a great dad, uncle, granddad, and great granddad.
Bobby will be deeply missed by his children Scott (Christina) Holcomb and Nina Holcomb; grandchildren Cort Stout, Austin and Madeline Espinoza; great-grandchildren Mable and Caspian Stout, Vaeda Espinoza; brother Terry Dale Holcomb; sister Patricia Ann (Roger) Lance
Bobby was preceded in death by his parents.

Mark Kenneth Holcomb age 66 November 28, 1955, through June 12, 2022 It is with deep sadness we announce the passing of Mark Holcomb. Born and raised in Cortland, NY, Mark graduated from Cortland High School, Class of 1973. He attended Paul Smith's College graduating with an AAS in Pre-Professional Forestry. Mark then earned his BS (Magna Cum Laude) in Environmental Science & Forestry followed by a MS degree in Environmental & Resource Engineering from SUNY Syracuse in 1982. Working nearly 36 years for an engineering firm (subsidiaries to now Parsons Corporation), Mark spent his career in the management, design, engineering, and construction of numerous major highway and infrastructure projects in CT, MA, MD, TX and Qatar. His leadership, mentorship, and friendship will be sorely missed. Mark is survived by his wife Joanna, daughters Nichola (partner Stef) and Jennifer (husband Dustin), grandchildren Arya, Oliver, and Quinn, mother Johanne, sisters Lyn (husband Rod) and Karen, and brother David (wife Wanda). He was predeceased by his father Howard. A special thank you to Tina Murphy for her deep love for and friendship with Mark and her dedicated support during his passing. The family will be celebrating Mark's life privately at a time to be determined in August.

Bradford Alerton Griswold, the former owner and manager of the West Hartford Bowling Lanes, died Friday in Hartford Hospital. He was 72.

He was born in Hartford and lived in West Hartford. He owned a summer home in Barkhamsted. He owned and managed the bowling alley for 26 years.

Mr. Griswold was a member of the First Baptist Church in West Hartford, Wyllys-St. John Lodge No. 4 of West Hartford and was a graduate of the University of Connecticut.

Marjorie Evelyn Griswold, 89, formerly of West Hartford, died Sunday, (January 25, 2009) at Brightview of Avon. She was the wife of the late Bradford A. Griswold. Born in Franklin, MA, a daughter of the late Alfred and Ivy May (Marles) Bean, she graduated from the University of Connecticut in 1942. She moved to West Hartford the same year and joined the First Baptist Church, where she was active in the Women's Group. Marjorie had been a Girl Scout Leader and longtime PTA member. She was a docent at Noah Webster society for five years, where she demonstrated weaving and spinning. She enjoyed spending time at her summer homes in Barkhamsted for nearly 40 years and the old family cottage at Groton Long Point from 1941 to 1969. She is survived by six children, Alice M. Kaptinski (John) of Charlestown, RI, Edith Rafferty of South Dennis, MA, Allen B. Griswold (Louise) of North Falmouth, MA, Dorothy Runyon (Jeffrey) of East Hampton, Nancy L. Griswold of Reading, VT, and Donald H. Griswold of Pleasant Valley; her sister, Muriel ''Betty'' Madden of Rocky Hill; 11 grandchildren; and 14 great-grandchildren. She was predeceased by her brother, John Bean.

A Memorial Service will be held Saturday, January 31, 2 p.m., at the First Baptist Church, 90 North Main Street, West Hartford. Burial will be private at the convenience of the family at Fairview Cemetery, West Hartford. There are no calling hours. In lieu of flowers, memorial contributions may be made to either the American Diabetes Assoc., 306 Industrial Park Road, Suite 105, Middletown, CT 06457, the First Baptist Church, 90 North Main St., West Hartford, CT 06107, or a charity of the donor's choice. Taylor & Modeen Funeral Home, West Hartford has care of arrangements. 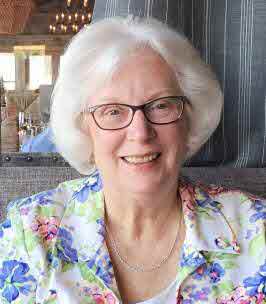 Dorothy Elizabeth Runyon, 71, of Brunswick, ME, died peacefully on June 15, 2022, at Mid Coast Hospital, in Brunswick, ME. Dorothy was born August 3, 1950, in Hartford, CT, to Bradford and Marjorie Griswold. Dorothy is survived by her beloved husband of 51 years, Jeffrey; her children, Kathlene (Richard) Gravelin and Matthew Runyon; her siblings, Alice (John) Kaptinski, Edith Rafferty, Nancy Griswold, and Donald Griswold; her two grandchildren; and thirteen nephews and nieces. She was predeceased by her brother, Allen Griswold (Louise), and her brother-in-law, Patrick Rafferty (Edith).

Dorothy earned her bachelor's degree from The University of Connecticut, after which she achieved credentials from Saint Joseph's College as a Registered Dietician, a vocation she practiced throughout her career. She spent most of her life in East Hampton and West Hartford, CT, developing a love of the ocean while spending time as a child at her family's summer home in Groton Long Point and leading her to settle later in life in midcoastal-Maine.

Her interests were numerous. She followed her keen eye for identifying and cultivating flowers into a lifelong passion for gardening, and her baking was the envy of family and friends alike. She excelled in needlework, most notably her knitting – she was rightfully proud of the mittens and sweaters she sold through gift shops in Harpswell, Maine. But her foremost commitment, love and pride was for her family. Dorothy and Jeffrey met and became high school sweethearts at West Hartford's Hall High School in the late-1960's, forging an indelible bond of over fifty years, during which they spent time in Okinawa before later relocating back to Connecticut to raise her other loves, her children. Dorothy was loved and will be missed by the many who had the privilege to know her.

A Memorial Service is scheduled for Wednesday, June 22 at 11:30 am at the First Baptist Church, 90 North Main Street, West Hartford, CT. Burial will be private. In lieu of flowers, memorial contributions may be made to the Noah Webster House and West Hartford Historical Society.