Settled on land given him by his father; moved to Darien and then to Attica; later settled on a farm in Newstead, Erie Co., NY; in 1843, they sold out and moved to Illinois, making an overland journey to Buffalo, and there embarked--team and all--on a steamer for Chicago; settled DeKalb Co., Ill in 1848, purchasing land in Sections 34 and 35 of Sycamore Township.

Children of George F. Holcombe and Caroline A. Hibbard 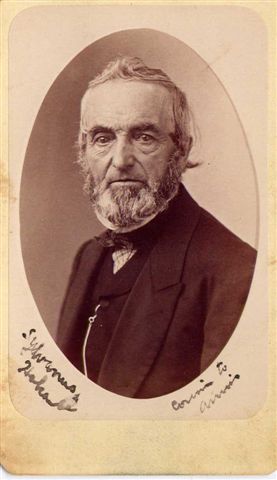 In 1839 Sylvanus drove with his own team to Buffalo, from Sangerfield, NY; he then embarked for Toledo, from there drove to Dekalb, IL, where he was one of the early pioneers; bought a tract of land in Section 34, Sycamore Township and build a small log cabin where his neighbors were the deer and the wolves which were plentiful; crops failed in 1840 and caused much suffering. He retained that land until 1863 at which time he sold and moved to Sycamore, IL, where he was Justice of the Peace and Town Clerk for nineteen years resigning on his 80th birthday. He wrote much of historical interest in his old age.


In 1840 the Town of Sycamore had twelve buildings and a Court House. One of the buildings was owned by Sylvanus. A Congregational Church was organized with eleven members and held services in the Court House. Another building was a shoe shop and another a type of rooming house.

Children of Sylvanus Holcombe and Julia B. Joslyn

Children of Julia B. Joslyn and Sylvanus Holcombe 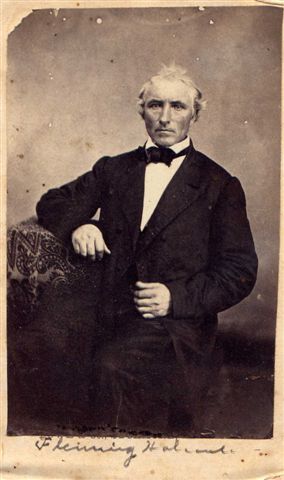 Fleming migrated from New York to Sycamore in 1842. He operated and owned a farm two miles east of the city of Sycamore for nearly 20 years. Both Fleming and Sylvanus farmed on virgin land which was slow, tedious hard work. Fleming was also a shoe maker which helped in the family income.


In 1861 Fleming moved to Sycamore on the south-west corner of High and Walnlut streets. When he died in 1865 his was the first burial in the newly opened Elmwood Cemetery. 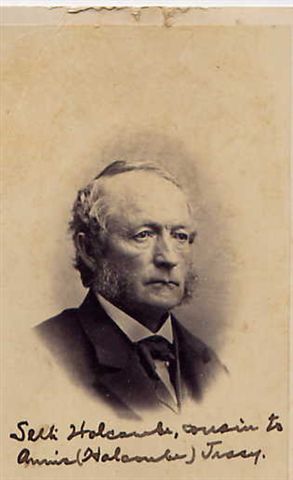 Went to Canada, where he lived for 30 years.

Philander and Laura were enumerated in the 1850 Machias, Cattaraugus Co., NY, federal census, stamped page 488. He was a farmer age 45 born in MA; she was 31, born in NY. There were no children in the household. There was a boarder, 9 year old Ellen Blackley. They lived next door to Chester Locke and his family.

Philander and Laura were enumerated in the 1860 Machias, Cattaraugus Co., NY, federal census, page 265, stamped page 473. He was a farmer, age 55, born in MA, she was 41, born in NY. There were no children in the houehold. There was a border, 20 year old day laborer Amos Dailey. Barton Locke and Chester Locke lived nearby.

Philander and Laura were enumerated in the 1870 Machias, Cattaraugus Co., NY, federal census, page 14. He was a farmer age 65, born in MA, she was 51, born in NY. There were no children in the household. There was a boarder, 11 year old Emma Brown, born in NY. They lived next door to Harlin Locke and his family.

b. circa 1805
Philander Locke was born circa 1805 at MA. He married Laura Holcombe, daughter of Orator H. Holcombe and Hannah Terry.

Children of Caroline A. Hibbard and George F. Holcombe

Reuben Holcombe was the son of George F. Holcombe.

Hiram lived on the homestead with brother Orator F; engaged in raising stock and farmed; he specialized in the raising of Berkshire hogs; member of Farmers' Alliance; member of the Agricultural Society (later its President); President of the DeKalb Co., Fair for many years; Democrat, supporting the principles of the Democratic Party as Representative in the Illinois Legislature, 1886-7; for 18 years Road Commissioner of Sycamore Township; President of DeKalb Co. Farmers' Institute; President of Milk Shippers union for farmers contiguous to Chicago; a Universalist--President of the Board of Trustees for several years.

Hiram and Clara were enumerated in the 1870 Sycamore, DeKalb Co., IL, federal census. He was a farmer, age 31, she was 26. Children in the household were George D. 5, and Sanford A. 3. Also in the household was the family of brother Orator.

Hiram and Clara were enumerated in the 1900 Sycamore, Dekalb Co., IL, federal census. He was a landlord, age 61, she was 56. Only three of Clara's five children were still living. Chldren in the household were Arthur H. 24, and Millie F. 16.

Orator F. was a partner with his brother Hiram as a farmer and stock raiser on their parents homestead near Sycamore, Dekalb Co., IL.

Orator and Harriet E. were enumerated in the 1870 Sycamore, DeKalb Co., IL, federal census. He was a farmer, age 27, she was 25. The only child in the household was Howard H. 8 months.

Obtained his early education in country schools; engaged in farming and then entered the lumber business, 1891; formed a partnership, in 1892, with E. B. Shurtleff, lumber and coal business; in 1899, he formed a partnership with his brother, Arthur Hiram, which is still eminently successful; his is President of the Holcomb-Dutton Lumber Co., with branches in Northern Il; a Director in the Pierce Trust and Savings Bank, in the Sycamore B. & D. Association and the Sycamore Chamber of Commerce; active in Civic and Commercial affairs of Sycamore, IL; well known poet and professional entertainer.


Sanford and Clara were enumerated in the 1900 Sycamore, Dekalb Co., IL, federal census. He was a lumber and coal dealer, age 33, she was 30. Clara had not given birth to any children.

Final rites for Arthur Hiram Holcomb, 80, life long resident of Sycamore and a leader in business, civic affairs and in the religioius and social life of the community were accorded thursday afternoon from the Van Natta Funeral Home.

Mr. Holcomb passed away shortly after 7 a.m. Tuesday at the Sycamore Municipal Hospital where he had been a patient for four months.

Rev. H.L. Michael of the Federated Church officiated and paid tribute to the life of the deceased, who has been devoted to home family and church as well as the community.

Many floral tributes evidenced the the high regard in which Mr. Holcomb was held. Interment took place in the Elmwood cemetery.

Until a few months ago, Mr. Holcomb remained active in the business that he and his late brother Sanford Holcomb established in 1899, at its present location on DeKalb Ave., known as the Holcomb Brothers Lumber Yard. When Sanford died in 1940, Arthur Holcomb's son, Edward, entered into partnership with him and it became known as Holcomb Yard.

Always interested in public affairs beneficial to the welfare of Sycamore, particularly in the matter of good roads, Mr. Holcomb served on many committees of the Chamber of Commerce. he was a member of the road Committee since 1919 and was instrumental in securing the improvement of Route 64 from St. Charles to Sycamore.

Born on July 7, 1875 on the Holcomb Homestead farm on the Mount Hunger Road, to Hiram Holcomb and Clara Dowe Holcomb, a prominent pioneer couiple. Mr. Holcomb attended teh Mount Hunger school and was graduated from the Sycamore High School, later attending the University of Illinois.

Mr Holcomb was a devoted member of the Universalist Church, which in 1928united with teh Congregational Church to become the Federated Church. He was treasurer of the Universalist Church for many years, began ushering there in 1898, and later served as president of the Board of Trustees, and when the two churches federated, he was re-elected treasurer serving in that capacity for 16 years as well as continuing his ushering duties.

In Julyof 1955 he was made usher emeritus of the Federated Church. he was also a member of the Elks Lodge.

Mr. Holcomb loved travel and consistently took a vacation every year for fifty years, visiting many varied places of interest.

Mr Holcomb was a charter member of the Kishwaukee Country Club in 1910 and continued as a member for 33 years, being a member of the board for 31 years of that time.

An outstanding event in his life was the 50th anniversary celebration of his 50 years in business at the same location as well as under the same family ownership. The banquet at which some 200 were present to honor him was at the Federated Church.

Preceding him in death were his parents, three brothers, George, Frank and Sanford Holcomb and a sister, Mrs. Mildred Resch.

Came to DeKalb Co., IL, with his parents, 1842. At the time of their arrival there were but 6 or 7 houses in Sycamore; he obtained a common-school education; enlisted 8-27-1862, when the Civil War broke out, serving in the 105th Ill. Vol. Inf., Co., A; served as Deputy Sheriff of DeKalb Co., Ill, until 1872 when he was elected Sheriff; re-elected, 1874-5-8, later being Deputy-Sheriff (31 years as Sheriff or Deputy); his ability as a detective recognized over a large part of the state.

Reuben and Cora were enumerated in the 1870 Sycamore, DeKalb Co., IL, federal census. He was a constable, age 30, she was 29. The only child in the household was Jessie M. 9 months.

Reuben was enumerated in the 1900 Sycamore, DeKalb Co., IL, federal census. He was a constable, age 60. He was a lodger in a hotel.

Served in the Civil War as a private in Company F, 132 Illinois Infantry. Repuiblican; Sheriff of Dekalb Co and Deputy Sheriff for many years; Universalist; Mason.

b. circa 1843
Ellen Holcombe was born circa 1843 at IL.1 She was the daughter of Fleming Holcombe and Louisa Stone.

b. May 1851
Ida Hubbard was born in May 1851 at VT.1 She was the daughter of Nelson Hubbard. Ida Hubbard married Orator S. Holcombe, son of Fleming Holcombe and Louisa Stone, on 4 October 1916.