She was a lifelng resident of the Gibsonburg area and was bory July 18, 1903, in Scott Township. She was a daughter of B. L. Smith and Maude (Garner) Smith of Helena. She and Mr. Holcomb were married in Fremont September 12, 1922.

Surviving are sons, David II, Richard, William, Michael and John all at home; Merle of Gibsonburg and George, in the Army at Fort Benning, GA; brothers, Richard of Helena, Herbert of Burbank, Calif., David of Clyde and Virgil Smith of Bradner; a sister, Mrs. James Alcorn, Temperance, Mich., her parents and three grandchildren. She was preceded in death by a brother and a sister.

Friends may call at Veh and Son Mortuary, Gibsonburg. Services will be conducted at the mortuary, Monday at 2 p.m. by the Rev. H. M. Maurer. Burial will be in Quinshan Cemetery.

David was a member of Restored Church of God.

David is survived by brothers, Richard and John of Gibsonburg and Michael of Florida.

He is preceded in death by parents; and brothers, Merle, William, and George.

Born in Gibsonburg on Nov. 12, 1927, Richard was one of seven boys of David D., Sr. and Lucille (Smith) Holcomb. As a graduate of Gibsonburg High School, he served our country, enlisting in the Army during the Korean Conflict. He was a Medic, enlisted from Sept. 22, 1950 and discharged on Sept. 22, 1952.

Richard then began working as a laborer for the former Pfizer Lime Plant where he later retired. In his younger years, Richard was known to enjoy the outdoors, hunting and fishing.

He is survived by brothers, John of Gibsonburg and Michael of Florida; and many nieces and nephews.

Richard is preceded in death by his brothers, David, Jr., Merle, George and William.

Visitation will be Sunday, July 2, 2017, noon-2 p.m., at the Herman-Veh Funeral Home & Cremation Services, Gibsonburg where Funeral Services will begin at 2 p.m. Burial with Military Rites will follow at West Union Cemetery, Gibsonburg.

Memorial donations may be directed to Bethesda Care Center, Fremont. 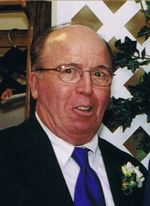 In1950, Gay graduated Jackson-Burgoon High School. She went on to work for Pearce Insurance in Fremont and Securance Service in Woodville as a secretary until her retirement in 1997. Gay loved playing cards and attending her grandchildren's sporting events. She was a member of Bethlehem Lutheran Church, Pemberville.

On October 21, 1950, Gay married Merle Holcomb. He preceded her in death on Sept. 24, 2006. Surviving are their children, Doug (Janell) Holcomb of Fremont, Jeff (Linda) Holcomb of Gibsonburg, Denny (Christi) Holcomb of Sugarland, TX, and Amy (Rod) Lanning of Bowling Green; 11 grandchildren; 15 great-grandchildren with one due in August; and sisters-in-law, Linda Holcomb of Gibsonburg and Pat Smith of Oak Harbor. She is also preceded in death by her parents and brother, Terry Smith.

Family and friends will be welcomed to the Herman-Kinn-Veh Funeral Home & Cremation Services, 319 W. Madison St., Gibsonburg, OH 43431 on Tuesday, June 30, 2015 from 4-8 p.m. Funeral Services will be held Wednesday, July 1, 2015, 11 a.m. at Bethlehem Lutheran Church, 220 Cedar St., Pemberville, OH 43450 where her body will lie in state one hour prior to the services. Pastor Matt Musteric will officiate, and burial will follow at West Union Cemetery.

Born in Scott Township on Nov. 11, 1932, George was a son to the now deceased David and Lucille (Smith) Holcomb. He graduated from Gibsonburg High School in 1952 and later joined the Army, serving during the Korean Conflict.

George worked at the former Ohio Lime Stone Company in Woodville for over 26 years, retiring in 2001. He was a member of the Zion Evangelical Lutheran Church in Gibsonburg, the Gibsonburg Post of the American Legion, a former member of the United Steelworkers' Union and a former worker at the Mansfield Speedway. He was known to be a history buff and enjoyed tinkering with outdoor projects. He also was a regular at the Rollersville-Helena School Group Reunions.

He is preceded in death by his parents; son, Randy; and siblings Merle and William.

Funeral services will be on Monday, Sept. 9, 2013, 10:30 a.m., at the Zion Evangelical Lutheran Church in Gibsonburg where his body will lie in state for an hour prior to the services. Rev. Blair Miller will officiate. Friends and family will be welcomed at the Herman-Kinn-Veh Funeral Home & Cremation Services on Sunday, Sept. 8, 1-5 p.m.

Burial with military rites will be at West Union Cemetery, Gibsonburg.

In lieu of flowers, memorial contributions may be directed to the care of his family or the Zion Lutheran Church.

William P. Holcomb, 65, of Gibsonburg died Monday evening in Alvada.
He was born in Gibsonburg to David D. and Lucille I. (Smith) Holcomb. Bill was a 1958 graduate of Gibsonburg High School and U.S. Army veteran serving during peacetime. He was a member of Trinity United Methodist Church, Gibsonburg, and participated in its Sunday school and Bible study group.

He enjoyed his grandchildren's athletic games and playing on an area men's softball league himself. Bill was a former member of the Toastmasters group and devoted his life to the Lord and tried living by His word.

Surviving are children, Jerry Muncy of Fremont, Edwin Muncy of Hillsboro, Ohio, Charlene Miller of Gibsonburg, Kyle Holcomb of Gibsonburg, Michael Holcomb of Alvada and Holly Worthington of Wayne; 16 grandchildren; brothers, David, Richard, George and John of Gibsonburg, Merle of Pemberville, and Mike of Florida. His parents preceded him in death.