Edith A. Holcombe was the daughter of Henry Holcombe and Juna Delph.

Albert Holcombe was the son of Henry Holcombe and Juna Delph.

b. 3 September 1842
Lived on a farm near Bloomington, Ill; moved to Baxter Springs, Kansas, where both died. Almina Holcombe was born on 3 September 1842 at Andover, Ashtabula Co., OH.1 She was the daughter of Joel Holcombe and Orilla Jones.

Walter Ballard was the son of James Ballard and Almina Holcombe. Horticulturist who lived near Baltimore.

Grace Ballard was the daughter of James Ballard and Almina Holcombe. Lived in Oklahoma. 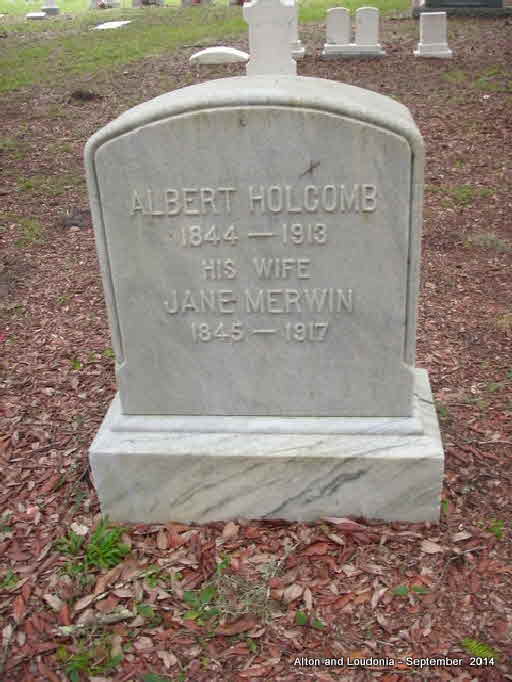 Moved to Bloomington, Ill., in 1864; later moved to Palatka, Florida where both died.

Albert H. Holcomb, for nearly thirty years a highly respected citizen of Palatka, died last Sunday morning shortly after six o'clock, full of years.
One needs to go back but three short years to remember this cheerful, kindly Christian gentleman in the full vigor of life, and as a potent force in the community for all that made for a nobler citizenship. His cheering smile and kindly hand grasp were among the pleasures of the street. Then he was suddenly stricken with paralysis and went into the retirement of his home. His has been a lingering death since, but he was prepared to meet it. Palatka as a city had become accustomed to his absence from the street and the market place, but to his home and intimate friends his life has been an inspiration even through the long days of his decline.

He was formerly a contractor and builder, and later went into the mercantile business. He was identified in his religious life with the Methodist church and was one of the more active in the work of the church. He is survived by his wife and four children, Messrs. Harry, Raymond and Ernest, and Miss Mabel Holcomb, the latter a teacher in the Palatka schools.

The funeral was held from the residence on Monday afternoon at 3:30 and was conducted by his pastor, Rev. W. M. Poage. The interment was in West View Cemetery. The pallbearers were Messrs. R. R. Brakeman, H. A. B. McKenzie, G. S. Bassen, Sr., J. H. Hickenlooper, S. J. Hilburn and Benjamin I. Gay. (Palatka News Obituary dtd Friday, 26 Sep 1913.)

Seaver shows a child "Arner", don't know what he means by that.

Additional information on Henry and his line was found on the web at http://www.geocities.com/~erner/gen/arner/a1340000.htm by Joseph Erner at j.erner@att.net

Henry was enumerated in the 1870 Andover, Ashtabula Co., OH, federal census, in the household of his father and mother, George and Nancy. He was a farm laborer, age 24, born in Ohio.

Warren and Sabrina were enumerated in the 1900 Collinwood Village, Cuyahoga Co., OH, federal census. He was a Locomotive Engineer, age 55, she was 53. Children in the household were George A. 28, and Norman W. 20. Also in the household was mother-in-law, Orilla Holcombe, age 76.

b. September 1844
Warren Clark was born in September 1844.1 He married Sabra Holcombe, daughter of Joel Holcombe and Orilla Jones, on 6 May 1868.

Bertha Holcombe was the daughter of James De Witt Holcombe and Lydia L. Green. Lived on a farm in Iowa.

Lewis O. was enumerated in his parent's household in the 1910 Andover, Ashtabula Co., OH, federal census. He was 22 and a bookkeeper.

Louis O. and Grace E. were enumerated in the 1920 Cleveland, Cuyahoga Co., OH, federal census. He was an auditor in a mine car company, age 32, she was 32. Children in the household were Frances L. 5, and Ruth J. 2 years 3 months.

Simeon was a cigar maker who empoloyed 5 women to roll 36,000 cigars per year at $5 per month.

Lewis Holcombe was born on 29 March 1808 at Granby, Hartford Co., CT. He was the son of Philetus Holcombe and Theodocia Reed.

Lewis and Lovinia were enumerated in the 1850 Granby CT federal census with children Edwin, Hellen, Frances, and Frederick. He was a whip-maker with real estate valued at $3,325. He employed eight men and over 30 women. The men made up to $26 per month, the women a standard $5.

Lewis and Abigail were enumerated in the 1860 Granby, Hartford Co., CT, census with Frances and Frederick.

McPherson lists his marriage to Abigail Galpin as "possible."


There is a Lewis Holcombe enumerated in the 1880 Grand Rapids, Kent Co., MI, federal census. He is 74, a tanner, born in CT. His wife is listed as Galpin Holcomb, 65, born in CT. They have a grandson in the household William Dickenson, 25, born in CT.

Children of Lewis Holcombe and Lovinia (?)

Dan Holcombe was born at Granby, Hartford Co., CT. Moved to Pa. He was the son of Philetus Holcombe and Theodocia Reed.