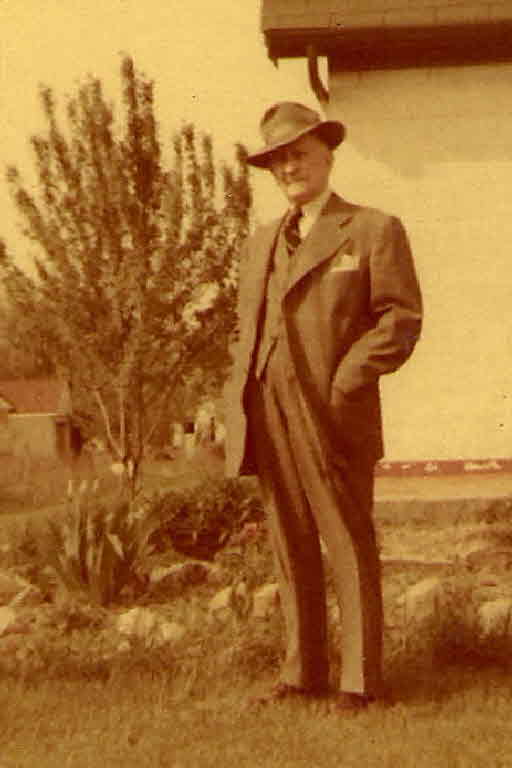 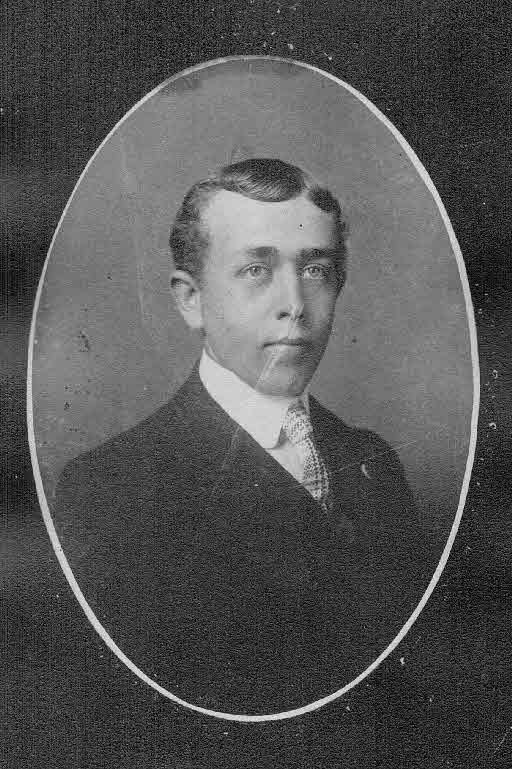 Harry Albert Holcombe was born on 19 June 1880 at Padua, McLean Co., IL.1 He was the son of Albert H. Holcombe and Jane Clark Merwin.

b. circa 1927
Virginia Doris Holcombe was born circa 1927.1 She was the daughter of Robert Lloyd Holcombe and Elsie Miller.1 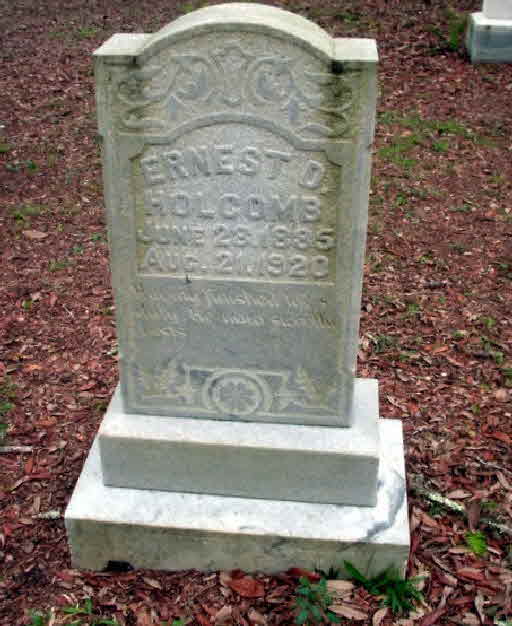 Ernest D. Holcomb, one of Palatka's best known and popular young men, who has been making his home in Valdosta, Georgia, for the past few years, died Saturday morning in Valdosta, following an illness of several months' duration. For some weeks his condition had been regarded as critical by his attending physicians, so the news of his death came as no great surprise to his friends and relatives.
The body was brought here for burial, the funeral being held Monday afternoon at 2:15 o'clock from the family home on Kirby street, Rev. Howard Dutill, pastor of St. James Methodist Church, officiating. The Brotherhood of American Railway Trainmen had charge of the arrangements. The interment was in the family section in West View Cemetery.
The deceased was thirty-five years of age and was a native of Palatka. Here he was educated and reared to useful manhood. Of a sunny, genial nature, he had many friends, who sincerely regret his untimely demise.
He is survived by his wife, one sister, Miss Mabel Holcomb, of Palatka, and two brothers, Harry Holcomb of East St. Louis, and Raymond Holcomb of Denver, Colorado. To these and other relatives is extended the sympathy of the entire community. (Times-Herald Obituary dtd Friday, 27 Aug 1920.)

Rose (Bauer) Holcomb, 88, of Granby and formerly of Bloomfield, passed away on Saturday, July 21, 2018, at MeadowBrook of Granby. Born in Hartford on April 1, 1930, daughter of the late John and Frances (Braun) Bauer, she was raised in Hartford and Bloomfield and graduated as the Salutatorian of her class in 1947. Rose was employed at Connecticut General Life Insurance as a stenographer and typist. She loved her work and continued to work part-time while raising her family. Rose suffered from a stroke at the age of 37, but her will to survive, her strength of character, and her determination allowed her to persevere for another 51 years. As a young woman, Rose enjoyed reading books, camping with her family, boating, sewing, cooking and baking. In more recent years, she enjoyed reading the daily newspaper, watching her SOAP operas and old western movies on TV, painting, and putting together jigsaw puzzles. Her real passion was Bingo and her family often referred to her as the "Bingo Queen". Most of all, Rose will be remembered for her love of family and all that she taught them over the years. She truly was an inspiration to all who met her including the staff and many residents at MeadowBrook of Granby where she had lived for the last 22 years. She was a devout Catholic and a parishioner of Sacred Heart Church in Bloomfield. She leaves three daughters, Holly H. Pazda and her husband Gary of North Granby, Wendy H. French of Marblehead, MA, and Shelly M. Lombardo and her husband Joseph of West Granby; nine grandchildren, Carrie Pazda of West Palm Beach, FL, Adam Pazda and his wife Chanel of New York, NY, Laura Smith and her husband Vincent of West Hartford, Erin Morrissette and her husband Seth of Richmond, VT, Ryan French and his wife Marcy of Simsbury, Peter French and his wife Hilary of Crested Butte, CO, Zachary Lombardo of Hartford, Benjamin Lombardo of Suffield, and Cole Lombardo of West Granby; four great grandchildren, Hailey and Drew DuBois both of Simsbury, and Lillian and Abigail Morrissette both of Richmond, VT; and many nieces and nephews. She was predeceased by a brother, George Bauer; and two sisters, Margaret Johnson and Barbara Fletcher. Her family will receive friends on Friday, July 27, 5-8 p.m., at the Hayes-Huling & Carmon Funeral Home, 364 Salmon Brook St., Granby. A Mass of Christian Burial will be Celebrated on Saturday, July 28, 10 a.m., at Sacred Heart Church, 26 Wintonbury Ave., Bloomfield. Burial will follow in Mountain View Cemetery, Bloomfield. Memorial donations may be made to MeadowBrook of Granby, Attn: Recreation Dept., 350 Salmon Brook St., Granby, CT 06035 or to Connecticut Community Care, Inc., 43 Enterprise Dr., Bristol, CT 06010. For online condolences please visit, www.carmonfuneralhome.com.

Child of Charles B. Holcombe and Sarah Fisher

HOLCOMB. Brigitte (Hoffmann) Holcomb, 58, of Gary Road, Enfield, died Saturday (Nov. 30, 1996) at home. Born in Baumholder, Germany, she came here in 1959, and lived in Enfield for 36 years. She was a retired 19 year employee of St. Joseph's Residence, retiring in November of this year. She was the widow of Chester A. Buckman who died in 1974. She leaves her husband, Edward Holcomb; two sons, Timothy and his wife, Teri Alevo of Feeding Hills, MA, Martin Buckman of Enfield; three daughters and their husbands, Joann and Kevin Malloy of Enfield, Judith and Edward Glende of Wilbraham, MA, Susan and Michael Homiski of Preston; a brother, Walter Hoffmann of Baumholder, Germany; four sisters, Cristel Fleming of Berlin, Germany, Gretel Nieter of Frankfurt, Germany, Lisel Wilrich and Carmen Rice, both of Edaoberstein, Germany, and seven grandchildren. The funeral will be Wednesday, 10 a.m., Lutheran Church of Our Redeemer, 20 North St., with Burial at the convenience of the family. Calling hours are today, Leete-Stevens Enfield Chapels, 61 South Road, from 6-9 p.m. Donations may be made to the American Cancer Society, 45 Wintonbury Avenue, Bloomfield, CT 06002-2470 or to the Lupus, 45 South Main St., Room 208, West Hartford, CT 06107.

Fred C. Holcomb, 69, died at 8 o'clock Sunday evening at his home in the southwestern part of Garden Plain township, eight miles northwest of Erie. His death followed an illness of over a year. The funeral will be held at the home Thursday afternoon at 2 o'clock, the Albany lodge, Knights of Pythias, officiating. There will be no minister. Burial will be in DeWitt, Iowa.

Mr. Holcomb was born November 9, 1870, at Janesville, Wis., the son of Charles and Sarah Holcomb. He moved with his parents to Wilkes-Barre, Pa., as a child and when a young man came to DeWitt, Iowa, where he lived until 1917 when he purchased the farm where he resided at the time of his death.

He was married February 14, 1899, to Miss Mary Parrish of New York. She survives him as do three daughters and six sons, as follows: Mrs. Clyde Parker, Morrison; Mrs. Charles Nevans, Albany; Miss Mary Holcomb, R.N., Buffalo, New York; Andrew, Frederick, John, Robert, Edward and Herbert, all of whom reside in Garden Plain. One son, Charles, died in infancy. He is also survived by 14 grandchildren, one sister, Mrs. Myrtle Haney of Sioux City, Iowa, and one nephew, Charles, of Peoria, who has been making his home with the Holcombs.

James Holcombe was the son of Ezekiel Holcombe Jr. and Suzanne Griffin.

The ancestry of James, the husband of Olive Noble, is confused on the internet.

Recent genealogists have researched this in detail: George McCracken, Robert Eric Holcomb, and Carol Laun. Bob Holcomb has summarized the results below.
* * * * * * * * * *

In her 1988 book, “Thomas Holcomb and other Simsbury, Connecticut Families”, Ms. Deanna Holcomb Bowman attempted to link James as the son of James (Consider, Thomas, Joshua, Thomas), a branch of Holcombs that does not contain a single use of the name Levi till one of James first cousins in Pennsylvania named a son Levi. Neglected by most who had claim to her tie-in was the question mark at the start of her entry. Her proofs were limited to name association and the common location of New York State. The 1790 census for James was from Kinderhook, NY, one hundred miles south of Granville, NY, which leads us to the conclusion that he was at that time over forty-five years of age, married, and had two older males who were teens and/or early twenties in his household. Other sources, without proofs, add that James was married to Ester Ganyard, a descendant of Adam “the mulatto” Rogers (more about this in the DNA section below), and was the James Holcomb who moved to Ohio around 1802 where he did after 1807.

Using the above scenario, James would have been about ten years old at the time of the move from New York to Ohio, but nine years later he ended up much further north in New York married to a local girl of standing, and remained there the rest of his life. The more logical story is that James began and ended in northern New York, and married the girl next door.1
* * * * * * * * * *