Information from http://freepages.genealogy.rootsweb.com/~holcomb/. He was the son of Jonathan Holcombe and Annis Phelps. Alfred G. Holcombe married Lavinnia Hollister.1

b. circa 1826
Annis Holcombe was born circa 1826 at Granby, Hartford Co., CT.1 She was the daughter of Jonathan Holcombe and Annis Phelps.1

Rev. Joseph H. Twichell, pastor of the Asylum Hill Congregational Church, will officiate at the funeral of Mrs. Ellen Holcomb Thompson, wife of William J. Thompson, which will be attended at her late home, No. 282 Farmington avenue at 12:30 o'clock tomorrow afternoon. Additional services will be held at the Union Congregational Church, Rockville at 2 o'clock. They will be conducted by Rev. C. E. McKinley, pastor of the church. The bearers will be Lieutenant Colonel Charles E. Thompson, Samuel A. Bacon, Abram P. Brown, Philo P. Bennett, Arthur P. Bennett and David Calhoun. The Interment will be in the Grove Hill Cemetery, Rockville. 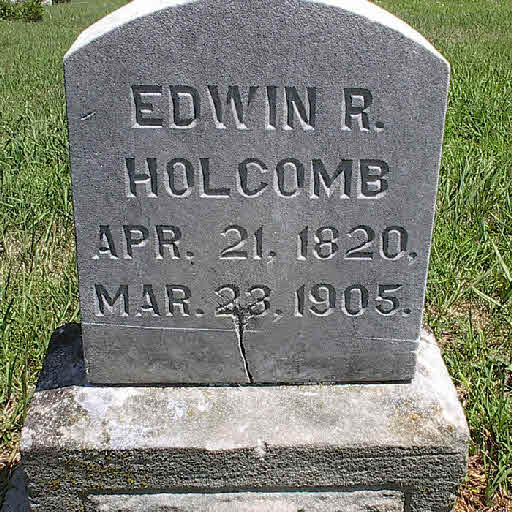 Edwin R. "Hokum" and wife Percillia were enumerated in the 1860 Whiteside Co., IL, federal census. The census image shows them living in Sterling, Montmorency, Whiteside Co. but the database at ancestry.com calls it Mount Pleasant, Whiteside Co. Edwin was a farmer, age 39, she was 35. Children in the household were Jane 15, Charles 10, Horace 8, Huldah 4, Ralph R. 3 months. Father Erastus, age 75 was also in the household.

Widower Edwin was enumerated in the 1880 Pittsburg, Mitchell Co., KS, federal census. He was a farmer, age 60. Children in the household were Ralph 20, and Shirley G. 16, both born in IL.

b. circa 1837
Her married name was Mrs. Frances Holcombe. Frances (?) was born circa 1837 at NY.1 She married Massena Holcombe, son of MA Holcombe.1