Made the first bent wagon shaft known; was a machinist. Celebrated his Golden Wedding anniversary in 1877 with Family Reunion.


Frederick and Mary were enumerated in the 1870 Branford, New Haven Co., CT, federal census. He was a manufacturer of carriages, age 63, she was 58. The only child in the household was Charles 24. 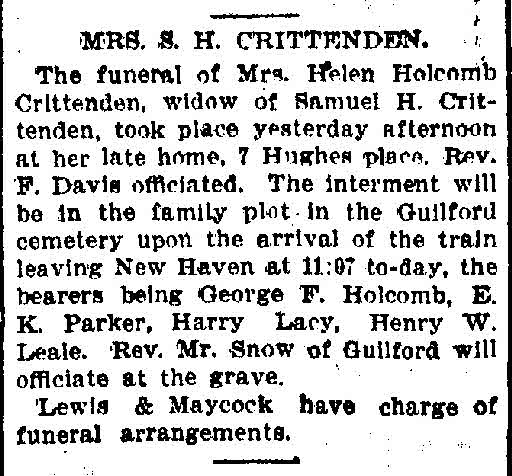 John and Emily were enumerated in the 1870 Branford, New Haven Co., CT, federal census. He was a fish peddler, age 39, she was 35. The only child in the chousehold was Frank 3.

Census records of Branford from 1870 and 1880 show him to be the son of John and Emily.

From the New York Times:

Frank E. Holcombe, who was general manager of the Kelly Springfield Tire Company factory for twenty-one years until it ws moved from here, died yesterday from a heart ailment, after an attack of influenza. He was born in Granford, Conn., sixty-five years ago and was graduated from the Yale Business College. After leaving the tier concern, he became manager of an Akron foundry andlater was with a silica concern. At one time he ws manager of an office of the B. F. Goodrich Company in New York. He belonged to the Masonic Order and the Akron Rotary Club. Surviving are a widow, the former Miss Grace Wilford of Branford, a son, Wilford Holcomb, Akron business man, and a daughter, Miss Esther Holcomb, instruction in a girls' school at Brewster, Mass.

b. 9 March 1833
Fannie T. Holcombe lived at Portland, Multnomah Co., OR. She was born on 9 March 1833 at Branford, New Haven Co., CT. She was the daughter of Frederick Alonzo Holcombe and Mary Rogers.

Geo. F. and Ellen were enumerated in the 1900 New Haven, New Haven Co., CT, federal census. He was a carriage manufacturer, age 65, she was 61. Children in the household were Nellie B. 34, Frederick A. 26, and nephew Frederick 17 (perhaps the son of his deceased brother Henry).


It is perhaps Ellen who is living on Whitney Avenue in the 1920 New Haven, New Haven Co., CT, federal census and listed as "Mrs. George F. Holcomb", age 81. There were no other members of the family in the household.

b. circa 1873
Edith Hart was born circa 1873.1 She was the daughter of Charels E. Hart.1 Edith Hart married Frederick A. Holcombe, son of George F. Holcombe and Ellen Beach.2


Harry and Esther M. were enumerated in the 1870 Branford, New Haven Co., CT, federal census, next door to his parents. He was a manufacturer of carriages, age 24, she was 24. The only child in the household was Anna 1.

Children of Henry A. Holcombe and Mary Wainwright

Mary Wainwright died at South America. She married Henry A. Holcombe, son of Frederick Alonzo Holcombe and Mary Rogers, on 1 May 1862.1

Children of Mary Wainwright and Henry A. Holcombe

Mary W. Holcombe was born at Chili. She was the daughter of Henry A. Holcombe and Mary Wainwright.

Frederick came to New Haven, CT on a sailing vessel at age 9 years from South America to live with his uncle, George F. Holcombe. He moved to Waterbury, CT, when 19 years old being employed in casting shops and mills of manufacturers, rising to manager.


His next move was to Meriden, CT, where he took over the paper box company of his father-in-law, E. J. Doolittle Company. After ten years, he withdrew from the latter company, and during the period of World War II, returned to the Scovill company to aid in the war work efforts. After this, he retired from the concern and spent the remaining years of his life in the peaceful pursuit of landscape gardening in Waterbury.

b. 1812
Amanda Alderman was born in 1812.1 She was the daughter of Chester Alderman and Dorcas Haskins.1