Charles J. and Emma were enumerated in the 1930 Granby census, pagae 8B. He was a farmer age 67, she was 60. There was no one else in the household.

The Roberts Reunion Association prepared a supplement in August 1987.

John and Addie were enumerated in the 1930 East Granby, Hartford Co., CT, federal census. He was a laborer, age 51, she was 49. There were no children in the family.

Children of Addie May Holcombe and John Hoyt Bean II

Amos was tall with a medium build, black eyes and dark hair. 7

McPherson gives his birth date as 1857, but lists him after siblings born in 1870 - probably a typo, his census records would also indicate a birthdate of 1875.

Seth Holcombe found most of this information in a book Genealogy of the Family of William Watson Roberts and Nancy Hoyt (Bean) Roberts.

Robert was enumerated in the 1900 Suffield, Hartford Co., CT, federal census. He was a farmer age 25. His mother M. Louise, widowed age 67, was keeping house.

A. Robert Holcomb, 59, born in Hartland, son of Harvey and Maria Holcomb, died early Thursday morning of heart trouble. Although he had been in ill health for some time, Mr. Holcomb had been confined to his home for only a few weeks. Mr. and Mrs. Holcomb came from West Suffield to Copper Hill, East Granby, 21 years ago.

Mr. Holcomb had been active in town affairs having served for several years as firs selectman, assessor, and on the Board of Relief. He leaves his wife, Mrs. Ida Belle (Cook) Holcombe, a daughter, Mrs. Own Johnson of Hartford, four sons, Amos and Ralph of East Granby, Irving of Southwick, Mass., and Donald of Hartford; four grandchildren; a brother, Charles J. Holcomb, of Granby; and two sisters, Mrs. Cyrus Tripp, of Granville, Mass., and Mrs. John Bean of Springfield, Mass. The funeral will be Saturday at 2 p.m. at the Harold M. Hayes funeral home in North Granby. Rev. Harold I. Zook of the Copper Hill Congregational Church will officiate. Burial will be in West Suffield Cemetery.

Artemas King was an active and prominent man in Suffield. He was highly respected and a man of superior intelligence and judgment, always holding some important town office until he had passed the age of 70. He was consulted on most of the important affairs of the town and many times people from adjoining towns sought his advice. In his early days. He was Capt. of the Militia " Old Guard" and for many years Justice of the peace. In 1868 when he was 69 he notified the town that owing to the approaching age limit of 70 years they must not elect him again as he no longer would serve again. They then elected him Representative and he served two terms in the Legislature at New Haven and Hartford, CT.


Artemas and his brother Theodore inherited a large tract of land from their father who was the largest land owner in Suffield. They afterwards punched the Harmon farm of many acres adjoining their tract. Theodore died in 1857 leaving his share to Horace A King the eldest son of Artemas. After the death of Horace in 1869 Artemas purchased the estate from the heirs and became sole owner, and on his death, he left the property to his children. About 2 years after Artemis died the old homestead burned destroying many valuable records and relics among which was the gun used by his father in the Revolutionary War.

Capt. Joseph King was the son of James King.

James King was the son of William King.

The 1971 Roberts genealogy indicates she was born 15 December 1890 in East Hartland, Ct. and died 21 November 1896 in West Suffield, Ct., The Holcomb Genealogy says she was b. 15 December 1891 and d. 21 November 1896. Although records at the Connecticut State Library suggest that she is buried in the Holcomb Cemetery, Hartland, her stone is in West Suffield Cemetery. It states that she d. 15 Dec 1890 at age 5 yrs. 11 mos. 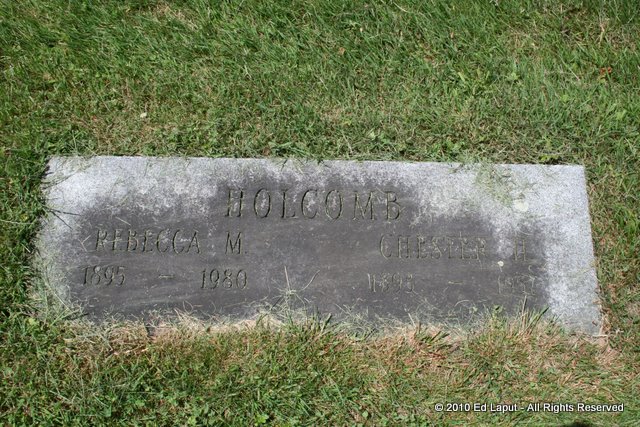 Information on Chester Harvey Holcombe and his family is from Seth Holcombe of the Salmon Brook Historical Society.

Chester was a dairy and tobacco farmer and liked to hunt and fish. Rebecca was a homemaker and practical nurse.

Chester registered for the WWII draft while he was living in Bradenton, FL. He listed Edith Holcombe of West Suffield, CT, as his closest relative.

Burton registered for the WWII draft and was living in West Suffield and he listed Maude as his closest relative.

At the time of his registration for the WWI draft, Henry was working for his brother Chester.

Charles and Irene were 5th cousins.

Charles and Irene were enumerated in the 1930 Granby census, page 7A, living next door to his brother Chester. He was listed as 28, she was 23. He was 24 when married. Apparently, there is no consensus on his birth date. Mildred was also in the household, age 3 years 3 months.

The Courant reports in its obituary that Charles was a dairy/tobacco farmer for many years in Copper Hill. After retiring, he was employed at the Copper Hill Golf Course as greens keeper. At the time he filled out his draft registration he reported he was working for C.H. Holcombe, apparently his brother Chester.

Amos and Evelyn were enumerated in the 1930 East Granby, Hartford Co., CT, federal census, district 112, on the same page as his parents. He was a farm laborer, age 26, she was 23. 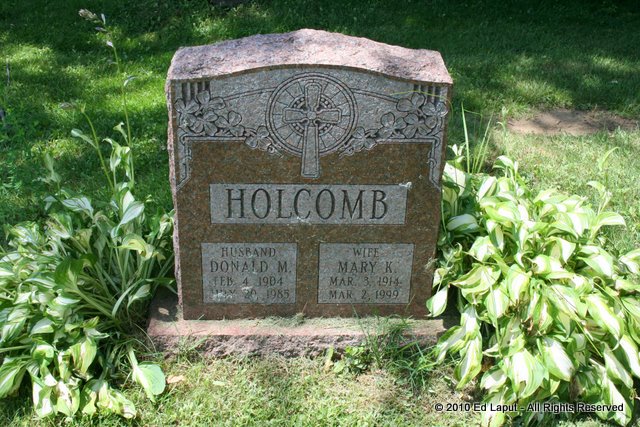 A union carpenter and one of the original members of the East Granby Volunteer fire Department (obituary).


Ralph and Gertrude had no children.

Children of Martha A. Wilder and Charles A. Holcombe

One possibility is that George may be the son of Charles Holcombe, a blacksmith of Belchertown, MA.

b. August 1861
Ellen Holcombe was also known as Nellie Holcombe. She was born in August 1861 at MA.1 She was the daughter of Charles A. Holcombe and Martha A. Wilder.

Lorenzo early in life became an enthusiastic missionary and evangelical preacher, traveling far and wide into the cities, countrysides, frontiers, wildernesses and among the Indians in New England, the Canadian border, NY State and North Atlantic seaboard and its interior preaching incessantly to the extent of this frail physical power. He made a challenging appeal wherever he went. The originality of his doctrines and philosophies, his novel expressions in presenting Christianity, in connection with his most unusual abilities and personality arrested the attention of all classes hearing him until his reputation spread rapidly to most American frontier settlements as well as to the British Isles and beyond.

For one of these appointments to preach he came to one of the NY State communities where Peggy was living in the home of her oldest sister, Hannah and husband and finally lodged, at least, for a meal with them. While there, - out of her presence, - he inquired of her religious attitude. Upon learning of her interest in the spread of Christianity, he soon mentioned to her consideration of their marriage, but made clear to her that he could not relax his missionary work to remain home with a family, saying that she should have two years to consider the sacrifices such a life would impose upon her, before accepting, as he could not accompany him on much of his evangelistic touring.

Within those two years they were married. Peggy did not see him for months at a time, - occasionally as much as nearly a year. In efforts to be with him she did make many long, burdensome trips, - by horseback, on river boats, ocean sailing boats and other uncomfortable and dangerous means of travel. Lorenzo and Peggy sailed 10 Nov 1805 from New York City for Liverpool, England. He next preached in England and Ireland for eighteen months.

Within the first few months after Letitia was born, Peggy became so ill that the infant was found a nurse in the country and after long weeks she was convalescent enough to be also carried to the country nearer the nurse and had the baby brought to see her. It soon died before Peggy saw it again and was buried at Warrington.

After eighteen months abroad they sailed for America, May 6, 1807. Upon landing they soon toured together again, - from the home of Lorenzo's father in Vermont, through Westmoreland, Albany, NY State, New York city meeting appointments for preaching at meetings extending southwesterly across PA, NJ, into VA with stops at Winchester and Staunton, VA, WV, and down the Ohio River on a freight boat which would not take Lorenzo's team. He had to drive it overland to Natchez, Miss. Ter., she following by boat as a loan woman passenger, to Natchez. After a long stay amid the disease, danger and alarm there, they road together horseback to Georgia through wilderness in Mississippi, Alabama and Georgia, sleeping by campfire in the open at nights, settlements being more than a day's journey apart, -often enduring severe weather.

Continuing northward they were in North Carolina, South Carolina, and Virginia, Lorenzo preaching all the while wherever an audience was found until they came again to Lorenzo's father's home in VT. Peggy kept a diary, at least from 9 Jan 1813 to 27 Jul 1818 which was published as a supplement to her book The Vicissitudes of Life in the Wilderness. Compiler has found nothing as to her opportunities for an education. The writings she left show a brilliant mind, unbounding faith and trust in her Creator, thorough accord with her husband's zeal for the souls of people and her noble principles of character and willingness to sacrifice and endure all hardships to advance Christianity.

The mutual devotion of husband and wife was so singularly perfect between them as to excite the highest admiration for the sincerity of their Christianity in foregoing more constant companionship for its promotion.

Throughout her final lingering illness Lorenzo nursed her as he had done through other long illnesses with which she had been afflicted.3

Curbstone Press has a lengthy article on Lorenzo at: Lorenzo Dow

The University of North Carolina at Chapel Hill also has an online biography at: Documenting the American South. 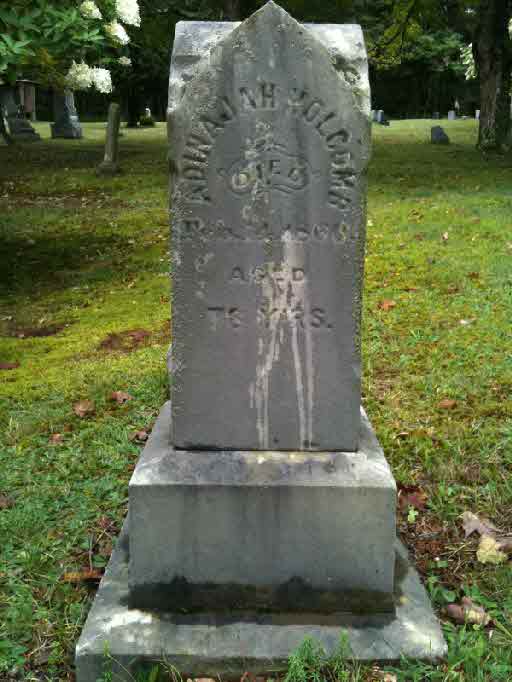 Adonijah and Betsey were enumerated in the 1850 federal census of Colesville, Broome Co., NY He was a farmer age 66, she was 64.. Adonijah Jr. age 11 was in the household as was Orson. Is Adonijah Jr. a son or grandson?

Census records would indicate that all of Betsey and Adonijah's children were born in NY.

Robert Holcombe was the son of Adonijah Holcombe and Charity Gillett.1

Cyprian and Almira were recorded in the 1855 Colesville, Broome Co., NY, state census. He was a farmer, age 57, she was 52. The only child in the household was Vicum 14.

Fred Page was the son of James Henry Page and Fannie T. Holcombe.