b. circa 1910
Edith R. Hayden was born circa 1910 at Washington, DC.1 She was the daughter of Julius A. Hayden and Emma Louise Mattson.

KS Holcombe was the son of US Holcombe.

Children of Homer C. Holcombe and Ella May Loucks

from the Daily Star

ONEONTA -- Claude Holcomb, 88, of Oneonta, died Sunday morning, April 4, 1999, at The Meadows.
]
Claude was born 20 Sep. 1910 in Blenheim, the son of Homer and Ella May (Loucks) Holcomb.
]
Claude moved to the Oneonta area in 1917 and went to work for the New York State Department of Transportation. From 1935 to 1942, Claude lived in Gloversville. When Claude returned to the Oneonta area, he worked for the Otsego Laundry for 25 years and then became a route driver for Hoffmans Dry Cleaners.

Claude was a member of the First United Presbyterian Church of Oneonta.
]
Claude is survived by a special friend, Delphia Merwin of Colliersville; two brothers and sister-in-laws, Donald and Gerry Holcomb of Oneonta and Walter and Mary Holcomb of Blue Springs, Mo; a sister-in-law, Doris Holcomb of sidney; and nieces and nephews.

He was predeceased by two brothers, Byron and Norman Holcomb.

Funeral arrangements are by the Bookhout Funeral Home, Oneonta and Otego.


A life long area resident, he worked for Oneonta Sales as a parts and service manager, a position that he held for over 50 years.


He was also a former life member of the Oneonta Elks Club.


Don was an avid gardener, but most of all was a loving and caring husband, father and grandfather and will be deeply missed by all that knew him.


Arrangements are by the Bookhout Funeral Home of Oneonta.


She married Donald Holcomb on Oct. 10, 1942, in St. Mary’s Church in Oneonta. Mr. Holcomb died Dec. 5, 2002. Geraldine and Donald had just celebrated their 60th anniversary before he passed away.


Gerry loved to bake and cook, having shared many meals and family gatherings in her home. Gerry and Don were always the cornerstone of the family, and it was their strong sense of family that kept everyone together.


She is survived by her two daughters, Donna Beers and her husband, John, of Andes, and Judy Sobers and Arlene Nygren of Oneonta; her sisters, Jane Conklin of Oneonta, Irene Giotto of New Hartford, and Nancy Holling and her husband, Don, of Horseheads; and her sisters-in-law, Mary Holcomb of Missouri and Doris Holcomb of Sidney. She is also survived by her grandchildren, Grace Healey and her fiance, Robert Howard, of Delhi, Rick Sobers Jr. and his wife, Dee Decker, of Mesa, Ariz., Donnie Beers and his wife, Devon, of Oneonta, and Geri Lynn Sobers and her partner, Jamie Delamater, of Oneonta; her two great-grandchildren, Bryant Beers and Mercedes Sawyer; as well as many nieces, nephews and cousins.


Burial will follow at a later date in Mt. Calvary Cemetery, Emmons.


Friends may call from 1 to 2 p.m. Friday, at the Bookhout Funeral Home in Oneonta, at which time the family will be in attendance.


Arrangements are by the Bookhout Funeral Home of Oneonta.

Donna was born on June 18, 1945, in Oneonta, a daughter of the late Donald and Geraldine (Walters) Holcomb. She attended and graduated from Oneonta City Schools.

Shortly after their wedding, they moved to Andes, where John's family was from, and lived there for close to 40 years. Sometime after Donna's parents passed away in 2004, they came back to Oneonta and Donna was so happy to be back because she was moving into her childhood home. She loved being around John and doing things together; she had very special memories of their trips to Seneca and the Finger Lakes.

She had one of the kindest hearts you could ever imagine. She never forgot a birthday and loved her time spent with her family, especially "family night." Family night consisted of a home cooked meal and card games like canasta with her children, and eventually grew to include grandchildren. One of her favorite family night activities was playing Parcheesi with her grandsons.

Donna was definitely a people person. She would go out of her way to say a kind word to strangers she met on the street or sitting out on her front porch with her husband and would always have a friendly greeting for anyone passing by.

Donna is survived by her beloved husband, John Beers of Oneonta; her daughter, Grace Healey and her companion, Ed Murray of Hewitt, N.J; her son, Donald Beers and his wife, Julie of Oneonta; her five grandchildren, Bryant Beers, Xavier Beers, Mercedes Sawyer, Anthony Gallucci and Nicholas Gallucci; her sister, Judith Sobers and her partner, Arlene Nygren of Goodyear Lake and many nieces, nephews and cousins.

She was predeceased by her son, Tracy Lee Beers.

Family and friends are invited to visit between 11 a.m. to 1 p.m. Wednesday, Nov. 5, 2014, at the Bookhout Funeral Home, 357 Main St., Oneonta, at which time her family will receive guests. A memorial service will follow the calling hours at 1 p.m. at the funeral home, with the Rev. Judith A. Thistle, Director of Chaplains at the A.O. Fox Memorial Hospital, officiating.
In lieu of flowers, Donna's family asks that you kindly consider making a donation in her memory to the National Kidney Foundation, Finance Department, 30 East 33rd St., New York, NY 10016.

John proudly served his country in the US Army.

For many years John worked at the creamery and then began driving truck.

Shortly after their wedding, John and Donna moved to Andes where his family was from and lived there for 40 years before moving back to Oneonta in 2004.

John enjoyed trips with Donna to Seneca Lake and the Finger Lakes. He especially enjoyed seeing the old farms. He was a prankster and was always playing jokes on his family. He could never sit still so you would always find him up doing something to keep himself busy. But what brought John the most joy was his grandchildren. He would do anything they needed or asked of him.

Calling hours will be held on Friday, March 3, 2017 in the Bookhout Funeral Home, 357 Main Street, Oneonta from 11:00 am to 1:00 pm. Memorial services will immediately follow at 1:00 pm with the Rev. Judith A. Thistle officiating. Burial will be held in the spring in Mt. Calvary Cemetery. For those who wish, memorial contributions may be made to the Alzheimer's Association, 225 N. Michigan Ave., Fl. 17, Chicago, IL 60601-7633.

To light a candle or send an online condolence please visit www.bookhoutfuneralhome.com Funeral arrangements are by the Bookhout Funeral Home of Oneonta. - See more at: http://obituaries.thedailystar.com/story/john-beers-1937-2017-881741802#sthash.Wxln7MR4.dpuf. 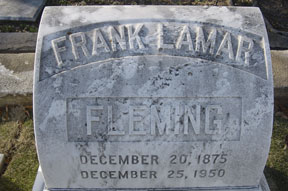 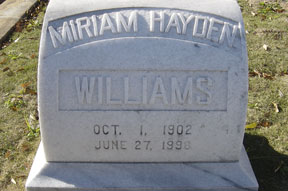 Nellie was enumerated in the 1930 Buckhead, Fulton Co., GA, federal census in the household of brother-in-law Frank Fleming; she was 45.

Harry died when struck by a car while riding his bike.


The One Hundred and Thirty-seventh Infantry Illinois Volunteers was organized at Camp Wood, Quincy, Ill., by Colonel John Wood, and was mustered in June 5, 1864, for one hundred days.

On June 9, 1864, the Regiment left Quincy, and proceeded to Memphis, Tenn., where it was assigned to Fourth Brigade, District of Memphis, Colonel E. L. Baltwick, Thirty-ninth Wisconsin, commanding. On July 9, assigned to Third Brigade, Colonel John Wood commanding, and was stationed on the Hernando road, on picket duty.

The Regiment was mustered out of the United States service at Springfield, Ill., September 4, 1864.

DeWitt and Addie were enumerated in the 1880 Colesville, Broome Co., NY, federal census. He was a farmer age 39, she was 39. Children in the household were Earl 9, and Jessie 3.


DeWitt and Adelia were enumerated in the 1920 Colesville, Broome Co., NY, federal census, ED 68. He was a retired farmer age 79, she was 80. Son Earl was living next door.

b. 1847
Henry Watrous was born in 1847 at Colesville, Broome Co., NY.1 He was the son of John Watson Watrous and Julia Marilla Holcombe.1 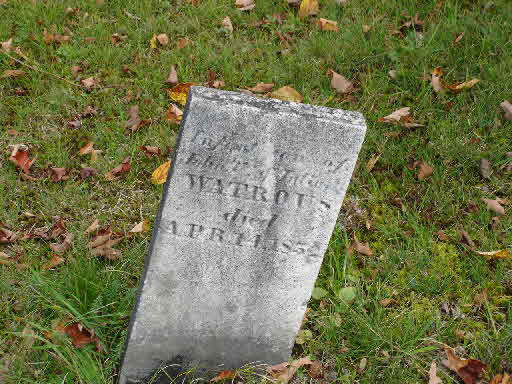 Frank and Jean had three daughters. 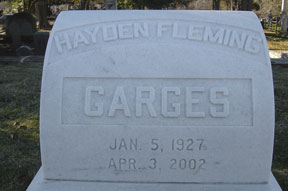 from the Atlanta Journal-Constitution, 5 April 2002:


Hayden Fleming Garges, 75, a native of Atlanta, passed away April 3, 2002. She was a member of First Presbyterian Church of Atlanta, the Peachtree Garden Club, and the Junior League of Atlanta. She attended E. Rivers Elementary School, Washington Seminary and Mt. Vernon College. Surviving is her husband of 55 years, Robert L. Garges; 4 daughters and sons-in-law, Eleanor and Doug Maxwell, Hayden Yow, Leslie and Bryan Bachler and Elizabeth and John Izard, Jr., and 6 grandchildren. Funeral services will be 11:00 AM Saturday, April 6, at First Presbyterian Church of Atlanta, (1328 Peachtree Street N.E. Atlanta, GA, 30309). Dr. George B. Wirth officiating. The family will receive friends one hour prior to the service at the church. Private interment will be in Historic Oakland Cemetery. In lieu of flowers, the family requests donations to Hospice Atlanta, 133 Luckie St. Atlanta, GA, 30303 or charity of your choice. Arrangements made by H.M. Patterson & Son Spring Hill, 404-876-1022.

from Christine Kinlaw-Best of the Sanford Historical Society: 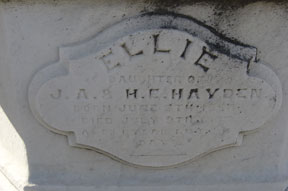 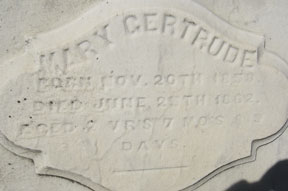 Child of Dorothy May and Governor William Bradford

b. circa 1630
Joseph Bradford was born circa 1630.1 He was the son of Governor William Bradford and Alice Carpenter.1

b. circa 1618
John Bradford was born circa 1618 at Leyden, Holland.1 He was the son of Governor William Bradford and Dorothy May.1