b. 28 May 1803
Augustus and Mary had no children. They adopted the two sons of this brother Ebenezer Wadsworth Hayden when Ebenezer and his wife died the same day. Both boys died shortly following their service in the Civil War. Augustus N. Hayden was born on 28 May 1803 at Chatham, NY. He was the son of Dr. Augustin Filer Hayden and Asenath Harmon.

b. April 1811
Samuel Filer Hayden was born in April 1811. He was the son of Dr. Samuel Hayden and Dorcas Young. 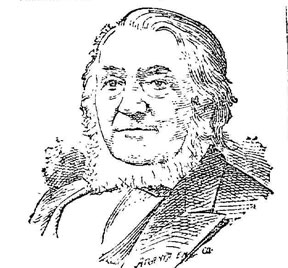 Julius went south early in life, married, remained in Atlanta until about 1882, when he removed to Florida.


Georgia seceded from the Union on 19 January 1861. According to Judge Hayden, there were excellent reasons for Unionists to keep their views to themselves-especially after the decision to secede. "After the ordinance of secession was passed every Union man was muzzled," Hayden said, and "he could not express any opinion at all unless he expressed in favor of secession." The more radical elements in the city now dominated and tried to eliminate dissent and to impose a single, correct view of the conflict between the North and South. "Regulators or investigating committees" quickly came into being, Hayden recalled, with the charge "to see how every man stood. . . . Every Union man they could find who expressed Union sentiments was ordered to leave the State and a good many were whipped or lynched." 2


Hayden's close social ties to influential Atlantans probably kept him from being arrested. He took refuge in his rural residence and, as much as possible, kept out of sight. During the battle around Atlanta, Hayden and his family retreated to their Stewart county farm in southwestern Georgia. Julius was chosen by mayor Calhoun of Atlanta to be in the official party that surrendered Atlanta to General Sherman on September 2, 1864. He and other Unionists were part of the delegation hoping to placate the Union army. However in the conflagration following the surrender, Julius' Atlanta Gas Light Company was destroyed..

JUDGE J. A. HAYDEN
Death of one of Atlanta's Earliest Settlers.
The Burial to Take Place Today - How Judge Hayden Gained the Esteem of his Fellow Citizens, and Helped build up the City.

On Sunday night the news of Judge Julius A. Hayden's death reached Atlanta.

Telegrams which were received yesterday stated that Judge Hayden died at his Orange grove in Florida from the effects of a stroke of paralysis which he had a year ago.

The body will reach here today at 12 o'clock via the Central railroad, and will be taken at once to Oakland cemetery, where the burial services will be concluded.

The following gentlemen have been invited to act as escorts and pall-bearers, and will meet at Patterson's on Loyal street, at 11:30 a.m. today:

Judge Hayden came of a vigorous family. His ancestor, William Hayden, came from England in 1630, and settled in Dorchester, Mass. And one of his Descendants, Luke Hayden, was the father of Judge Hayden.

On the 25th of August, 1810, Judge Hayden was born in Winstead, Conn. His mother was Lucinda Shumate, a daughter of Mason Shumate of French Huguenot descent, who settled in Decatur, Ga. In 1824. (editor's note: this is an error. Lucinda Shumate was Judge Hayden's mother-in-law).

Mr. Shumate kept the first hotel in Decatur. He owned a large quantity of land, and what is now Edgewood was once his hog pasture.

In 1835 there came to this section three men from Connecticut - Julius A. Hayden, William Markham and John C. White.

Messrs. Hayden and Markham knew each other from boyhood. Mr. Markham went to Henry county, where he married Miss. Berry and settled in McDonough. Mr. Hayden located in Decatur, where in 1847 he married Miss. Harriet E. Cone, only daughter of Judge Reuben Cone. Mr. White married Miss Laura Farrar.

All three became members of the First Presbyterian church of Atlanta.

He was a public spirited man, and aided greatly in developing Atlanta. As the first president of the Atlanta Gas company, his prudence and energy made success possible and sure. He built a large number of buildings in the city. The Arlington house, the Austell residence, the building on Broad street next to No. 1 engine house, etc., were built by him.

He was a member of the firm of Healy, Berry & Co., that erected the old state house, the first H. I. Kimball house, DeGive's opera house, the governor's mansion, the Capitol City club house, the Georgia Lottery building, hook and ladder house No. 1, Trinity church, Loyd street church, First Baptist and the Catholic churches, two buildings for Atlanta university, running from Jackson's corner, on Pryor and Alabama, to the corner of Alabama and Loyd streets; Senator Brown's building on Wall street, from Norcross's corner to Grant's building on Marietta street between Fitten's building and Granite block on Broad street-in fact there is scarcely a block or a street in the city that does not contain specimens of their work. They also manufactured their own brick.

By industry and frugality he amassed a good deal of property. At all times he was unassuming and unostentatious. He sold off lots on reasonable terms and gave purchasers as long times as they wanted.

Judge S. B. Hoyt, in speaking of Judge Hayden, said: "He was kind, genial, hospitable, charitable, unselfish and public-spirited in disposition. He had no enemy."

Hon. William Markham remarked of Judge Hayden: "He was a man true to his word and to his friends. He had no enemies. His integrity was unfaltering. No better man ever lived."

This testimonial to his worth is a fitting tribute to the man.

Mr. Reuben Cone, Judge Hayden's father-in-law was judge of the superior court of DeKalb county. He owned between 300 and 400 acres of land in Atlanta. The Arlington hotel stands where Mr. Cone once lived. He donated the ground to the First Baptist and First Presbyterian churches, laid off Marietta street, and Cone street was named after him.

Mr. Hayden married Miss Cone in Decatur on the 5th of January, 1847. Two or three years afterwards he moved into the town of Marthasville.

At the time of his death Judge Hayden was living on his orange grove two miles south of Sanford. There are fifty acres in the grove containing 4,500 trees in full bearing. He and Mr. Markham bought it in 1875 for $30,000. Mr. Markham has since sold out his interest.

Mr. Frank Hayden, his brother, died here about the close of the war. His sister married Dr. Darnall, of Griffin.

The friends and acquaintances of the families of Judge J. A. Hayden, Mr. G. W. Harrison and Mr, H. H. Hightower are invited to attend the burial services at Oakland cemetery, from the train at the union passenger depot at 12 m. today.


from the Atlanta Constitution, 4 December 1899:


Mrs. Judge J. A. Hayden died very suddenly this morning at 12:15 o'clock at the residence of her daughter, Mrs. E. H. Phillips, 11 Cone street, from an attack of congestion. She had been in her usual health up to an hour before the fatal attack.


The body has been removed to the residence of Mrs. H. H. Hightower, 10 West Peachtree.


The funeral arrangements will be announced later.

Children of Judge Julius A. Hayden and Harriet E. Cone

"I notice in some of my ancestors' families some additions, and a few corrections may be made, which I will send you if you wish.

"P.S. I think, if you desire it, I can obtain full records of the families of all my brothers and sisters, although some of them are dead, and some reside in the Confederate States, as they now call them."

After I had arranged the genealogy for "Stiles' Windsor," 1857, I concluded that I must not neglect my business in the farther pursuit of Hayden families. Possibly this letter did not receive a reply from me. At that time there was material offered which I have labored in vain to get of late, and where the record is evidently incomplete. Sidney, was said to be living at Sayre, Pa., last year, but I have been unable to open communication with him of late. Sidney Hayden was born on 1 March 1813 at Colebrook, Winsted Parish, CT. He was the son of Luke Hayden and Ruth Humphrey.

Gaylord and both his wives are buried at Canton. He was a farmer, and drove the stage in Barkhamsted. After living for ten years or so in Barkhamsted, they moved back to Canton in 1866.4 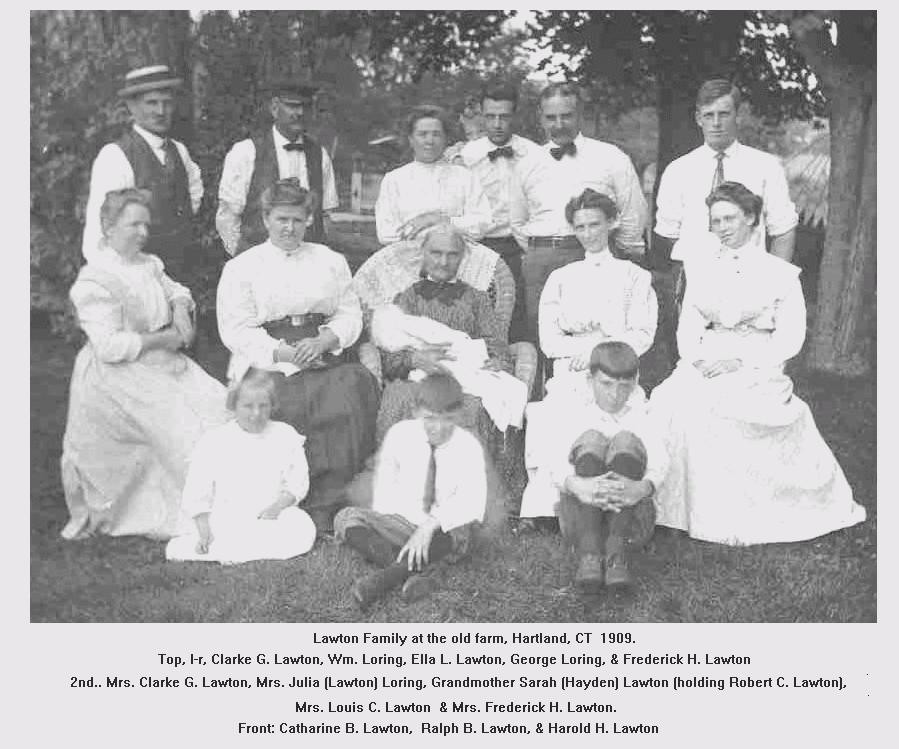 b. March 1807, d. circa 1850
Jabez Hayden had little information about this family. He noted that a son, Samuel Eno, the first born, died in the army in the War of the Rebellion. A second child, a daughter, was born about 1841. There were two more daughters. He does not indicate the mother of any of the children. Austin Hayden was born in March 1807 at West Hartland, CT. He was the son of Col. Nathaniel Hayden and Sally Ransom. Austin Hayden married Sarah Ann Cook. Austin Hayden died circa 1850 at Syracuse, DeKalb Co., IL.