John Minthorn was born on 4 October 1768 at near Hartford, Hartford Co., CT.1 He was the son of William Minthorn III and Hannah (?)1 John Minthorn married Lucinda Sherwood circa 1811 at Canada.2 John Minthorn died on 17 December 1859 at Canada at age 91.1 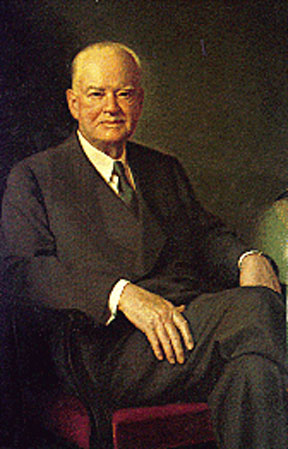 
Son of a Quaker blacksmith, Herbert Clark Hoover brought to the Presidency an unparalleled reputation for public service as an engineer, administrator, and humanitarian.

Born in an Iowa village in 1874, he grew up in Oregon. He enrolled at Stanford University when it opened in 1891, graduating as a mining engineer.

He married his Stanford sweetheart, Lou Henry, and they went to China, where he worked for a private corporation as China's leading engineer. In June 1900 the Boxer Rebellion caught the Hoovers in Tientsin. For almost a month the settlement was under heavy fire. While his wife worked in the hospitals, Hoover directed the building of barricades, and once risked his life rescuing Chinese children.

One week before Hoover celebrated his 40th birthday in London, Germany declared war on France, and the American Consul General asked his help in getting stranded tourists home. In six weeks his committee helped 120,000 Americans return to the United States. Next Hoover turned to a far more difficult task, to feed Belgium, which had been overrun by the German army.

After the United States entered the war, President Wilson appointed Hoover head of the Food Administration. He succeeded in cutting consumption of foods needed overseas and avoided rationing at home, yet kept the Allies fed.

After the Armistice, Hoover, a member of the Supreme Economic Council and head of the American Relief Administration, organized shipments of food for starving millions in central Europe. He extended aid to famine-stricken Soviet Russia in 1921. When a critic inquired if he was not thus helping Bolshevism, Hoover retorted, "Twenty million people are starving. Whatever their politics, they shall be fed!"

After capably serving as Secretary of Commerce under Presidents Harding and Coolidge, Hoover became the Republican Presidential nominee in 1928. He said then: "We in America today are nearer to the final triumph over poverty than ever before in the history of any land." His election seemed to ensure prosperity. Yet within months the stock market crashed, and the Nation spiraled downward into depression.

After the crash Hoover announced that while he would keep the Federal budget balanced, he would cut taxes and expand public works spending.

In 1931 repercussions from Europe deepened the crisis, even though the President presented to Congress a program asking for creation of the Reconstruction Finance Corporation to aid business, additional help for farmers facing mortgage foreclosures, banking reform, a loan to states for feeding the unemployed, expansion of public works, and drastic governmental economy.

At the same time he reiterated his view that while people must not suffer from hunger and cold, caring for them must be primarily a local and voluntary responsibility.

His opponents in Congress, who he felt were sabotaging his program for their own political gain, unfairly painted him as a callous and cruel President. Hoover became the scapegoat for the depression and was badly defeated in 1932. In the 1930's he became a powerful critic of the New Deal, warning against tendencies toward statism.

In 1947 President Truman appointed Hoover to a commission, which elected him chairman, to reorganize the Executive Departments. He was appointed chairman of a similar commission by President Eisenhower in 1953. Many economies resulted from both commissions' recommendations. Over the years, Hoover wrote many articles and books, one of which he was working on when he died at 90 in New York City on October 20, 1964.

Hannah Ruck was born in 1702.1 She was the daughter of John Ruck and Hannah Hutchinson.2 Hannah Ruck married Theophilus Lillie in 1727.1 Hannah Ruck died circa 1767.1 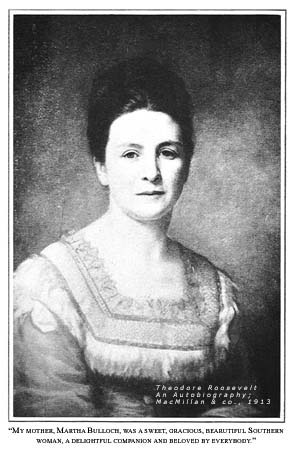 Early in 1851 a 19-year-old Theodore Roosevelt visited Bulloch Hall, where he met young Mittie Bulloch. Two years later, when Mittie journeyed to Philadelphia, Roosevelt met her again. This time he fell in love. On December 22, 1853, Mittie and Theodore were married in the dining room of Bulloch Hall.


In 1864, war came to Roswell. The mills that had been the heart of Roswell's growth were destroyed, and Bulloch Hall was seized by the Union Army as quarters. The Bullochs who had not enlisted fled. Martha would not see the end of the war. She died in October, 1864. Mittie returned to house in 1868, and the current owner permitted her to take a remembrance. Mittie chose her mother's cherished glass doorknob. In 1905 Martha's grandson Theodore Roosevelt (Jr.), then President of the United States, visited the house where his mom grew up. 2 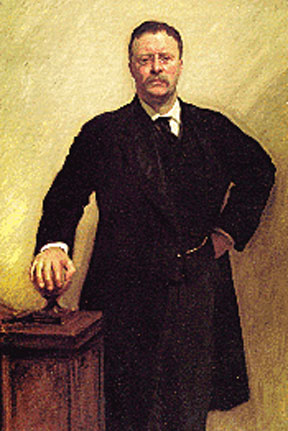 
With the assassination of President McKinley, Theodore Roosevelt, not quite 43, became the youngest President in the Nation's history. He brought new excitement and power to the Presidency, as he vigorously led Congress and the American public toward progressive reforms and a strong foreign policy.

He took the view that the President as a "steward of the people" should take whatever action necessary for the public good unless expressly forbidden by law or the Constitution." I did not usurp power," he wrote, "but I did greatly broaden the use of executive power."

Roosevelt's youth differed sharply from that of the log cabin Presidents. He was born in New York City in 1858 into a wealthy family, but he too struggled--against ill health--and in his triumph became an advocate of the strenuous life.

In 1884 his first wife, Alice Lee Roosevelt, and his mother died on the same day. Roosevelt spent much of the next two years on his ranch in the Badlands of Dakota Territory. There he mastered his sorrow as he lived in the saddle, driving cattle, hunting big game--he even captured an outlaw. On a visit to London, he married Edith Carow in December 1886.

During the Spanish-American War, Roosevelt was lieutenant colonel of the Rough Rider Regiment, which he led on a charge at the battle of San Juan. He was one of the most conspicuous heroes of the war.

Boss Tom Platt, needing a hero to draw attention away from scandals in New York State, accepted Roosevelt as the Republican candidate for Governor in 1898. Roosevelt won and served with distinction.

As President, Roosevelt held the ideal that the Government should be the great arbiter of the conflicting economic forces in the Nation, especially between capital and labor, guaranteeing justice to each and dispensing favors to none.

Roosevelt emerged spectacularly as a "trust buster" by forcing the dissolution of a great railroad combination in the Northwest. Other antitrust suits under the Sherman Act followed.

Aware of the strategic need for a shortcut between the Atlantic and Pacific, Roosevelt ensured the construction of the Panama Canal. His corollary to the Monroe Doctrine prevented the establishment of foreign bases in the Caribbean and arrogated the sole right of intervention in Latin America to the United States.

He won the Nobel Peace Prize for mediating the Russo-Japanese War, reached a Gentleman's Agreement on immigration with Japan, and sent the Great White Fleet on a goodwill tour of the world.

Some of Theodore Roosevelt's most effective achievements were in conservation. He added enormously to the national forests in the West, reserved lands for public use, and fostered great irrigation projects.

He crusaded endlessly on matters big and small, exciting audiences with his high-pitched voice, jutting jaw, and pounding fist. "The life of strenuous endeavor" was a must for those around him, as he romped with his five younger children and led ambassadors on hikes through Rock Creek Park in Washington, D.C.

Leaving the Presidency in 1909, Roosevelt went on an African safari, then jumped back into politics. In 1912 he ran for President on a Progressive ticket. To reporters he once remarked that he felt as fit as a bull moose, the name of his new party.

While campaigning in Milwaukee, he was shot in the chest by a fanatic. Roosevelt soon recovered, but his words at that time would have been applicable at the time of his death in 1919: "No man has had a happier life than I have led; a happier life in every way."