James (Jacobus) Roosevelt was born on 28 February 1692 at New York City, NY. He was the son of Nicholas Roosevelt and Heyltje Jans Kunst.

Nicholas Roosevelt was baptized on 2 October 1658 at New Amsterdam, NY.1 He was the son of Claes Martenszen van Roosenvelt and Jannetje Tomas. Nicholas Roosevelt died on 30 July 1742 at New York City, NY, at age 83.2

b. 27 October 1779
The history of pioneer development in Franklin county (Ohio) records the achievements of Isaac Griswodl, who became one of the earliest settlers of this part of the state and aided in transforming it from a wild and uninhabited region to a district of rich fertility. His labaors wre continued here for more than fifty years, covering the first half of the nineteenth century and he was therefore among those who laid broad and deep the foundation for the present development and progress of this part of the state. A native of Connecticut, he was baorn in Windsor, October 27, 1779, and there spent his early youth on a farm with his parents, Isaac and Christina (Holcomb) Griswold. he was of the third generation who had resided in Connecticut, the family having been founded there at an early period in the colonization of the new world. Isaac Griswold was born on 27 October 1779 at Windsor, Hartford Co., CT. He was the son of Isaac Griswold and Christina Holcombe. 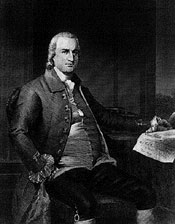 Oliver graduated at Yale College in 1747 and received a commission as captain in the army, in the French war. At the head of a company, which was raised by his own exertions, he proceeded to the defense of the northern frontiers, where he continued until the peace of Aix-la-Chapelle.


At this time he returned to Connecticut, and commenced the study of medicine. He, however, never entered into the practice of the profession, in consequence of receiving the appointment of sheriff of the county of Litchfield, which was organized about the year 1751.


In 1774 he was appointed an assistant in the council of the state. This may be considered as the commencement of his political career. To the office of assistant, he continued to be annually re-elected till 1786. In the interval, he was for some time chief judge of the court of common pleas for the county, and judge of the court of probate for the district of Litchfield.


In the revolutionary contest, Mr. Wolcott was one of the strong pillars of the American cause. He inherited much of the independent feeling of the ancestor of the family. In 1776, he was summoned by his native state to represent it in the national congress in Philadelphia. He had the honor of participating in the deliberations of that body, on the Declaration of Independence, and of recording his vote in favor of its adoption, and of signing the final document.


Immediately after the adoption of that instrument, he returned to Connecticut, and was now invested with the command of fourteen regiments of the state militia, which were raised for the defense of New York. In November, he resumed his seat in congress, and on the adjournment of that body to Baltimore, he accompanied them, and there spent the winter of 1777. In the ensuing summer, he was engaged in several military movements; after which, he joined the northern army, under General Gates, with a corps of several hundred volunteers, and assisted in the memorable defeat of the British army under General Burgoyne. From this period, until 1786, he was either in attendance upon congress, in the field in defense of his country, or, as a commissioner of Indian affairs for the northern department, he was assisting in settling the terms of peace with the six nations. In 1786 he was elected lieutenant governor, an office to which he was, annually elected for ten years, when he was raised to the chief magistracy of the state. This latter office, however, he enjoyed but a little time, death putting an end to his active and laborious life, on the first of December, 1797, in the 72nd year of his age. The life of Mr. Wolcott was extended beyond the common age of man, but it was well filled with honorable services for his country. He merited and received the confidence of his fellow citizens. In his person, he was tall, and had the appearance of great muscular strength., His manners wre dignified. He had great resolution of character, and might be said to be tenacious of his own opinions; yet he could surrender them, in view of evidence, and was ready to alter a course which he had prescribed for himself, when duty and propriety seemed to require it.

Information on Nathan and Lucy and all of their descendants is provided by Al Dawson via e-mail (dc372@cleveland.Freenet.Edu.)

Milton Mason, lifelong Akron resident and veteran of the Civli War, died at the home of his daughter, Mrs. A. J. Stelzer, 1086 N. Howard St., Thursday of exhaustion. He was 78 years of age.

He was born in Middlebury, now East Akron. His parents, early settlers of that place, came here from Connecticut and his father was the first postmaster at Middlebury. Mr. Mason's mother died when he was a child and his father became blind. The child was taken to the home of an uncle where he lived for several years until the uncle joined the ruxh for the California gold fields.

Mr. and Mrs. Solomon Oviat (sic) of Twinsburg, took him to their home where he was reared. When the Civil War was declared he enlisted in the 41st Ohio Infantry and served four years. At the battle of Chickamauga he was wounded in the hand and was crippled for life.

At the close of the war he returned to Twinsburg where he married Miss (JANE) Jennie Springer, another sorphan raised on the Oviat [sic] farm. The couple moved to Akron shortly after the wedding and lived here since that time. Mrs. Mason died abaout 30 years ago and Mr. Mason made his home with Mrs. Stelzer.

He devoted most of this life to engineering but retired from that business a few years after his wife's death. He was a member of Buckley Post, G.A.R. [Grand Army of the Republic].

Funeral services will be held at the home of Mrs. Stelzer at 2 p.m. Saturday. They will be private. Burial will be made at the East Akron Cemetery.

2nd Lt. in the U.s. Army in France WW I. He owned the Mason Brick Company in Detroit.

Mildren A. was enumerated in the 1910 Akron, Summit Co., OH, federal census. She was in the household of her brother-in-law, Adolph J. Stelzer. Charles was not in the household.

Charles and Mildred were enumerated in the 1920 Akron, Summit Co. OH, federal census. He was an attorney age 45, she was 42. They were living next door to Adolph and Edith Stelzer.

Charles and Mildred were enumerated in the 1930 Akron Summit Co., OH, federal census. He was an attorney, age 53, she was 52. There were no childlren in the household. They were next door to Adolph and Edith Stelzer.