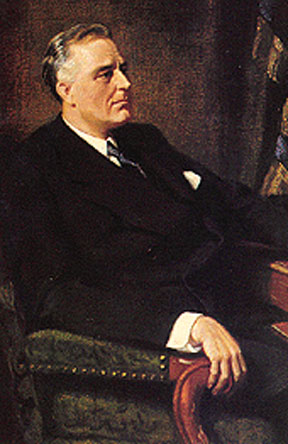 
Assuming the Presidency at the depth of the Great Depression, Franklin D. Roosevelt helped the American people regain faith in themselves. He brought hope as he promised prompt, vigorous action, and asserted in his Inaugural Address, "the only thing we have to fear is fear itself."

Following the example of his fifth cousin, President Theodore Roosevelt, whom he greatly admired, Franklin D. Roosevelt entered public service through politics, but as a Democrat. He won election to the New York Senate in 1910. President Wilson appointed him Assistant Secretary of the Navy, and he was the Democratic nominee for Vice President in 1920.

In the summer of 1921, when he was 39, disaster hit-he was stricken with poliomyelitis. Demonstrating indomitable courage, he fought to regain the use of his legs, particularly through swimming. At the 1924 Democratic Convention he dramatically appeared on crutches to nominate Alfred E. Smith as "the Happy Warrior." In 1928 Roosevelt became Governor of New York.

He was elected President in November 1932, to the first of four terms. By March there were 13,000,000 unemployed, and almost every bank was closed. In his first "hundred days," he proposed, and Congress enacted, a sweeping program to bring recovery to business and agriculture, relief to the unemployed and to those in danger of losing farms and homes, and reform, especially through the establishment of the Tennessee Valley Authority.

By 1935 the Nation had achieved some measure of recovery, but businessmen and bankers were turning more and more against Roosevelt's New Deal program. They feared his experiments, were appalled because he had taken the Nation off the gold standard and allowed deficits in the budget, and disliked the concessions to labor. Roosevelt responded with a new program of reform: Social Security, heavier taxes on the wealthy, new controls over banks and public utilities, and an enormous work relief program for the unemployed.

In 1936 he was re-elected by a top-heavy margin. Feeling he was armed with a popular mandate, he sought legislation to enlarge the Supreme Court, which had been invalidating key New Deal measures. Roosevelt lost the Supreme Court battle, but a revolution in constitutional law took place. Thereafter the Government could legally regulate the economy.

Roosevelt had pledged the United States to the "good neighbor" policy, transforming the Monroe Doctrine from a unilateral American manifesto into arrangements for mutual action against aggressors. He also sought through neutrality legislation to keep the United States out of the war in Europe, yet at the same time to strengthen nations threatened or attacked. When France fell and England came under siege in 1940, he began to send Great Britain all possible aid short of actual military involvement.

When the Japanese attacked Pearl Harbor on December 7, 1941, Roosevelt directed organization of the Nation's manpower and resources for global war.

Feeling that the future peace of the world would depend upon relations between the United States and Russia, he devoted much thought to the planning of a United Nations, in which, he hoped, international difficulties could be settled.

As the war drew to a close, Roosevelt's health deteriorated, and on April 12, 1945, while at Warm Springs, Georgia, he died of a cerebral hemorrhage.

President Franklin Delano Roosevelt and President George Herbert Walker Bush were related; their closest common ancestor was Elisha Hutchinson; they were also related through Henry Spencer ( -1477) and John Howland of the Mayflower. 1 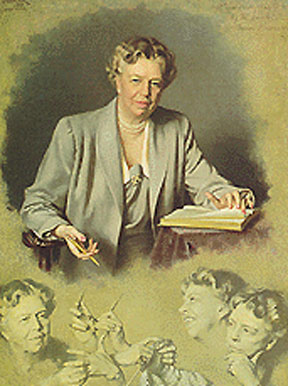 
A shy, awkward child, starved for recognition and love, Eleanor Roosevelt grew into a woman with great sensitivity to the underprivileged of all creeds, races, and nations. Her constant work to improve their lot made her one of the most loved--and for some years one of the most reviled--women of her generation.

She was born in New York City on October 11, 1884, daughter of lovely Anna Hall and Elliott Roosevelt, younger brother of Theodore. When her mother died in 1892, the children went to live with Grandmother Hall; her adored father died only two years later. Attending a distinguished school in England gave her, at 15, her first chance to develop self-confidence among other girls.

Tall, slender, graceful of figure but apprehensive at the thought of being a wallflower, she returned for a debut that she dreaded. In her circle of friends was a distant cousin, handsome young Franklin Delano Roosevelt. They became engaged in 1903 and were married in 1905, with her uncle the President giving the bride away. Within eleven years Eleanor bore six children; one son died in infancy. "I suppose I was fitting pretty well into the pattern of a fairly conventional, quiet, young society matron," she wrote later in her autobiography.

In Albany, where Franklin served in the state Senate from 1910 to 1913, Eleanor started her long career as political helpmate. She gained a knowledge of Washington and its ways while he served as Assistant Secretary of the Navy. When he was stricken with poliomyelitis in 1921, she tended him devotedly. She became active in the women's division of the State Democratic Committee to keep his interest in politics alive. From his successful campaign for governor in 1928 to the day of his death, she dedicated her life to his purposes. She became eyes and ears for him, a trusted and tireless reporter.

When Mrs. Roosevelt came to the White House in 1933, she understood social conditions better than any of her predecessors and she transformed the role of First Lady accordingly. She never shirked official entertaining; she greeted thousands with charming friendliness. She also broke precedent to hold press conferences, travel to all parts of the country, give lectures and radio broadcasts, and express her opinions candidly in a daily syndicated newspaper column, "My Day."

This made her a tempting target for political enemies but her integrity, her graciousness, and her sincerity of purpose endeared her personally to many--from heads of state to servicemen she visited abroad during World War II. As she had written wistfully at 14: "...no matter how plain a woman may be if truth & loyalty are stamped upon her face all will be attracted to her...."

After the President's death in 1945 she returned to a cottage at his Hyde Park estate; she told reporters: "the story is over." Within a year, however, she began her service as American spokesman in the United Nations. She continued a vigorous career until her strength began to wane in 1962. She died in New York City that November, and was buried at Hyde Park beside her husband.

Isaac Roosevelt was the son of James (Jacobus) Roosevelt and Catherina Hardenbroeck.