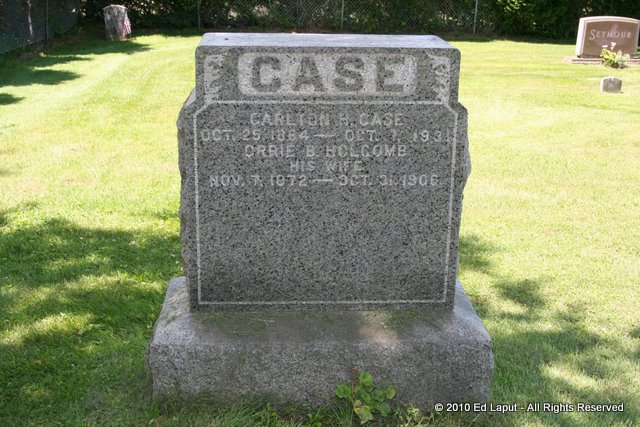 Carleton is recorded in the 1900 Granby census as a carpenter, age 35 with wife Orrie B. and daughters Mertie C. and Nellie C.

HOLCOMB. Maude (Lauzon) Holcomb, 99, of 1486 Mountain Road, West Suffield, widow of Burton K. Holcomb, died Friday (Dec. 1, 1995) at a local nursing home. Born in East Granby, daughter of the late Fred and Ella (Holcomb) Lauzon, she had been a lifelong resident of West Suffield. In her younger years, she attended the Copper Hill United Methodist Church, and was a charter member of the West Suffield Grange No. 199. She leaves a daughter, Madeleine H. Colson of West Suffield; four grandchildren, four great-grandchildren, and a great- great-grandson. She was predeceased by a son, Kenneth R. Holcomb; and a brother, Raymond Lauzon. Funeral services will be today, 2 p.m., at the Nicholson & Carmon Funeral Home, 443 East St., Suffield , with the Rev. Stuart Charter officiating. Burial will be in West Suffield Cemetery. Her family will receive friends prior to the service, 1-2 p.m. Memorial donations may be made to the charity of the donor's choice.


Madeleine (Holcomb) Colson, 86, of West Suffield, wife of the late Howard A. Colson died peacefully on Thursday, (February 12, 2004) at St. Francis Hospital. She was born in Hartford, the daughter of the late Burton and Maude (Lauzon) Holcomb. A lifelong resident of West Suffield, she was a graduate of Suffield Academy.


She is survived by her son and daughter-in- law, Dennis and Linda Colson of West Suffield; a son-in-law, Robert Jones of Burke, VA; four grandchildren, Rod Colson of Colchester, Darryl Colson of West Suffield, Jennifer Crider and her husband Kevin of Forest, VA, and Kimberly Williams and her husband Ron of Wilmington, DE; and four great grandchildren. She was predeceased by her daughter, Joyce Jones and her brother, Kenneth Holcomb. Funeral services and burial will be private at the convenience of her family. Memorial donations may be made to the Emergency Aid Association, 450 South St., Suffield, CT 06078 or a charity of the donor's choice. Nicholson & Carmon Funeral Home has care of arrangements.

He also was a Suffield school bus contractor since 1972.

The funeral will be conducted on Saturday morning in Nicholson & Carmon Funeral Home at 443 East St., with burial in West Suffield Cemetery. Calling hours are Friday evening.

Memorial contributions may be made to the Suffield Firemen's Association equipment fund at 73 Mountain Road, or the Suffield Ambulance Association, PO Box 642, Suffield, 06078.

George B. Foster was the son of John S. Foster and Hepzibah R. Barber. George was a merchant at St. Albans, VT.

Dryden Barbour came to Tama county, in 1858. He was born in Canton, Hartford county, Connecticut, April 4, 1815. He spent his early years on his father’s farm, in the district school, and in his brother’s shoe shop, until, at the age of 19, he went to the State of Alabama in the capacity of a Yankee clock peddler. He continued in that business for seven or eight years, in Alabama, Pennsylvania and Ohio, then he returned to Connecticut, and was married to Miss Jane Wilcox, March 16, 1843, who was also a native of Canton. He bought a farm and remained in his native town six years.

In 1849, Mr. Barbour moved to Wakeman, Huron county, Ohio, where he remained nine years. In the spring of 1858, he sold out in Ohio, and moved to Tama county, Iowa. In 1861, he bought the southeast quarter of section 11, in Perry township, one mile east of Traer, where he still resides with his son Henry, who carries on the farm. Mr. Barbour was the father of six children, three of whom, together with their mother, have passed away.

Dryden and Jane Barber were enumerated in the 1850 Wakeman, Huron Co., OH, federal census. He was a farmer, age 35, she was 34. Children in the household were Alice 5, Hiram 4, and Flavia 2.