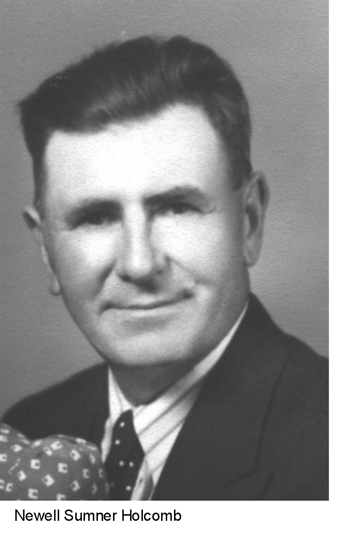 b. March 1886
Grace Holcombe was born in March 1886 at IA.2,3 She was the daughter of Henry Welton Holcombe and Sarah Jane Huffman.1 Grace Holcombe married Raymond W. Kann circa 1910.2,4

b. March 1883
Gertrude Holcombe was born in March 1883 at IA. She was the daughter of Henry Welton Holcombe and Sarah Jane Huffman.1

John and Sophia were enumerated in the 1850 Boone Co., IA, federal census on the same page with her brother Henry. John was a farmer age 32, she was 22. The only child in the household was Henry 3.

b. circa 1829
Philip Hull was born circa 1829 at OH.2 He was the son of Rachel Segler.1 Philip Hull married Saphronia Holcombe, daughter of Benjamin Holcombe and Joanna Eggman, at Boone Co., IA.1

Richard and Lydia were enumerated in the 1860 Bloomfield, Hartford Co., CT, federal census. He was a farmer age 41, she was 41. Children in the household were Elijah 16, Orson 11, Josephiine 5, Edwin 4. There were 2 adults from Ireland also in the household.

Richard and Lydia were enumerated in the 1880 Suffield, Hartford Co., CT, federal census, in the household of brother Rockwell. He was a farmer age 61, she was 23. Children with them were Laura A. 23, and Edwin L. 24.

Joel's wife died, probably by the 1890s after making a will appointing Joel B. as her executor. He and his family had movd from their home at 151 Henry St., Brooklyn, NY, before 1901 when their daughters lived at 96 Pineapple St., Brooklyn. Joel's heirs brought suit before Justice Dickey in Supreme Court in Brooklyn against an attorney named Thrall, decided 15 Oct 1902. 2

Norris was listed in Greer's History in 1888 as a vice president of the Hartford County Agricultural Society.

Norris Holcomb the well-known farmer, cattle dealer and horseman, died at his home on Blue Hills Avenue, Bloomfield, at an early hour yesterday morning after an illness of only two days, aged 66 years. He had been in his usual health and attending to business up to Saturday morning, when he was stricken with kidney and bowel trouble, and sank rapidly. He was attended by Dr. Curtis, a life-long friend.

Mr. Holcomb has been a familiar figure at the fairs and trotting meetings for many years, and few men were better known to New Englanders. His Interest in horses began early in life, and he often presided as starting judge. He had an extended acquaintance with horsemen all over the country, numbering among his friends the Bonners, Shepards, and many others who journeyed to Charter Oak in its halcyon days. He had owned several good horses, among them the grand but erratic Lucy, 2:181/2, whose history is familiar to students of horse matters. He purchased her when there were fewer phenomenal trotters than now, from Mr. Dillut of Philadelphia, for what in those days was an extravagant price--$16,000. After racing her and winning a considerable sum with her, he re-sold her to her former owner for the then princely sum of $16,000. Mr. Holcomb never tired of telling of his various adventures with her and others of his horses, and he was always sure of attentive listeners. Among other well-known totters that he owned in later years was Stonewall Jackson, Old Man's Mare and Nelly Holcomb. Although he practically retired from racing matters some years ago his interest in and love for horses had never waned, and it needed only a word to warm him up to a pleasant reminiscence.

Mr. Holcomb was for years proprietor of the old Adams House on Albany Avenue. Of late years he had given his attention to farming as well as the buying and selling of fat cattle. He had few superiors as a judge of that class of stock.

The Holcomb home has been one of the most hospitable in all the state, especially in these latter years, with Mr. and Mrs. Holcomb striving to make it pleasant and enjoyable for guests.

Mr. Holcomb was the son of Amasa Holcomb, who left a large family. He leaves a wife, who was Miss Angelica Higley. They have no children. A brother, Samuel Holcomb of Meriden, also survives him.

The funeral will be held at the residence on Blue Hills Avenue Thursday morning at 10 o'clock. The body will be taken to Meriden on the 12:25 train for burial.

Angeline, widow of Norris Holcomb of Bloomfield, died from the effects of a fall yesterday morning atthe home of her twinsister, Mrs. William Curtis, of No. 333 Broad street, Meriden. She was before her marriage Miss Higley of Canton. Shortly after Mr.Holcomb's death in te spring of 1898, she moved to Meriden and had lived there since. She was 72 years old. She leaves besides Mrs. Curtis another sister, Mrs. Wells Lawton of Canton, and a niece, Mrs. Martin A. Bidwell of Vine street, this city. There were no children. The funeral will be held at 2 o'clock tomorrow afternoon and will be private.

Samuel A. was recorded in the 1884 Meriden city directory. 2

Child of Samuel Aralga Holcombe and Caroline B. Smith

There is some doubt about the existence of this child, Mary. Seaver is the only source. It is possible that he mistook Amasa's third wife for a child.

Phelps was recorded in the 1884 Meriden city directory. 3

Virginia Belknap Adams Holcomb died on January 28, 2013, at Indian River Estates in Vero Beach, FL. She was born on Oct. 16, 1916, in Yonkers, NY, and moved to Vero Beach 17 years ago, coming from Simsbury. She was a graduate of Katharine Gibbs Secretarial School in New York City, and she subsequently spent several years working in New York for International Business Machines Corporation in systems service. As a long-time resident of Granby, she was an active member of the Granby Tennis Club and the Civic Club of Granby, a student of the piano, of modern dance, and of painting. Survivors include her sister, Marguerite (Peg) Heath of East Windsor, NJ, daughter Gail Adams, of Toronto, Ontario, son Craig Adams of Granby; nieces Ellen Heath of Trenton, NJ, and Susan Yarvin of University Park, MD; sister-in-law Janet R. Utts of East Aurora, NY; and friends in Connecticut and Vero Beach. She was preceded in death by her first husband, Henry Shaw Adams, Jr., and by her second husband, Max Edward Holcomb.

Laura is placed in this family only because she was in the household of uncle Rockwell in the 1880 census.