b. 23 July 1853
Charles Andrew Holcombe was born on 23 July 1853 at Poestenkill, Rensselaer Co., NY.1 He was the son of Orry Howard Holcombe and Elizabeth Ann Long.

Charles and Mary were enumerated in the 1900 Troy, Rensselaer Co., NY, federal census. He was a Coller Pressser. Children in the household were Florence 15, and Ella 9. Mother Elizabeth, 89 was also in the household. Elizabeth had 9 children but only 2 were still living. There is a George Holcombe enumerated on the same page; perhaps the other child.

b. 1 March 1855
George Jesse Holcombe was born on 1 March 1855 at Poestenkill, Rensselaer Co., NY.1 He was the son of Orry Howard Holcombe and Elizabeth Ann Long.

b. 21 July 1857
Ella Frances Holcombe was born on 21 July 1857 at Poestenkill, Rensselaer Co., NY.1 She was the daughter of Orry Howard Holcombe and Elizabeth Ann Long.

b. 26 February 1863, d. young
Louis Long Holcombe died young. He was born on 26 February 1863 at Poestenkill, Rensselaer Co., NY. He was the son of Orry Howard Holcombe and Elizabeth Ann Long.

b. 1883
Josephine Matilda Roberts was born in 1883. She was the daughter of William Carroll Roberts and Ella Frances Holcombe. 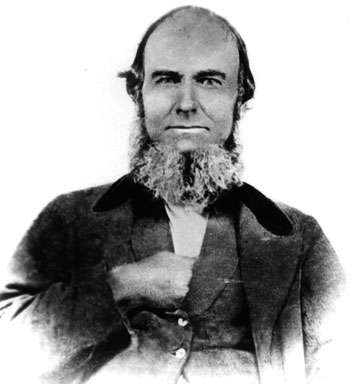 Alson is recorded in the 1850 Granby census, as a farmer, owning real estate, $7,900 and had besides his wife and children, his mother, Rachel, and Chauncey Holcomb, born in Ct., 1830-31 living in his home. Candace was his 1st cousin. Wellington is 5, Shaler is 2.


Almina C. was also recorded in the 1900 Granby census, page 7A, line 29. Irving and Frances were in the household. 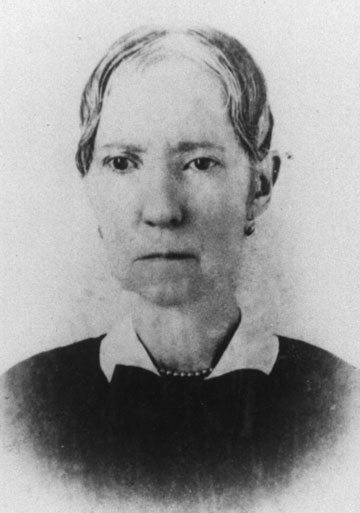 Candace was listed in the 1900 Granby census, page 7A, line 29, widowed. Son Irving and daughter Francis E. were livng with her.

She is called Almina on her gravestone, and Almina C. in the 1900 census.

Benton Holcomb, Granby naturalist and collector of Indian relics, who with his brother, Irving, for years carried on a unique business supplying wild flowers, shrubs, ferns and trees to landscape gardeners and florists, died at his home in West Granby today (March 18) at the age of 80. He had been in poor health for several months.

Mr. Holcomb alway shad lived in Granby and since a young man had been interested in nature. Beginning his collection with specimens of sea shells, he later turned to indian lore and had amassed a wide variety of Connecticut relics and pieces from other states. The indian collection last fall was cataloged and has been loaned to the Eno Memorial soon to be opened in Simsbury.
Wild Plant Authorities

Irving Holcomb, now 76, lives on an adjoining farm and as young men the brothers devoted most of their energies to agriculture. The wild flower business developed gradually at first and came in later years to be their principal occupation. Some of the plants they cultivated on their own land. Many they secured from theproperty of neighbors who granted them the privilege of taking what they wished. Both came to be authorities on the wild plant life of Connecticut. In the last few years they had largely retired from the work.

For several terms Benton Holcomb served the town of Granby as selectman. He had also been a member of the School Board and a director of the Cossett Library in North Granby.
Funeral Sunday

Besides his brother Irving, Mr. Holcomb leaves his wife, one son Ernest L., and two grandsons, Proctor B. and Gardner P. Holcomb of Farmington, a sister, Miss Fannie H. Holcomb in Granby and another brother, Fred L. Holcomb of Hartford.

The funeral will be at the home Sunday at 2 p. m. Rev. Harold I. Zook, pastor of the West Granby Methodist Church, will officiate, Burial will be in Granby Center Cemetery.

b. circa 1870
Grace Armenia Alderman was born circa 1870 at OH.1,2 She was the daughter of Warham Jarvis Alderman and Mary Alderman.1

Ernest was employed at the Royal Typewriter Company for thirty-six years and was president of the Royal Foremen's Club.

Ernest and Lena were enumerated in the 1920 West Hartford, Harford Co., CT, federal census, ED 194, page 19B. Children in the household were Proctor B. and Gardner P.

Ernest and Lena were enumerated in the 1930 Farmington, Hartford Co., CT, federal census, district 138. He was an efficiency expert for a typewriter company, age 42, she was 38. Children in the household were Proctor 17, and Gardner 16.

Ernest and Lena were enumerated in the 1940 Granby census. He was 51, she was 49. The only child in the household was Gardner, 25.

Ernest registered for the WWII draft while living in Granby, Hartford Co., CT. He worked for the Royal Typewriter Company in Hartford and listed Lena as his closest relative.

Lena was a member of Jesus Christ Church of Latter Day Saints in Hartford. She died at home after a long illness.

She was born September 25, 1917, the daughter of the late Raymond E. and Emma G. (Griffin) Case of West Granby, Connecticut. Margaret married to Gardner Preston Holcomb on September 12, 1942, who predeceased her on October 2, 1990.

Margaret and Gardner lived in Simsbury, Connecticut where Margaret taught in the elementary school system for over thirty years. Happy summer vacations were always spent on North Hero where, in 1973, they purchased a home for their retirement. After moving to North Hero, Margaret never lost her love of children and of teaching. She served as a volunteer at the North Hero Elementary School, for which she received a special award in March 2003 at Town Meeting for her many years of service and strong support of the educational system. Margaret loved to read and was a volunteer for the North Hero Public Library. Previously, Margaret participated in the Wonderful Wednesday Children's Bible School of the North Hero United Methodist Church. She was a devoted member of the church and a member of the United Methodist Women. Margaret was always very active in the community, also previously serving as a board member for Champlain Islanders Developing Essential Resources (CIDER).

She leaves two daughters, Betsy Cook of Simsbury, Connecticut and Donna Larose of Alburg, Vermont and one sister, Gertrude Slaughter of Norwalk, Connecticut. Also surviving are three granddaughters, Bonnie (Higley) and Matt Bynum of Pennsylvania, Becca Plote of Vermont, and Alison Cook of Connecticut and a grandson, Joseph Larose of Vermont; three great grandchildren, Deena, Amanda and Nicolas, all of Pennsylvania and countless friends and neighbors. Margaret was dearly loved and will be missed by all who knew her.

Funeral Services will be held at 10:30 a.m. on Saturday, October 4, 2003 at the North Hero United Methodist Church. The Reverend David Adams will officiate. Interment will take place at a later date in the Granby Center Cemetery in Granby, Connecticut. There will be no public calling hours. In lieu of flowers, gifts in Margaret's memory may be made to, CIDER, PO Box 13, South Hero, Vermont 05486, or to a charitable organization of your choice.

Arrangements have been under the direction of the Kidder Memorial Home, Swanton, Vermont.

Proctor Benton Holcomb, 89, of East Granby, formerly of Sebec, ME and West Granby, beloved husband of Geraldine (Cormier) Holcomb, passed away Wednesday, (March 13, 2002) at St. Francis Hospital. Born in Enfield, July 17, 1912, son of the late Ernest and Lena Holcomb, he spent 40 years employed by Royal Typewriter, Hartford, retiring in 1968. He went to Maine and spent 30 years enjoying fishing, hunting, gardening, and lawn mowing. Besides his wife, he leaves a son and daughter-in-law, Bruce and Patricia Holcomb, of Canton; grandsons, Aaron Holcomb of Canton and Wayne Holcomb, of South Carolina; a daughter and son-in-law, Leslie and Gary Thomsen, of East Granby; a granddaughter, Karen Thomsen, of Walpole, MA; and a grandson, Kristofer Thomsen, of Carmichael, CA. He was predeceased by a brother, Gardener Holcomb. Funeral services will be held Saturday, March 16, 11 a.m. at the Hayes-Huling & Carmon Funeral Home, 364 Salmon Brook St., Granby. Burial will be in the Granby Cemetery. His family will receive friends at the funeral home, Saturday, prior to the service from 10-11 a.m. In lieu of flowers, memorial donations may be made to the East Granby Volunteer Ambulance, P.O. Box 100, East Granby, CT 06026.

Geraldine Cormier Holcomb, 95, of East Granby, passed away on October 5, 2017, in Granby. Geraldine was born on July 2, 1922 in Hartford, CT, the daughter of the late Nicholas and Florence (Getts) Cormier. She was married 60 years to the late Proctor B. Holcomb. Geraldine and Proctor lived in Granby till they retired to Maine in 1968. In 2000, they moved to East Granby, CT to be closer to their family. Geraldine loved sewing, rug hooking, quilt making, tole painting, and was an avid reader. She loved to cook and entertain and enjoyed hosting family parties and reunions for many years. Wherever she lived, she volunteered at the local libraries. Geraldine leaves two children, Bruce B. Holcomb and his wife Patricia of Canton, and Leslie Thomsen and her husband Gary of East Granby; four grandchildren, Aaron Holcomb of Granby, Wayne Holcomb and his wife Jennifer of Fort Myers, FL, Karen Thomsen of Plainville, MA, and Kristofer Thomsen of New Washoe Valley, NV; and a great granddaughter, Catelyn Holcomb. Besides her husband, she was predeceased by two brothers, Francis and Robert Cormier; and a sister, Mary Bennett. Her family will receive friends on Monday, October 9, 1-3 p.m., with a service at 3 p.m., at the Hayes-Huling & Carmon Funeral Home, 364 Salmon Brook St., Granby. Burial will be at the convenience of the family in Granby Cemetery, Granby. In lieu of flowers, memorial donations may be made to the F. H. Cossitt Library, 388 North Granby Rd., North Granby, CT 06060, the East Granby Public Library, P.O. Box G, East Granby, CT 06026, or to the Granby Ambulance Association, P.O. Box 617, Granby, CT 06035. For online condolences please visit, www.carmonfuneralhome.com.

Children of Luna (?) and Amasa Holcombe


Aaron and Helen M. were enumerated in the 1900 East Granby, Hartford Co., CT. federal census. He was a farmer, age 73, she was 62. The only child in the household was Fredeick 34.

Children of Aaron L. Holcombe and Helen May Cadwell

Mrs. Helen Cadwell Holcombe, widow of Aaron Holcombe, died at the home of her son, Fred A., Holcombe, of Union district, yesterday afternoon, after a brief illness of pneumonia. She was 78 years old, and a native of Ohio. She lived in East Granby until 1902, when she came to Simsbury to live with her son. She leaves four of ten children. They are: Fred A. and Hattie I. Holcombe of Simsbury, Mrs. W. W. Edgerton of West Granby, and Walter C. Holcombe of West Suffield. The funeral will be held at the home of her son here at 1 o’clock Saturday afternoon. The burial will be in the Granby Cemetery.

Children of Helen May Cadwell and Aaron L. Holcombe

Information from Donna Holcomb Larose (carmi@together.net). Charles' middle name in some sources is "Cadwell" but through her cousin Bruce Holcombe of West Canton, who has a family bible, verifies that his middle name is "Charles".

Walter appears in the 1900 census of Granby, CT, page 10A, line 1, as a farmer, married 17 years with four children living at home (Ina is not listed). In the census his birth is listed as April 1859. 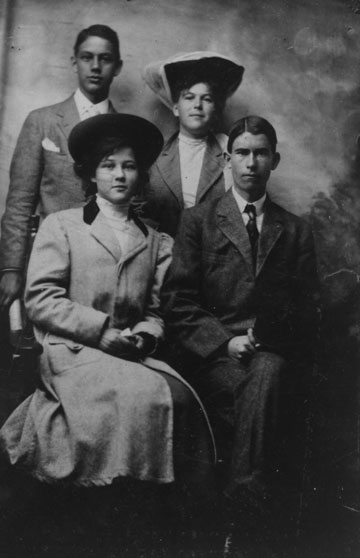 Walter and Minerva were enumerated in the 1930 Bloomfield, Hartford Co., CT, federal census, district 91. He was a factory foreman, age 38, she was 37. His widowed mother Jannette, was also in the household

b. 4 June 1775
Sarah Holcombe was born on 4 June 1775 at Granby, Hartford Co., CT.2 She was the daughter of Joshua P. Holcombe and Sarah Smith. Sarah Holcombe married Levi Griffin, son of Benoni Griffin and Mary DeLacy.

Lyman and Harriet were enumerated in the 1860 Granby, Hartford Co., CT, census with Catherine and a 60-something-year-old Holcombe female.

Oren built the Oren Godard house in Godard Road. He was a shoemaker, tanner and lumber dealer.