b. July 1884
Florence Holcombe was born in July 1884 at NY.1 She was the daughter of Charles Andrew Holcombe and Mary Warr.1

Child of Maria (?) and Irvin Buskirk

Hiram H. and Mary were enumerated in the 1850 Buffalo, Erie Co., NY, federal census, both were 32 and there were no children in the household.

Hirma H. and Abi were enumerated in the 1860 Buffalo, Erie Co., NY, federal census. Children in the household were Ada 5, and Nelly 3. These would have to be Abi's children.

There were no children listed in either census that could have been Mary's, but the Griswold Genealogy says she raised 5.

From the Newburyport News:

Henry A. Christ, 77, of Newburyport, died peacefully at Anna Jaques Hospital in Newburyport on Friday, June 4, 2010 following a short illness. He was surrounded by his loving family and friends. Henry was a beloved husband, father, grandfather, friend, and innovative educator. He is survived by his wife of 25 years, Susan (Thomas) Christ.

Henry was born in New Britain, Conn., Jan. 20, 1933, the son of the late Henry Christ and the late Louise Christ-Osterby. He was predeceased by his sister, Shirley (Christ) Fort.

Mr. Christ was a 1951 graduate of Deep River (Conn.) High School. Following graduation, he enlisted in the U.S. Navy and served as a parachute rigger during the Korean War. After the Navy, Henry earned a bachelor’s degree I elementary education from Central Connecticut College and in 1957 became an elementary teacher in Chester, Conn. He earned a Master’s of Education form the University of Hartford. In 1963 he was appointed principal at Salisbury Memorial School in Salisbury. Seven years later, Mr. Christ became the first principal of the Rupert A. Nock Middle School in Newburyport, a school that quickly earned the reputation as one of the best in the country. Seeking yet another challenge, he took the job of Assistant Superintendent and Business Manager of the Triton Regional School District in 1975.

Upon his retirement from public education in 1988, Mr. Christ worked for the New England League of Middle Schools, an organization of which he was one of the founding fathers in the early 1970s. There he became a well-respected middle school consultant and evaluator of middle schools across the country until his retirement in the late 90s. Henry enjoyed traveling with his wife throughout the U.S. and other countries. He also loved rooting for the Detroit Tigers, his life-long favorite team.

He is survived by his children, Leslie Randall and her husband Dennis, Ronald, and Mark, all of Salisbury, Darlene of Amesbury, and Lisa Bollinger and her husband Erich of Dana Point, Calif; his step-son David Streiff of Newburyport; and his first wife, Claire Amirault of Amesbury. He was the grandfather of Jonathan, Jessie, Charles, and Julia.

Funeral services will be at 10 a.m., Wednesday, June 9, 2010 at Twomey-LeBlanc, & Conte Funeral Home, 193 High St., Newburyport. Burial will be at the Highland Cemetery, Newburyport. Calling hours will be Tuesday, 5 to 8 p.m. at the funeral home. In lieu of flowers, donations may be made to the Newburyport Education Foundation, P.O. Box 1002, Newburyport, MA 01545.

Orson was enumerated in the 1840 Kane Co., IL, federal census.

Albert and Sarah were enumerated in the 1870 Marion, Linn Co., IA, federal census. He a hardware merchant, age 52, she was 46. The only child in the household was Wellington 19. Albert Kendall was born circa 1814 at CT.1 He was the son of Elam Kendall and Flora Hayes.1 Albert Kendall married Sarah C. Higley circa 1845.1

Byron and Caroline were enumerated in the 1880 Elgin, Kane Co., IL, federal census. He was a retired farmer, age 65, she was 61. Children in the household were Adella 26, Alice H. 33, and Floretta 23. Also enumerated was father Elam, 90. Byron Kendall was born on 10 November 1817 at CT.1 He was the son of Elam Kendall and Flora Hayes.1 Byron Kendall married Caroline Bartow on 29 December 1842.2 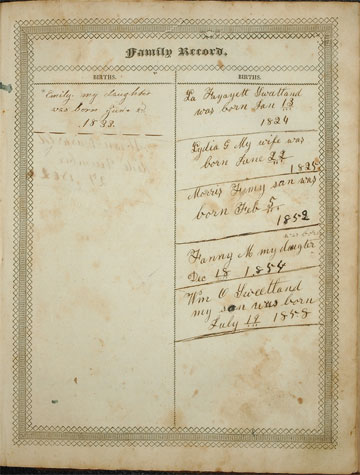 Jerome and Harriet were enumerated in the 1870 Geneva, Kane Co., IL, federal census. He was a retired farmer, age 47, she was 40. The only child in the household was George J. 5. Jerome N. Kendall was born circa 1823 at CT.1,2 He was the son of Elam Kendall and Flora Hayes.1 Jerome N. Kendall married Harriet P. Minor circa 1860.3