b. 8 January 1845
Hon. Theodore Harmon Ristine was born on 8 January 1845.1 He was the son of Ben Taylor Ristine and Rhoda Florinda Humphrey.1

Theodore enlisted in the Union Army, for the ninety days' service, while a student; graduated at Wabash College in 1865, and studied law with his father. He was a lawyer; was in 1882 and again in 1884, a member of the Indiana Senate. Resided in 1884 in Crawfordsville, IN. Elizabeth's father was a professor in Wabash College.2

Hosea graduated at Wabash College in 1869. They resided in Crawfordsville, Ind., where he was a lawyer.2

b. 12 April 1849
Ella Dele Taylor was born on 12 April 1849 at Granville, Bradford Co., PA. She was the daughter of Luman D. Taylor and Betsey Matilda Holcombe.

Jasper only appears in the notes of Neil McDonell.


Widow Rosalie was enumerated in the 1910 LeRoy, Bradford Co., PA, federal census. She was 60. Children in the household were James E., 39, and Minnie 34. Living next door was son Ray M.

Children of Adelbert Holcombe and Ellen A. Palmer

Warren left college when a Junior because of poor health; graduated at Bellevue Medical College in New York City, in 1844. A physician residing (1884) in Crawfordsville, Ind.2

b. 6 May 1854
Florinda Caroline Ristine was born on 6 May 1854.1 She was the daughter of Ben Taylor Ristine and Rhoda Florinda Humphrey.1

Florinda graduated n 1874 from Glendale Female Seminary, Ohio. William graduated from Wagash Colelge, in 1873. He was a lawyer, and a member of the House of Representatives in 1882.2

b. 29 June 1856
Charles White Ristine was born on 29 June 1856.1 He was the son of Ben Taylor Ristine and Rhoda Florinda Humphrey.1
Charles was a farmer residing in 1884 in Crawfordsville, Ind.2

In 1844 they resided in Westfield, Massachusetts.2 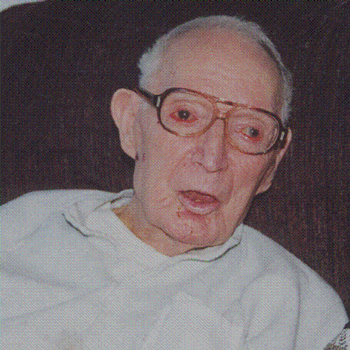 He was given the title "The world's oldest man" by the Guinness Book of World Records He farmed wheat, dabbled in cotton and raised cattle and children for most of his life. His family says he had few vices but he did divorce twice before his third marriage stuck.

From his birth in 1889, his life has mainly ebbed and flowed with Oklahoma's land, weather and waving wheat.

So what is life like for a man entering a third century? "Feels like it did yesterday," Ben, whose descendants number into five generations, told daughter Leona Ford, in June 2000 when he received the title

Exhausted by phone calls from around the world after he made it into the Guinness Book, he slept through most of the following few days. But his children spoke for him at his side in the Carnegie nursing home, where he received daily visits from Ford, his other daughter, Lucille, and son John.

"He says they (the callers) are probably mixed up," Ford said. "he's never known he was old. He's just one of these people who lived one day at a time."

"Life's been fairly good for my daddy," Ford said. "Of course, it was hard."

Benjamin was the 7th and youngest child of Chestnut Wade Holcomb, 45, and Sarah Jane Holcomb, 41. His father fought in the Civil War as an officer on the victorious union side.

The year he was born was also the year of the Oklahoma land run, when huge sections of the future state were opened for white settlers. He was an infant when his family came in a covered wagon and started a farm near the town of Seiling.

They made part of their home a school and Ben started classes at age four. Part of his longevity may have begun then, Ford said. She said his mother breast-fed him until the age of 5, a practice not uncommon in pioneering days.

"I think that might be part of it. He would come home from school and she had a special little rocking chair. She would sit in it and he would stand next to her to nurse."

Learning to read at an early age led to a lifelong pursuit. By the time he entered the nursing home, Ben subscribed to and regularly read about a dozen magazines and newspapers.

Tragedy struck the family when Benjamin was a boy. His father, in his 50s, decided to take the family on a trip to climb Pike's peak in Colorado. On the way, his father contracted pneumonia and died in garden city, Kansas. After that, his mother was left to raise the family.

When he was 15 the boys at school were starting to drink and smoke and she extracted a promise: if he would not drink, smoke, curse or chew tobacco, she would give him a gold watch when he was 25. "I have the watch," Ford said. "It's beautiful."

Eventually Ben started his own farm and he worked it most of his life. He was not called up for the draft in the First World War because he was a farmer with four children, and he was 51 at the outbreak of the Second World War.

But with two sons fighting the Nazis in Europe, he briefly left farming and served as a cook in a military hospital.

Tragedy visited his family again when his oldest son, Chester, a turret gunner in a B-17, went down over the English Channel. His surviving son, John, was taken prisoner during the Battle of the Bulge and nearly died in an Allied bombing raid.

Holcomb's way of dealing with sorrow has been another key to his long life, Ford said. "He's a darlin'," she said. "He cries if a kid gets hurt or an animal gets hurt but he's over it real quick. He just cries and then it's done."

If there is another secret, she said, it is that Ben ate a big breakfast - a big bowl of oatmeal - and not much else for the rest of the day.

"He'd have a real hard day and then he'd kick back when it was done," she said.

Ben did a stint building roads but that did not last long. He traded horses on the side and in later years bred a line of bird dogs. But farming shaped most of Holcomb's life.

Growing wheat on about 200 acres (81 hectares) for more than 70 years, his farm on the edge of Cache Creek near Apache, Oklahoma, yielded enough to feed an estimated 500 people a year for most of his life. He only left it when he moved into a nursing home in Carnegie in 1996.

Ford, her sister, Lucille Bridwell, and her brother, John Holcomb, visited their father every day for six years.

Holcomb over the years was asked the secret to his longevity. "I'll tell you this," Holcomb once said. "If you live one day at a time and you don't die, you'll live a long life."

Holcomb was interested in politics his entire life, Ford said.

He was also an avid hunter, featured in a 1998 Outdoor Life Magazine for being the oldest man, at 107, to shoot a deer.

The two interests collided on a hunting trip to Arkansas.

"All these guys were drinking beer and telling wild tales," Ford said. "Daddy noticed one man who didn't really do any of that.

"He came over to my daddy and his friends and asked them to vote for him for governor. My dad said 'If you ever run for president, I will.'"

The man was future President Clinton.

"Daddy has always been here. This is another day he's still here. I always wonder what it will be like for us when he's gone," Ford said.

"If he's living for a purpose I hope we are fulfilling that purpose. He did the best he could to make our lives good."

Leona Ford, 84, held her father in her arms as he died.

His funeral was at 2 p.m. Friday, December 8, 2000, at First Baptist Church in Apache, arranged by Crews Funeral Home in Apache. Burial was in the Fairview Cemetery in Apache near other members of his family.2,3