b. January 1840
Apparently the Walace listed in the 1850 census of LeRoy, Bradford Co., PA, age 10, in the household of his sister, Fidelia and her husband, Malvin Wooster.

He served in the Army. J. Wallace Holcombe was born in January 1840 at LeRoy, Bradford Co., PA. He was the son of Marlin Holcombe and Electa Bailey.

Mahlon was recorded in the 1850 census of LeRoy, Bradford Co., PA, age 8, in the household of his parents, Martin and Electa.

Mahlon was recorded in the 1870 census of Leroy, Bradford Co., Pa., as a farmer.

Mahlon was recorded in the 1880 census of LeRoy, as a farmer age 39, with wife Mary, mother Electa, brother Albert and son Clinton.

Children of Mahlon A. Holcombe and Mary M. Boothe

Children of Mary M. Boothe and Mahlon A. Holcombe

Laura was recorded in the 1850 census of LeRoy, Bradford Co., PA, age 1, in the household of her parents, Martin and Electa.

Emmett followed the General Merchandise business from his boyhood, working in his father's store until taking up the business with his son; an active member in the Church of Christ, at Leroy since his youth, one of the Elders.


Emmett was recorded in the 1880 census of LeRoy, Bradford Co., PA, age 24, married living in the household of his parents, Hugh and Martha.


Emmett and Jennie were enumerated in the 1910 LeRoy, Bradford Co., PA, federal census. He was a merchant age 55, she was 49. There were no children in the household. The census indicated that they had had only one child, and he was still living.

Emmett A. Holcombe, a lifelong resident of LeRoy, passed away Saturday afternoon after a lingering illness. He was 81 years old.

Mr. Holcombe is survived by his wife and one son, Ernest H. Holcombe of Leroy.

Funeral services were held from the home at 2 o’clock Tuesday afternoon. Rev. Foster Fuller of Williamsport officiating. Burial in the LeRoy cemetery.

Mr. Holcombe was the oldest man in LeRoy, having started in a general store with his father when he finished school, after which he and his son have conducted a general store for the last 35 years. The last two years his health has gradually failed him.

He was a true citizen, always ready to help in any way for the benefit of the community. He was one of the oldest and most active members of the Church of Christ at LeRoy.

Mr. Holcombe is a cousin of Vell B. Holcombe of this place.

"Schuyler was a private in the War of 1812; served in New London, CT under Moses Hayden, Commander, from August 3, 1813 to September 16, 1813; Huldah was living in 1878, age 75 in the Nepaug section of New Hartford." Schuyler Holcombe was born on 27 January 1793. He was the son of Phinehas Holcombe and Elizabeth Gibbs Moore. Schuyler Holcombe married Huldah Crow, daughter of Schubael Crow and Huldah Adams, on 9 December 1813 at New Hartford, Litchfield Co., CT. Schuyler Holcombe died on 13 September 1819 at age 26.

Harmon built the house later known as "Hillcrest" opposite his father's dwelling and across the road; in exchange for life care of his father, Harmon inherited the family farm and later tore down the house where Phinehas lived; on that foundation in 1913 John M. Holcombe built the dwelling known as "Overledge".

Harmon represented Windsor in the Connecticut Assembly in 1849; he was listed as a resident, 81 years old, in a compliation there in 1844.

Mr. Douglass Williams died very suddenly Tuesday afternoon. He was out riding during the day and had been on the street that afternoon feeling quite well. He went home and sat down, complaining of feeling badly and died almost immediately. Mr. Williams was a man much respected in this community and his sudden death was a shock to all, although his ill health for some time past made it apparent that he could not live very long; but none expected the death angel would come so soon. He probably died of heart disease. The funeral will be Friday afternoon at 2 o'clock in the Baptist church. 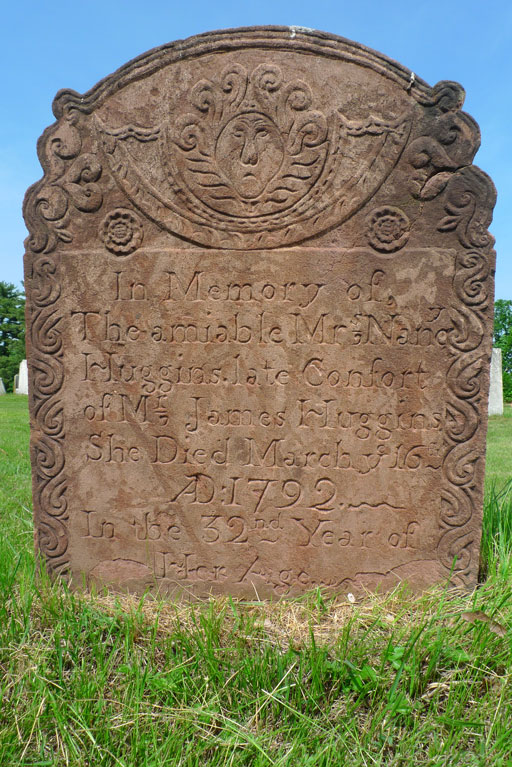 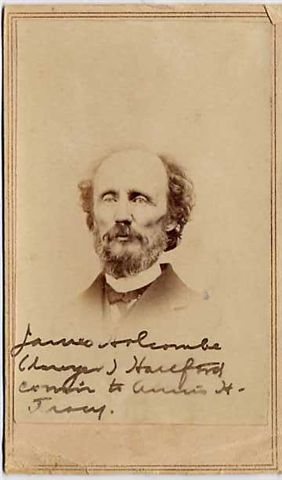 James Huggins Holcomb was baptized in the Town Hill Congregational Church, New Hartford, Connecticut in June of 1807; by letter of transmittal he joined Center Church, Hartford in February of 1834. In 1822 his name is inscribed as a pupil in Dr. Cooley's School in Granville, Massachusetts, where he boarded with Mr. Haines, who reported to the former's mother that the young pupil studied hard and was a good scholar.

James Huggins Holcomb was one of the first members of the Hartford County Bar Association and began the practice of law in Hartford in 1834. One of the very early members of the Republican Party, he was Clerk of the Superior Court from 1838 to 1842, Clerk of the House in 1845 and of the Senate in 1847.

In 1840 James Huggins Holcomb purchased the land and dwelling at 79 Spring Street, Hartford, which in the next 110 years was to be occupied by six generations of Holcombes.

In March of 1873, he, his wife, their son James and daughter "Kitty" (Sarah) left for Europe, intending a trip of "a couple of years"; however, Kitty died in February 1874; James Huggins Holcomb died in 1889 and James Winthrop died in 1910; after that Emily Merrill (Johnson) Holcomb returned to Hartford, where she lived at the Highland Court Hotel on Windsor Avenue, about opposite Belden Street.


James and Emily were enumerated in the 1850 Hartford, Hartford Co., CT, federal census. He was an attorney, age 43, she was 25. Children in the household were James W. 4, and John M. 2. Also in the houeshold was his mother, Nancy 66.

Mr. James H. Holcombe, for many years a resident of Hartford, died after a brief illness, on the 18th of last month, at Positano, Italy, where he has been living for a year or more.

Mr. Holcombe was born in Granby, in this state in 1806, and was in his 84th year, being one of the oldest members, if not the oldest, of the Hartford bar. He began the practice of law here in 1834, and his first law partner was the Hon. James Dixon. Afterward he was with James O. Walkley and Judge Z. A. Storrs. He was clerk of the superior court from 1838 to 1843, when he was succeeded by Thomas H. Seymour. Mr. Holcombe was clerk of the house in 1845, and of the seenate in 1847. He was never of vigorous health, and his strength failing, he went abroad, with his wife and daughter and one son, in 1878 and has lived there ever since, returning only once to Hartford in that period. His daughter died the first year of their absence. His home has been most of the time in the even climate of Italy, for several years in Capri, though he also traveled a good deal; and Positano, where he died, was chosen because of its general healthfulness.

William Thorpe died Monday 14th, he was the son of Addison Thorp and his wife Susan, the sister of Herman (should read Harmon. SPH) Holcomb, Sr. of West Hill. Mr. Thorpe has been out of health for the past three years, though he was confined to the bed but a few days before his death. He has lived in the family of J. Henry Merrill and his mother for over 24 years and it was there, in the old Roswell Marsh place, that he died. He leaves a little property and a considerable collection of Indian relics. He was never married. He was buried Monday at 2 o'clock on Town Hill by the side of his father and mother.

The auction sale of the effects of the late William Thorp, at the house of Miss Catherine Merrill on West Hill, drew out quite a large and interesting crowd of bidders. The Indian relics, consisting of arrow and spear heads, tomahawks, pistols etc. were an interesting feature and their possession was hotly contested for by different bidders. William Thorp was born on 21 July 1821. He was the son of Addison Thorp and Susan Holcombe. William Thorp died on 14 August 1887 at Dysentry; Old Roswell Marsh Place, New Hartford, Litchfield Co., CT, at age 66.