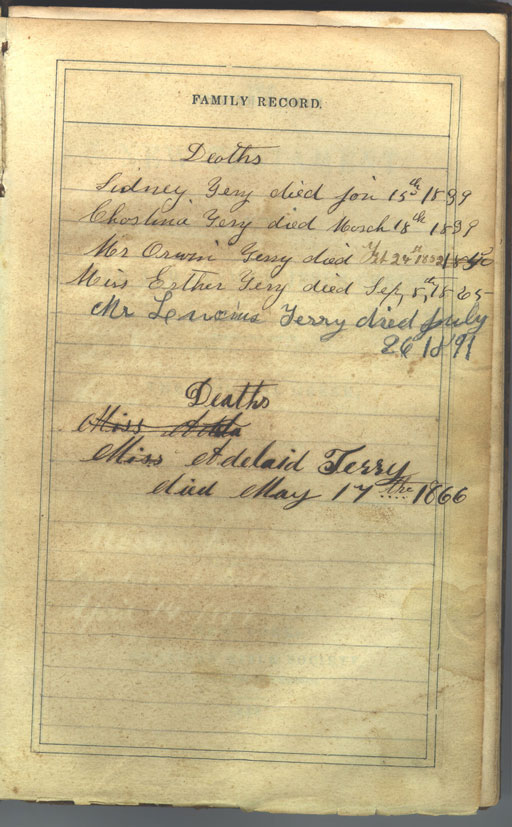 Lucius and Nancy were enumerated in the 1880 Windham, Windham Co., CT, federal census. He was a painter age 38, she was 36. The only child in the household was Caroline, 8.

Frank and Caroline were enumerated in the 1920 College Hill, Beaver Co., PA, federal census. He was a steam fitter, age 56, she was 48. Daughter, Eleanor L. and her husband William J. Reed were also in the household, as was widowed mother-in-law, Nancy Terry, age 75.


Frank and Carrie were enumerated in the 1930 Beaver Falls, Beaver Co., PA, census, living at 3231 College Avenue. He was 65, she was 58. Daughter Eleanor 37 and husband William Reed 39, were also in the household with mother-in-law, Nancy Terry, now 86.


An undated obituary found in the Terry-Holcombe bible reads as follows:


Frank A. Shattuck, aged 84 years, died Friday afternoon in his home, 3231 College avenue, after an illness of two months' duration. Born in Chicago, Ill., the deceased had lived in this community for the past 58 years.


Mr. Shattuck retired two years ago after 35 years' employment with the Ingram-Richardson Manufacturing company as a watchman. He was a member of the Christian church of Beaver, and a charter member of the Knights of Malta.


Friends will be received after 7:00 o'clock this evening in the A. D. Campbell funeral home.

Children of Caroline N. Terry and Frank A. Shattuck 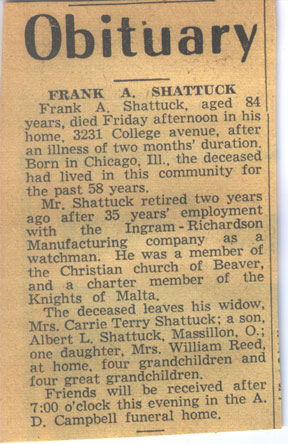 Children of Frank A. Shattuck and Caroline N. Terry

b. circa 1891
William Reed was born circa 1891 at OH.1 He married Nellie Louisa Shattuck, daughter of Frank A. Shattuck and Caroline N. Terry.

Hannah was captured by Indians and killed on the 5th day of the march toward Canada. 2

b. August 1680
Thomas Weller was born in August 1680 at Northampton, Hampshire Co., MA.1 He was the son of John Weller and Mary Alvord.1

b. 4 December 1682
Experience Weller was born on 4 December 1682 at Northampton, Hampshire Co., MA.1 She was the daughter of John Weller and Mary Alvord.1