Children of May Leseta Bonnell and Otis Gilbert Holcombe

The 1900 Dresden, Washington Co., NY, federal census has a James, born Mar 1841, with wife Emma born April 1838. They had been married 4 years. Emma had three children, all still living.

Children of Charles John Holcombe and Charlotte A. Stone


Linus and Sarah were enumerated in the 1910 Whitehall, Washington Co., NY, federal census, ED 122. He was 64, she was 59. Children in the household were Linus 20, and Kathleen 6, and adopted child born in Vermont.

Lewis and Margaretta were enumerated in the 1920 Dresden, Washington Co., NY, federal census. He was a farmer age 68, she was 54.

From an undated, unknown newspaper:

Lewis Holcomb, 83, who for the past six years has made his home with his sister, Mrs. Minnie (Mary Julia) Wade, died last week, Thursday after an illness of only four days with pneumonia.

Mr. Holcomb was born april 13, 1851 and was on of a family of 13 children, of whom only one, Mrs. Wade, is now living. He lived in Clemons, N.Y., from which place he came here. He had always had good health and each day until his last illness was seen about town. Many happy hours were spent at Williams' Brothers' mill.

He is survived by one son, Lewis Holcomb, of Clemons, N.Y.

The funeral was hald Saturday at the house and the body was placed in the vault until spring when it will be buried in the family lot in Clemonns, N.Y.

b. circa 1857
Oliver Holcombe was born circa 1857 at NY.1 He was the son of Levi Holcombe and Susanne Jane Wiley.1

b. circa 1847
Olive Holcombe was born circa 1847 at NY.1 She was the daughter of Levi Holcombe and Susanne Jane Wiley.1

Simon and Theodosia were enumerated in the 1880 Ft. Ann, Washington Co., NY, federal census. He was a farm laborer, age 31, born in VT; she was 28. Children in the household were George 7 born in VT, and Ernest 5, born in NY.

Theodocia was enumerated in the 1920 Kingsbury, Washington Co., NY, federal census. She was a widow, age 68; son Louis, age 28 was listed as the head of the household.

Rollie and Francis were enumerated in the 1930 Fowler, Maricopa Co., AZ, federal census. He was a laborer on a truck farm, age 32, she was 28. Children in the household were Leona 8, Russell 6, Mary A. 4 years 11 months, and Dorothy 2 years 1 month. Sister Minnie Ragan was next door.

Rollie and Francis were enumerated in the 1940 Edmond, Oklahoma Co. Oklahoma, federal census. He was a WPR laborer age 40, she was 36. Children in the household were Russell 16, Mary Allice 14, Dorothy Fay 12, Wanda May 8, Freddie James 4, and Rollie LeRoy 6 months.

Four persons were killed and two others were critically injured in a two-car collision a mile north of Fort Cobb on Highway 9 late last Friday afternoon.
Critically injured in the collision were Rondia Goodner, two-year-old daughter of one of the women wreck victims, and the girl's father, Harold Loyd Goodner, 25, Altus AF Base.
Killed in the accident were Rollie Eugene Farrow, 63-year-old Fort Cobb farmer, his wife, Mrs. Frances Farrow, 57; Mrs. Dora Linda Goodner, 20, of Altus and her 8-month-old son, Harold Wayne Goodner.
Funeral services for Mr. and Mrs. Farrow were held at 2 p.m. Monday at the Fort Cobb Baptist church. Burial was at the Oak Grove cemetery, near Fort Cobb.
The Goodner child that survived the wreck remains in a critical condition in an Oklahoma City hospital, where she underwent surgery Saturday for head injuries, and the baby's father was reported "improved at Tinker Field hospital,
Oklahoma City.
Filmore Edgemon, Anadarko highway patrolman, investigated the accident, which occurred about 6:15 p.m. at a point where Highway 9 curves west a mile north of Fort Cobb. The accident occurred as the car occupied by the Farrows neared the west end of the curve. The Goodner car, driven by the husband and father of the two children, was traveling east.
The two cars hit head-on knocking the Farrow car back 43 feet in a southeasterly direction from the point of collision, and the Goodner car bounced 26 feet from the point of contact. Both cars came to a halt facing opposite
their original direction of travel.
The patrolman reported that he was informed the Goodner family which had been stationed at the Altus AFB for several months, was enroute to Anadarko to attend the Altus-Anadarko football game Friday night.
The Farrows are survived by his mother, Mrs. Alice Farrow of Binger, four sons, Russell, Leroy and Larry of Fort Cobb, and Fred of Fort Sill; five daughters, Mrs. Marie Sommer, Peoria, Ill., Mrs. Mary Alice Kimbro, Fort Worth,
Mrs. Joyce Owens, Oklahoma City; Mrs. Dorothy McAfee, Dakota City, Nebr., and Mrs. Wanda Callaway, Fort Worth. He is survived by three brothers, Arthur and Andy of Binger, and Marvin L. Farrow, Garland, Tex; one sister, Mrs. Minnie
Anderson of Binger.
Mrs. Farrow is survived by a half-brother, Burch Clark of Concordia, Kan., and one sister, Mrs. Grace Rodio, also of Concordia.
Farrow was born March 23, 1898, at Amboy, Ill., and Mrs. Farrow, whose maiden name was Frances Maude White, was born July 18, 1903, in Concordia. They were married in September, 1919 at Clay Center, Kan. He was buried at Ft. Cobb, Caddo Co., OK.4,2 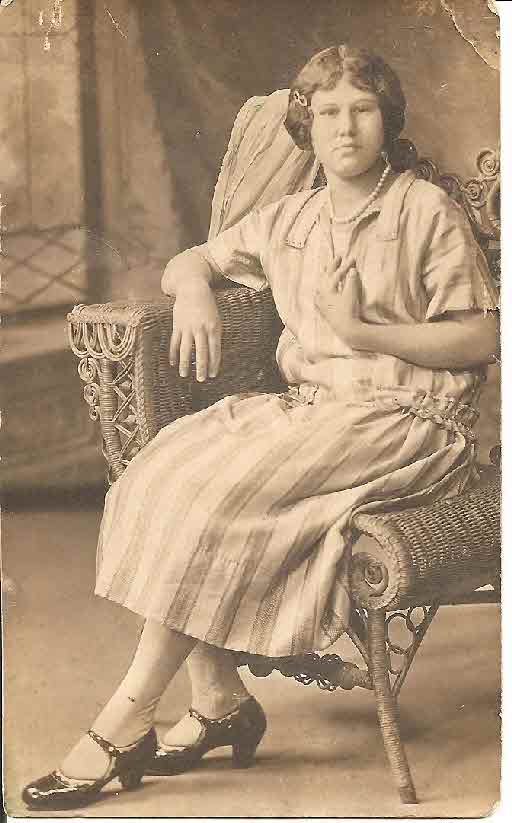 b. September 1898
Hazel M. Shaw was born in September 1898 at IL.1 She was the daughter of Charles DeForest Shaw and Laura Molinda Holcombe.1

Earl and Viola were enumerated in the 1930 La Moille, Bureau Co., IL, federal census. He was a delivery man 28, she was 26. Others in the household were stepson Arthur Perrine age 6, father Otis Holcomb age 59, and a boarder.

Earl and Viola were again in LaMoille in the 1940 federal census. He was a section hand age 38, she was 35. the only child in the household was Arthur Perrine 17. Father Otis Holcomb age 68 was also in the household.