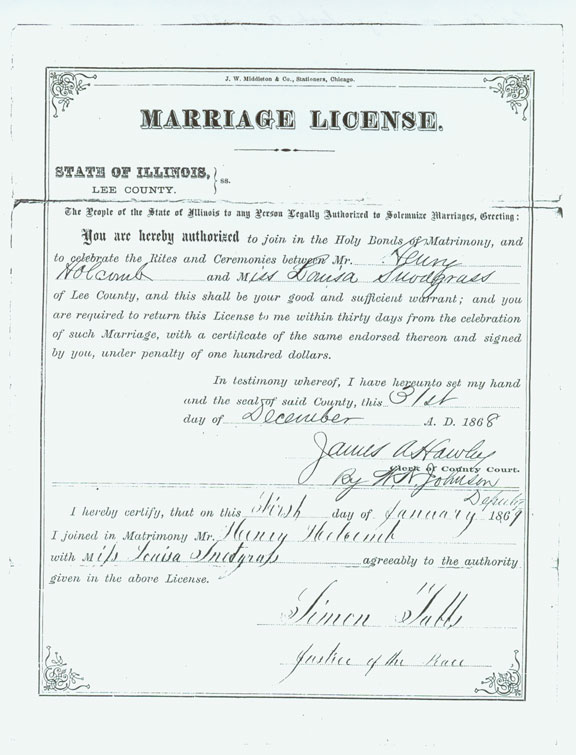 Based on the frequently unreliable information from census records it appears that Henry and Louisa each had a child prior to their marriage and then produced four children of their own. The census records of 1910 indicate that they were married circa 1867, which would be after the births of Charles and Frances.


Henry and Louisa were enumerated in the 1870 Amboy, Lee Co., IL, federal census. He was a farmer, age 35, born in NY; she was 27, born in WI. Two children were enumerated Emma 3, and Melissa 1, both born in IL. Also enumerated was Francis Snodgrass, 9.


Henry and Louisa were enumerated in the 1900 Amboy Twp., Lee Co., IL, federal census, next door to nephew Linus Holcomb. Henry was born in NY in Dec 1834, and wife Louisa in Feb 1844. There were no children enumerated, but Louisa had 5 children, all still living.


Henry was enumerated in the 1910 Amboy Twp., Lee Co., IL, federal census. He was 75; wife Louisa was 65. Henry had been married twice, they had been married 42 years. Louise had 5 children, 4 of whom were still living.

from an obituary in an unknown, undated newspaper:

Henry Holcomb, or better known by the children and many friends of this city, as Grandpa Holcomb, passed away at 11:13 o'clock Monday morning at the home of his daughter, Mrs. Perry Hastings, 607 East Sixth Street. His demise was due to dropsy of which he has been a sufferer for several years. Mr. Holcomb was born Dec. 15, 1834 in White Hall, New York. In the year 1864 he moved to Amboy, Ill., where he was engaged in farming for a number of years. For the past few years he has made his home with his daughter, Mrs. Hastings.

The funeral services will be held Wednesday afternoon at 2 o'clock at the home of Mrs. Hastings.

Charles and his family removed to Shelburne, Lee Co., Ill.3

b. circa 1813
Levi Holcombe was born circa 1813 at NY. He was the son of James Holcombe and Olive Noble.1 Levi Holcombe married Susanne Jane Wiley circa 1838.2


Levi Holcomb was enumerated in the 1860 Whitehall, Washington Co., NY, federal census. He was one page and 12 households from Linus Noble Holcomb. It will be assumed that he is the brother of Linus and the family found in that census will be listed here. This Levi had children named Linus and Esther, the same as his siblings.


Levi was enumerated in the 1880 Whitehall, Washington Co., NY, federal census. He was a farmer, age 66, widowed, living in the household of Nathan James Beckwith.

The 1855 Whitehall, Washington Co., NY State census shows Linus and Esther in the household of Andijohn Gillett. Theodocia is 4, Andijohn is 1.


There is a possibility of another child, an earlier Linus N. Holcombe Jr. who was born 9 March 1856; who must have died before the like named brother born in 1865.


Linus and Lucinda were enumerated in the 1860 Whitehall, Washington Co., NY federal census, page 24, household 190. He was a carpenter age 56, she was 55. Children in the household were Thedocia 7, Theodore 6, and Esther, 1. The census indicates that Lucinda and the three children were all born in Canada.


O C Jillett and husband Phylarnur were enumerated in the 1855 Granville, Washington Co., NY State census in the household of her father James Hocum.


Cordelia was enumerated in the 1880 Whitehall, Washington Co., NY, federal census in the household of Munroe Chadwick. She was married age 56, but no husband was enumerated.