Earl was an insurance broker, farmer and fertilizer dealer, a Baptist, and a Democrat. A veteran of World War I, he served on the County Board of Education and was a state representative in his first term when he died at age 59. 3 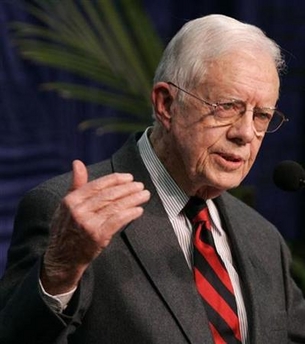 Jimmy Carter worked on his father's farm but he had an uncle in the United States Navy who sent him postcards from exotic ports, so as a boy he dreamed of attending the Naval Academy. He was the first in his family to attend college, first in 1941 at Georgia Southwestern for a year then Georgia Tech for a year. He then went to Annapolis, graduated 60th in his class in 1946.

He worked in nuclear submarines but resigned his commission in 1953 when his father was diagnosed with cancer to run the peanut farm.

Carter won his first elective office in 1960, became governor of Georgia in 1971, and the 39th president of the United States in 1977.

Jimmy and Rosalynn grew up near each other in Plains, but they didn't become an item until he came home on summer break from the Naval Academy in 1945.

At 18, Rosalynn Smith already had a crush on her future husband. She visited the Carter home often to see her best friend, Jimmy's sister Ruth, and admired a photo of him in his Annapolis uniform. But the midshipman was seeing someone else — Miss Georgia Southwestern College, no less.

"I had never even thought of asking Rosalynn out on a date," he says.

Carter's steady was busy on the last night of his summer break, so he asked Rosalynn Smith out to a movie. The next morning, he told his mother that he had met the girl he was going to marry.

The ceremony took place the following summer at Plains Methodist Church. As the couple drove up together, the pianist was playing "Here Comes the Bride" for the second time and they had to run up the steps.

After the service, the newlyweds borrowed his father's new car — a 1946 Plymouth — and drove to Atlanta, where they spent their first night as man and wife in the Biltmore Hotel. The next morning, pulling out for Chimney Rock, N.C., Carter promptly crashed into another auto, demolishing it but barely scratching his daddy's Plymouth. 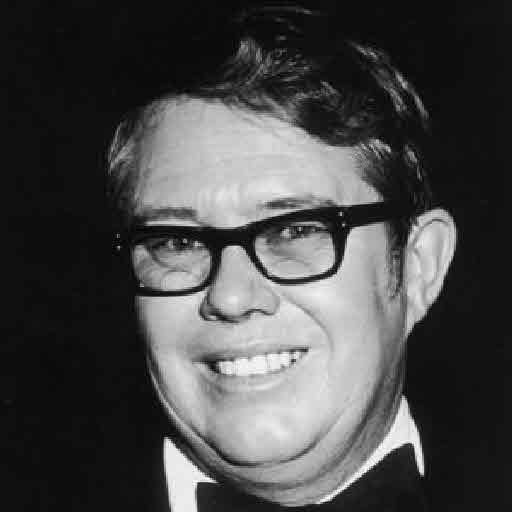 From the Daily News of Los Angeles of 26 September 1988, viewed online at Genealogybank.com, accessed 18 October 2017:

Billy Carter, the irrepressible gas station proprietor and farmer who vaulted to national celebrity in his brother Jimmy's successful campaign for president in 1976, died of cancer of the pancreas Sunday morning at his home in Plains, Ga. He was 51.

A statement issued by the family said Carter, whose condition was diagnosed a year ago as being inoperable, died "quietly and peacefully in his sleep at 7 a.m." with members of his family at his bedside.

Carter, who took charge of the family peanut warehouse and farm in Plains when his brother ran for president, proved incapable of handling his sudden fame after his older brother's election and became the subject of repeated investigations by the Internal Revenue Service and other government agencies.

The most highly publicized was a federal inquiry into his ties to Libya, which provided what he said was a $220,000 loan. Carter, who visited Libya in 1978 and 1979, had a brokerage arrangement with an American company that was seeking an allotment of Libyan oil. At the time, Libya was trying to obtain American transport planes. Carter was a registered agent for the radical Libyan regime, but he insisted that he never sought to intercede on its behalf in Washington.

A Senate committee ultimately found no evidence that Carter had influenced American policy. But it said in its report, a month before the 1980 presidential election, that President Carter had been negligent in not dissociating himself from Billy's unorthodox activities.

"I do not deny I brought most of my notoriety on myself, nor do I apologize for it," Carter told the Senate investigators earlier. "I refused to conform to an image that a lot of people thought a president's brother should adopt. I considered myself to be a private individual who had not been elected to public office and resented the attention of different government agencies that I began to hear from almost as soon as Jimmy was sworn in."

He also felt compelled that day to declare that he was not "a buffoon, a boob, or a wacko." Those were some of the terms about him that appeared in the press, which, depending on the occasion, he both courted and denounced.

His more conventional business ventures were mostly unsuccessful, including the short-lived Billy Beer that he had no hand in brewing but that he promoted with gusto. He also had no success in operating the family peanut warehouse and farm.

These businesses could not be managed properly while in a blind trust, Carter later maintained, and the town was so besieged by tourists that "it became impossible to carry on normal business in the office."

Without the job at the warehouse, Carter had nothing to do "except drink beer and go around making a fool of himself," a friend said. By March 1979, Carter was persuaded to enter treatment for alcohol abuse at the Long Beach Naval Hospital, in California.

In 1981, financially beleaguered, Carter was forced to sell much of his

Plains property, including the gas station at which he once played the clown prince on a throne of beer cases. The money went to pay off $70,000 in federal tax arrears and about $30,000 due to local bankers who had threatened to foreclose on his home.

from speaking engagements and personal appearances, which reportedly brought him more than $100,000 a year. The agency refused to accept his complaint that his records had been seized for use in various federal investigations and were therefore unavailable to him.

"They tried to make an example of me, to embarrass me," he said of his tax pursuers. "But nothing embarrasses me." Carter had previously repaid $1,000 of the Libyan loan, the balance of which is believed to have gone unsatisfied.

Carter, whose full name was William Alton Carter III, was born in Plains on March 29, 1937, and, except for a stint in the Marine Corps, lived there until April 1977, when he moved about 20 miles to Buena Vista to escape the crowds that had begun to engulf his hometown.

Carter's sister, Ruth Carter Stapleton, and his father, James Earl Carter, both died of pancreatic cancer and the disease also contributed to the death of his mother in 1983.

Besides his wife, he is survived by four daughters, Kim Fuller and Jana and Mandy Carter, all of Plains, and Marle Usry of Charlotte, N.C; two sons, William IV, of Franklin, Tenn., and Earl, of Plains; his brother, Jimmy; a sister, Gloria Carter Spann, of Plains; and four grandchildren.

The blinding spotlights of national news media often hid the warmth of Good 'ol Southern men like Billy as his son Buddy expressed in his 1999 biography of his dad. He wrote about how close he was to his Dad and the wonderful times he had as he witnessed some of Billy's antics. But one of the most telling things Buddy wrote about was an attitude that the Carte's learned, probably at Lillian's knee that made them different than a lot of their neighbors; that gave Jimmy a special platform to stand on in his path to governor and president.

Dr. Harris notes that the birthdate, often repeated of 1698, is disputed by the available record of his gravestone inscription in Marvin Graveyard at Lyme. He died "Oct. 4, 1754, in this 50th year," which would make his birth about 1705, unless the "0" on the weathered stone was a "6" which case he would have been born about 1699.

Further information is apparently available in The New York Genealogical and Biographical Record, 84 (1953):140-141, which had corrections published elsewhere.

b. 9 March 1799
Mary Colt was born on 9 March 1799.1 She was the daughter of Dr. Amherst Colt and Miriam Giddings II. Mary Colt married Samuel Colby.1

b. 9 March 1799
Lydia Colt was born on 9 March 1799.1 She was the daughter of Dr. Amherst Colt and Miriam Giddings II. Lydia Colt married Zacheus Colby.1

Dr. Gale Harris notes that John, Jr., was born about 1661 based on his gravestone in Duck River Cemetery at Old Lyme, Ct., (NEHGR 77[1923]:198. The place of birth is not known, but is probably Hartford, CT, where both his parents were living about a year before.

Loomis lists 3 daughters without knowing their names or birthdates. Loomis does not list John, III, but Dr. Harris notes his will. Dr. Harris also notes that Homer Brainard presented a list of John Jr's children in TAG 14(1938):172-73 but the article is full of errors. There are certainly more children.

b. 1730
Sarah Colt was born in 1730. She was the daughter of Deacon Benjamin Colt and Miriam Harris.

b. 1740
James Denison Colt was born in 1740 at Lyme, New London Co., CT. He was the son of Deacon Benjamin Colt and Miriam Harris.

There is a lot of confusion on John Sr.'s wives. Gale Ion Harris has written two articles that cover John Edwards and Joseph Fitch. These two articles, one in TAG, the other in NEHGR, seemingly unrelated, together give a very detailed, documented picture of John Colt Sr. and Jr. In particular, the NEHGR article gives considerable detail under the listing for Hester. There are also additions and corrections in NEHGR Vol 150, April 1996, pages 215-216.


Dr. Harris also notes in a letter that a lot of information on the Colts was fiction created to please Colt descendants. Statements that he arrived in 1638 are based on Royal R. Hinman's inventions in the mid-19th century and somehow on a misunderstanding of the record of the baptism in Hartford on 7 Feb. 1646/7 of Sarah, daughter of John Cole of Farmington. By some carelessness this record was misinterpreted to be for a daughter of John Colt. John Colt never had a daughter Sarah. The subsequent history of John Cole's daughter Sarah is known and there is no possibility that John Colt was her father.

Dr. Harris also cites the Great Migration Newsletter, 7 [Jan.-March 1998], 8, in demonstrating the error in assuming that John Colt arrived in new England on the Griffin in September 1633. John Colt, Sr.'s, origins and parentage are unknown (TAG 68:7 or NEHGR 150:215). He also had no third wife as was speculated.

The earliest record of John Colt Sr. is 5 June 1656 when he is found in a card game with some companions at Hartford. No specific record of his age survives.

Glel Ion Harris wrote a third article on John, a "Review and Reconciliation" in TAG 80:2.

Daniel Hayes was taken prisoner by the Indians in 1707/08, carried to Canada, and kept in captivity at least five years. He earned his own ransom, for which he was reimbursed by Ct. Martha Buel Holcomb witnessed Daniels' capture far from her home as she was walking to get cows at the bottom of a far hill.

Daniel lived in Salmon Brook Village, CT. Phelps' History of Simsbury Hartford, written in 1845 details his captivity. Charles W. Hayes, in A Long Journey 1876, states "He built in 1720 the house occupied by him and his descendants for four generations on the east side of Salmon Brook Street, in the lower or southern part of the village. The members of the first Congregational Society met in this house from 1739 until 1743. He is buried in the Old Salmon Brook Cemetery. Charles W. Hayes, copied his gravestone: 'Here lies ye Body of Mr Daniel Hays who Served his Generation in a Steady Course of Probity and Piety and was a Lover of Peace and God's Public Worship and being satisfied with Long Life left this World with a Comfortable hope of Life Eternal Sept 23 1756 In ye 71 year of his age.' "

McCracken notes he was a blacksmith, scythe-maker, innholder and prominent citizen of both Branford and New Haven, CT. He was second child to bear this name. His reason for moving from Simsbury to Branford is not apparent.