Harry R. Cook was the son of Charles Cooke and Emma Lucy Holcombe.

Grace Cook was the daughter of Charles Cooke and Emma Lucy Holcombe.

From the Chicago Tribune:

For Frederick Holcombe, architecture was a balance between creativity and practicality, and he used those principles as the corporate architect for J.C. Penney Co. and Hart Schaffner & Marx.

"Clearly his focus was on retail for many years and . . . what he enjoyed was the whole idea that you could design something and then see it," said his son James. "He liked tangible results. He would visit the stores and pick out the fixtures and watch them physically being constructed into something that your get to see in use."

He was very flexible with his ideas," said Albert Miripol, a former architect with Carson, Pirie, Scott and co. when Mr. Holcombe was corporate architect for Hart Schaffner & Marx. "Many of the stores he designed were when (the company) was a big force in the clothing business, and they had all these big stores across the country. He was very well liked and very talented."

Mr. Holcombe was born in Rochester, N.Y., and raised in Avon, N.Y. His family lost their knitting mill business during the Depression but opened a confectionery and tobacco business, where Mr. Holcombe worked.

He attended Syracuse University but was drafted in 1943 into the Army during World War II. He served as a staff sergeant in the Pacific theater.

Upon his discharge in 1946, he resumed his education, graduated with an architecture degree and became certified. He married his first wife, Mary Elizabeth Green, in 1951.

He started his career with Victor Gruen in Detroit. However, he wanted his young family to live overseas, so he became a private contractor for the Air Force in Germany. There he designed buildings at several bases.

The family stayed in Germany from 1956 to 1961, when they returned to the States and moved to Connecticut. For the next four years, he worked for J.C. Penney, designing retail stores. In 1967 he was hired by Hart Schaffner & Marx as a corporate architect.

He and his wife divorced in 1969. In 1975 he married his wife, Sue, and the couple lived in Chicago until 1980. Mr. Holcombe was then hired by the engineering firm Ralph M. Parsons and Co. to help plan, design and oversee construction of a new city, Yanbu, Saudi Arabia.

"The plan was to build a city on the Red Sea so oil could be exported out the Red Sea," said his daughter Shelby Boblick. "He was literally building a city near the Red Sea."

He moved to Fontana, Wis., near Lake Geneva, and shifted his focus to freelance work and residential architecture.

Mr. Holcombe was a member of the American Institute of Architects.

In addition to his wife, son and daughter, other survivors include another daughter, Amy Dolce; another son, Christopher; 12 grandchildren; and a great-grandson.

Services have been held.

Alonzo and Sarah were enumerated in the 1880 Granby, Hartford Co., CT, census with Bertha and Robert. Servant Fannie Jones, black, age 31, and her mulatto child Flora were also recorded in the household.

Robert appears in the 1900 census of Granby on page 7A, line 5, with Julia and his father, Alonzo. Julia and Robert had been married 6 years and had no children.

Robert and Lizzabeth were enumerated in the 1910 Granby, Hartford Co., CT, federal census. He was a farmer, age 39, she was 22. Children in the household were Elliot 2, and Ralph 1. Also in the household was Alonzo 77, and Warren Drake, brother-in-law, age 20.

Robert and Carrie E. were enumerated in the 1930 East Granby, Hartford Co., CT, federal census, district 112. He was a teamster on a tobacco farm, age 58, she was 42. The only child in the household was Ralph B. age 21, working as a laborer on a tobacco farm. They were again in East Granby in the 1940 census. Robert was a teamster and Ralph was a die caster at a steel mill.

Children of Robert B. Holcombe and Elizabeth Drake

Children of Elizabeth Drake and Robert B. Holcombe 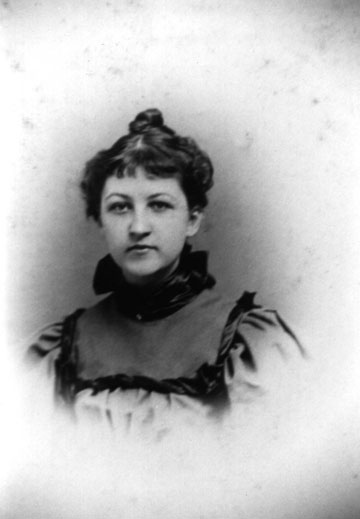 Charles and Mattie are recorded in the 1900 Granby census, page 7B, line 92, in the household of her parents.

Charles and Mattie appear in the 1900 Granby census, page 7B, line 93, living with Mattie's parents. They had been married three years and had had no children.

Ann Skinner was born in 1639.2 She was the daughter of John Skinner and Mary Loomis.

Janet enlisted on 20 November 1942 in the Womens Army Corps as an aviation cadet. She served as a 2nd Lt. of WAAC in WW II. Her civil occupation was "physician and dentists assistants and attendants."