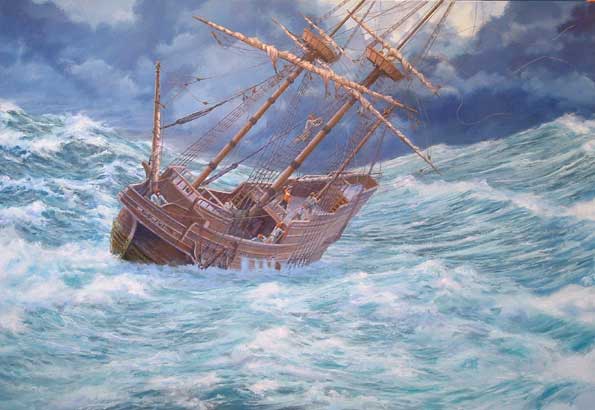 All Thomas' children were baptized and/or buried in Watford. He brought his wife and family to Leiden, Holland, where he became a citizen of Leiden on 25 June 1618, where he is called a camlet merchant.

On 1 April 1620, he sold his house on Barbarasteeg for 300 guilders, apparently in preparation for his voyage on the Mayflower. He came on the Mayflower with eldest son Joseph, leaving behind in Leiden his son John, daughters Elizabeth and Margaret, and wife Alice.

Thomas Rogers died the first winter at Plymouth, leaving behind his 18-year old son Joseph. His wife and children that were left behind in Leiden are found in the 1622 poll tax of Leiden, and were termed "poor people" and "without means". Children Elizabeth and Margaret apparently came to New England later, but where they lived or who they married with remain unknown. Son John came to Plymouth about 1630.

Child of George Cosford and Margaret (?)

Child of Margaret (?) and George Cosford

Child of William Rogers and Eleanor (?)

Child of Eleanor (?) and William Rogers

b. 1638
Mercy Southworth was born in 1638 at Duxbury, Plymouth Co., MA.1 She was the daughter of Constant Southworth and Elizabeth Collier.1 Mercy Southworth married Samuel Freeman on 12 May 1658 at Eastham, Barnstable Co., MA.1

John Boynton was enumerated in the 1880 Eureka KS federal census, age 21, born in Canada, living a few doors from Laura.

WI Holcombe was the son of US Holcombe. 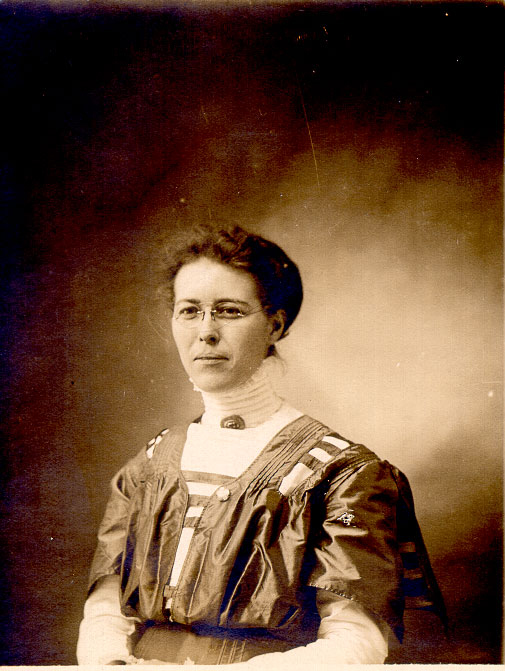 These photos were purchased off eBay. The only notation on any was on the picture of her "Miss Lulu Holcomb, Mazomanie Wisc Aug. 29, 1910"

Lulu Irene Holcomb, daughter of David and Ann Holcomb, was born January 30,1880 in Arena Township and departed this life April 22,1938, at the age of 58 years.

She was one of eleven children, seven boys and three girls, all but three having preceeded her in death. She lived with her parents on the old home place and attended school in Dover. After the death of her parents she continued in the old home with her brother, Worcester, until his death nine years ago.

About eight years ago she suffered a stroke, from which she never fully recovered. She lived with her sister, Mrs. Nettie Coutts, in Minneapolis for some tine after her affliction. Five years ago this spring, after her brother George retired, she came back to the old home, where they spent four happy years together. Since his death last year she has made her home with her brother, Willis, in Mazomanie.

She leaves to mourn two brothers, Willis and Frank, of Mazomanie and one sister, Mrs. Nettie Coutts of Minneapolis, and many friends and neigbors.

b. September 1662
Sarah Griswold was born in September 1662 at Wethersfield, Hartford Co., CT.1 She was the daughter of Michael Griswold and Ann (?)1 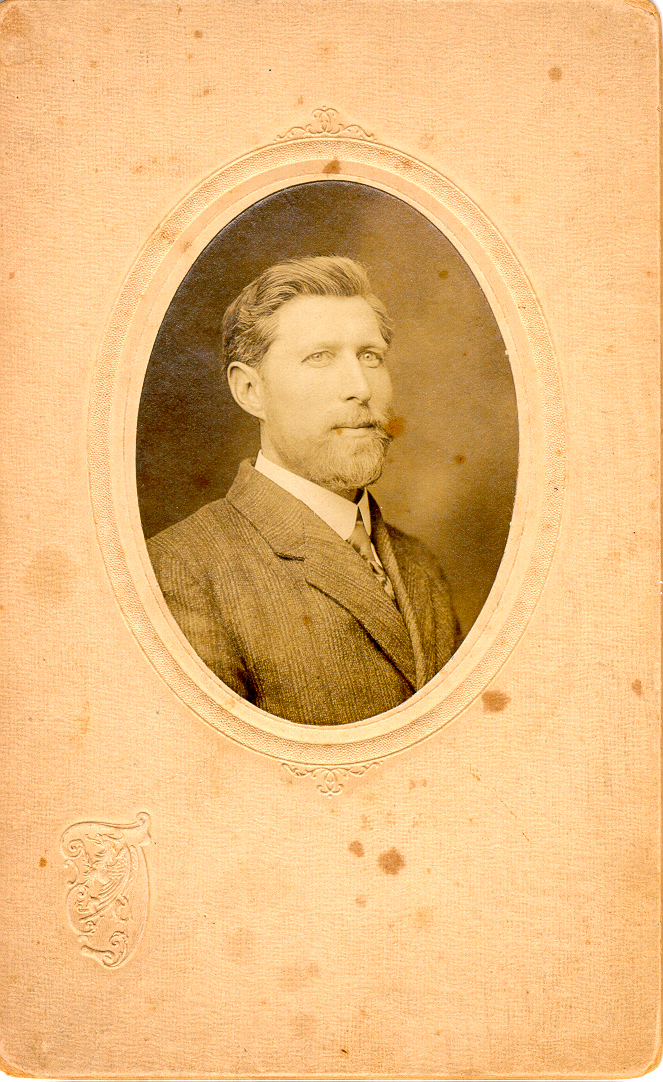 W. B. Holcombe was the son of NY Holcombe.

This photograph was obtained from eBay and was originally from an estate in central NY. 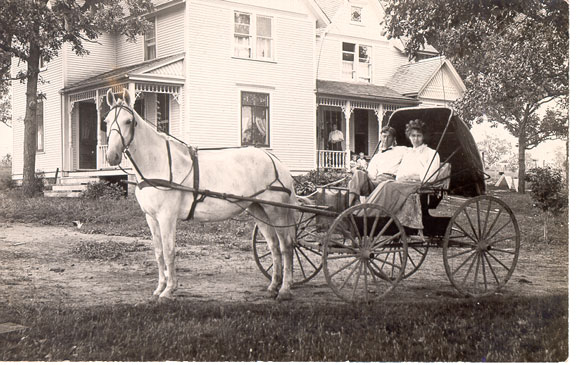 The Frank and Jennie of Mazomanie are assigned to this family only on the basis of there being a Frank(lin) in the David Holcombe family and that this Frank was in Mazomanie.


Frank and Jennie were enumerated in the 1930 Mazomanie, Dane Co., WI, federal census, ED 55. He was a bridge carpenter for the railroad, age 56, she was 46. The only child in the household was Gayle, 11.


Harold Brown Holcomb, second son of Mr. and Mrs. Willis Holcomb passed away on sunday afternoon, May 30, 1915, at the age fo fifteen. He was born May 20, 1900, in the township of Mazomanie and was about to finish the 8th grade when he was obliged to leave school on account of ill health. This was not easy for him, as he greatly enjoyed his school work. Though he was unable to attend school, he constantly planned how he might make up his work and keep up with his class.


Besides many friends, he leaves his sorrowing parents, two brothers, Virgil and Garth, and his grandmother Brown and grandmother Holcomb. The funeral service was held at the home on tuesday afternoon at two o'clock. Rev. A. F. Daschler conducted the service, and used as his text Ecc. 12:1.

b. circa 1904
Garth Holcombe was born circa 1904 at WI.1 He was the son of Willis David Holcombe and Hattie May Brown.1

Child of Garth Holcombe and Hazel (?)

Worcester was enumerated in the 1830 Parish, Oswego Co., NY, federal census. There were 2 males under 5 in the household. There is a Chester Holcombe family also in Oswego Co., Mexico Twp., much older, could it be his father?


Worcester and Polly "Holkum" were enumerated in the 1860, Arena, Iowa Co., WI, federal census. He was a farmer, age 58, born in NY; she was 53. Children in the household were William 22, and Henry H. 19. Living next door was William "Holkum" age 25, relationship unknown.


Worcester and Polly were enumerated in the 1870 Arena, Iowa Co., WI, federal census. He was a farmer age 68, she was 62. Living next door was apparently son John.

Worcester Holcombe, a brother of John, and hi swife, Polly winters, lived for many years in Sec. 13. their sons, John, William, Worcester and Henry attended the round Prairie school in the fifties. Worcester, Jr. Served four years in the Civil War. Mary E. Holcomb (Mrs. S. B. Chatfield) who died in 1849, was a sister, whose sons were Norman and Levi. Lydia Holcombe, a sister, maried William McCarthy, moving with her family to Albion, Wis., in later life.

from the Mazomanie Sickle:

The remains of David Holcomb's mother arrived here on Wednesday evening. The funeral took place on Thursday at the residence. 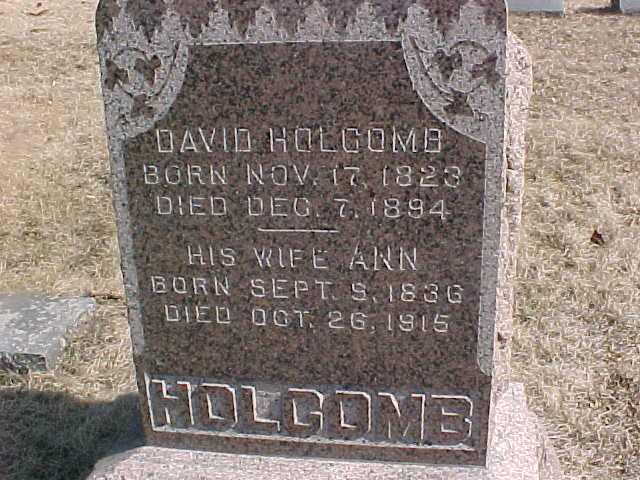 December 8, 1894
David Holcomb
Just as we go to press we learn that David Holcomb, of Dover, died at three o'clock Friday afternoon.

DAVID HOLCOMB
FARMER, Section 17; P.O. Mazomanie; born in Oswego County, N.Y. in 1822; he came to Wisconsin with his father's family in 1845; the family settled in Troy, Walworth, Co., they came to Iowa County in 1855, and settled where David now lives; father died in 1874; mother lives at the homestead; David took possession of the homestead in 1873.

He was married to Miss Annie Appleby; they have nine children---Worcester, John, Florence, George, Nettie, William, Franklin, Ernest and Lulu.

Mr. Holcomb's parents had eight children, six sons and two daughters; three Sons and one daughter are living, all residents of Wisconsin.


from the Mazomanie Sickle:
Ann Appleby was born at Utica, NY, September 9, 1836, and passed away, apparently without struggle or pain, on Tuesday afternoon, Oct 26, 1915, aged seventy-nine years, one month and eighteen days. At the age of about eight years she came with her parents from the state of her birth to Wisconsin, and in 1853, was married to David Holcomb. Eleven children blessed their home, seven boys and four girls. Two, one boy and one girl, died in infancy. Those remaining are: Worcester James of Arena township, John Edward, of Verdon, SD, Mrs. Geo. T. Blake of Mellette, SD, George Henry of Washington DC, Mrs. Nettie E. Coutts, of Mellette, SD, Willis D. of Mazomanie township, Frank C., of Mazomanie, Ernest W., of Minneapolis, Minn., and Miss Lulu L. of Mazomanie township.


Mr. Holcomb passed away December 7th 1894. Mrs. Holcomb was a woman of cheerful disposition, of constant activity, kind and patient. She was a companion to her children, and as a neighbor much beloved. She enjoyed the best of health until about two years ago, when she was greatly injured by a fall. Since that time she was confined more or less to her home. But though her health was thus impaired, and her activities necessarily limited, there were no signs of mental decay or mental inactivity. One of her chief activities of late years was the increased correspondence that she carried on with her children. The funeral service was held at the old home on Friday afternoon, Oct. 29th, where she had spent the largest part of her life, and from which the sons and daughters went out to positions of usefulness in the world. Rev. A. F. Daschler conducted the service. The six sons acted as pall-bearers, and the remains were laid at rest in the Mazomanie cemetery.

Daniel was a private in Company G of the 11th Regiment of the Wisconsin Infantry Volunteers. He enlisted on the 31st day of August 1861 at Iowa Co., WI, for three years. He mustered on the 10th day of October 1861 at Madison, Dane Co., WI. He mustered out on the 29th of April, 1865 at Prairie du Chien, WI. When he enlisted he was 35, married, with blue eyes, brown hair, a fair complexion, was 5 feet 6 1/2 inches in height, and by occupation a broom maker.

b. circa 1835
William Henry Holcombe was born circa 1835 at NY.1 He was the son of Worcester Holcombe and Mary Winters.1

Worcester enlisted on 13 Aug 1862 as a private in the 23rd Wisconsin Infantry, Company R. His residence was shown as Mazomanie.

Enumerated on the same 1870 census page as Worcester so the relationship is assumed.


Henry and Maggie were enumerated in the 1870 Arena, Iowa Co., WI, federal census. He was a broom maker age 29, born in NY; she was 19. There were no children in the household.


Henry and Maggie were enumerated in the 1880 Arena, Iowa Co., WI, federal census. He was a laborer age 39, she was 29. Children in the household were Clare 7, and Wilfard 5.

Silas and Mary E. were enumerated in the 1850 Troy, Walworth Co., WI, federal census. He was a farmer, age 27, she was 19. There were no children in the household.