After William went to the Dahlonega Gold fields, his brother John Flavel went to the California Gold Rush.

William left Granby for the gold fields of Dahlonega, Lumpkin Co., GA where he married. The marriage is recorded in the Lumpkin county probate office in Book "A-1", pages 13-14 of marriage records.

Although it was assumed that William's son enlisted in the Confederacy, the records at the National Archives, film series M266, roll 437 indicate that he was discharged because of "feeble health and disability of old age being 59 years old." Which would indicate that it was the father, not the son, that enlisted in Wrights Legion (40th Regiment, Georogia Infantry, Company I), or that both enlisted.

There is no documentation to support who first discovered gold in Dahlonega but the most widely accepted claim to the discovery that started the Georgia gold rush is that of Benjamin Parks. In 1828 Parks found gold on property belonging to the Reverend Robert O"Barr, pastor of the Yellow Creek Baptist Chruch, of which Parks was a member. Benjamin asked the Reverend for a lease on the site. O'Barr, thinking the request a joke, laughed at the very suggestion that gold had been found on his property, but finally agree to a forty-year lease whereby he would be paid one-fourth of the gold mined on the property. Parks took on a partner, Joel Stephens, and together they returned to the spot where young Benjamin had first stumbled over the sparkling stone. They turned up a pan full of dirt and to their amazement found it speckled with gold. Parks later recalled, "it was more than my eyes could believe." O'Barr sold his property and it eventually passed into the hands of Senator John C. Calhoun of South Carolina, to whom Parks said he finally sold his lease for what the thought was a good price. According to Parks, Calhoun soon struck a rich vein and tool our 24,000 penny-weight in the first month.

Despite the popularityof the Parks legend and the various claims to "first" discoveries between 1826 and 1828, there is no documentary evidence of the discovery of gold in Georgia until August 1, 1829, when a notice appeared in a Milledgeville newspaper, the Georgia Journal. According to the Macon Telegraph, it was not " . . . until the winter of 1829 and 30, when the precious metals having been discovered in great abundance upn our Cherokee soil, great numbers of people from Georiga and other States rushed to the Territory in search of its treasures."

Of course during this time all of the area where gold was being mined was Cherokee land. The sudden influx of thousands of twenty-niners into the Cherokee Nation was known even at the time as the "Great Intrusion." Georgia was not to take possession of the area until June of 1830, and even then the Cherokees would retain title to their property until the state decided how to dispose of it. But his slight protection was practically worthless and when Indian-fighter Andrew Jackson was elected president in the fall of 1828 the fate of the Cherokees was sealed and the Indians were dirven from their land in the "Trail of Tears," and their land was distributed to white Georgians in a lottery in 1832.

On April 24, 1833, a cite in Lumpkin County was chosen as the county seat and became known as Dahlonega, a Cherokee word for gold, and it was there a year later that William and Sarah were married.

Children of William Pindar Holcombe and Sarah A. Elizabeth Graham

John moved from Vernon, Ohio, to Hannibal, MO, about 1849; went to Shasta Co., CA in the "Gold Rush of 1849", where he succeeded faily in gold "diggings". Becoming well pleased with the West, he returned to Hannibal by boat resolved to remove his family to California and after a year, in 1851, in Mo. to arrange for the move. An emigrant train was organized for overland trip in wagons. He was made its captain, with the duty to ride on horse each day ahead of the wagons to locate water, a site for the camp that night with best feeding spots for horses and oxen, leaving his 14 year old son, Grove Robert to manage the team transporting the family for every day of the trip of four months until its end in the fall of 1852, settling in Yuba Co., California. He co-operated with the US Military Escort provided for protection against Indian attacks enroute, "crossing the plains".

John died suddenly at his homestead in Yuba Co., from exhaustion in the heat while digging a well. His widow, Antoinette, and children Florence, Thaddeus and Katherine are recorded as a family in the 1870 cnesus of Oregon House, Yuba Co. He and his wife are buried at Indiana Ranch near Brownsville, Yuba Co., California, where gravestones inscribed to them stand.

Dryden Holcomb is said to have worked first as a carpenter when he settled in Vernon and to have traveled extensively, including a journey to Cuba. [4] He owned land in Trumbull Co., OH, at least as early as 1840, and may have arrived in the area some years before. An atlas assigns Dryden's name to property along what would become the Kinsman-Orangeville Road on an 1840 map. [10] Dryden and Laura's oldest son, Hiram D. Holcomb, born in July 1834, consistently reported his place of birth as Vernon Township, Trumbull Co., on his military service and pension records as did his younger brothers. [2] An 1830 map shows Norman Holcomb (note: son of Benajah5) as the owner of the land Dryden and Laura would later farm [10] -- land that is still being farmed today and that is about 1-3/4 miles north of the graveyard where Dryden and Laura are buried. [2] It appears a subsequent owner replaced the original farmhouse. [2]

Sometime after 1850, their near neighbors to the north were George W. and Jane Brackin Holcomb's family [10, 16, census], who had Vernon's first brick house built there. [15] The house still stands on the Kinsman-Orangeville Road. [Ohio Historic Building Survey, 2] (Note: The house is #7151). 4

[2] Personal visit to the grave site or other location discussed, Sept. 1999.

[15] From a newspaper retrospective on Trumbull County's pioneer days, part of a collection of articles in the library's vertical files on local history. (Note: I neglected to note the name of the paper or date of publication--will relocate it next trip.)

Children of Julia A. Holcombe and Silas Phelps II

Children of Silas Phelps II and Julia A. Holcombe

On the 1860 Vernon Twp., Trumbull Co., OH, census, Grove's occupation is given as shoemaker.

Jotham Holcombe was born on 23 November 1777 at Simsbury, Hartford Co., CT.5 He was the son of Benajah Holcombe and Hulda Post. Jotham Holcombe married Ruth Banning.

Jotham is enumerated in the 1850 Granby, Hartford Co., CT, census, age 72, as the head of the household, with Nathan and his family. 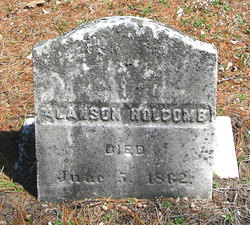 At the time of his marriage to Aurora, Alanson was listed as "of Ill."

It is apparently Aurora who is enumerated in the 1870 Granby, Hartford Co., CT, census, living alone, age 74.

Emeline Holcombe was the daughter of Alanson Holcombe and Minty Roby.

Caroline Holcombe was the daughter of Alanson Holcombe and Minty Roby.

Dwight Holcombe was the son of Alanson Holcombe and Minty Roby.

Probably the Dwight Holcombe, age 4, enumerated in the 1860 East Granby, Hartford Co., CT, federal census, in the household of a Caroline Franken(?).

Probably the Dwight Holcombe, age 13, enumerated in the 1870 East Granby, Hartford Co., CT, federal census in the household of Samuel A. Clark.

Probably the Dwight Holcombe enumerated in the 1880 East Granby, Hartford Co., CT, fedral census. He was a farm laborer, age 23.

Probably the Dwight Holcombe, age 43, enumerated in the 1900 Windsor Locks, Hartford Co., CT, federal census. He was a teamster age 43.

Louisa Holcombe was the daughter of Alanson Holcombe and Minty Roby.

Norman Holcombe was born on 15 November 1774 at Granby, Hartford Co., CT. He was the son of Benajah Holcombe and Hulda Post. Norman Holcombe married Olive Thompson in 1814. Norman Holcombe died on 16 November 1856 at Vernon, Trumbull Co., OH, at age 82. He was buried at Kinsman Cemetery New, Kinsman, Vernon Co., OH.2

Norman moved in 1808 to Vernon Twp. from Connecticut by ox team to occupy land bought from the Conn. Land Co., on which he established a farm and homestead.

Norman and Olive were enumerated in the 1850 Vernon, Trumbull Co., OH, federal census. He was a farmer age 68, she was 66. Children in the household were George 30, and Collins 23.

Topher Holcombe was the son of Benajah Holcombe and Hulda Post.

Flavel Holcombe was born in 1787. He was the son of Benajah Holcombe and Hulda Post.

Zopher Holcombe was the son of Benajah Holcombe and Hulda Post. Bowman lists this child, but Seaver and McCracken do not.

Rhoda Holcombe was born on 7 February 1743/44 at Simsbury, Hartford Co., CT.4 She was the daughter of Judah Holcombe and Hannah Buttolph.5 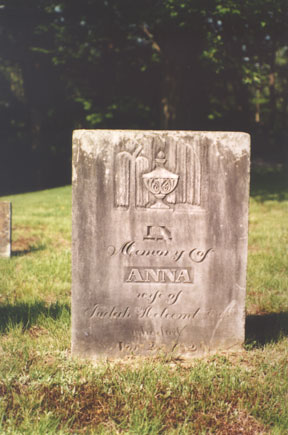