Rebecca Holcombe was the daughter of Reuben Wetmore Holcombe and Rebecca Niles.

Reubin W. and Martha were enumerated in the 1850 Huntington, Gallia Co. OH, federal census. He was a farmer agae 25, she was 24. Children in the household were Elizabeth 5, and Sarah 2.

Reubin and Matilda wre enumerated in the 1860 Huntington, Gallia Co., OH, federal census. He was a farmer age 35, she was 34. This is apparently a blended family. Children in the household were Elizabeth 16 and Sarah 12; then Isaac Bermas 9 and Elizabeth Bermas 5; then Mary E. Holcomb 4 months.

b. 1845
Victoria Holcombe was born in 1845. She was the daughter of Amos Niles Holcombe and Martha Wilds.

b. 1852
Moved to Montana. Coombs Holcombe was born in 1852. He was the son of Amos Niles Holcombe and Martha Wilds.

b. 1856
Reuben Holcombe was born in 1856. He was the son of Amos Niles Holcombe and Martha Wilds.

b. 1859
Amanda Holcombe was born in 1859. She was the daughter of Amos Niles Holcombe and Martha Wilds.

There is duplication of Asahels by the genealogists.

This report will continue the line under Ashel Esq. (1720-1817), but leave this entry to point out the possible error by McCracken.

Roswell grew up in the home of his grandfather, Asahel Holcomb; in 1803 moved to Hartland, Litchfield Co., Conn. with his father, Ahaz and brother, Moses; thence moved to Canaan, Conn., and from Litchfield Co., Conn. in the fall of 1818 to the heavily forested wilderness "back of the mountains, 6 miles west of Kingston and 8 miles west of Wilkes-Barre or "Dallas" and his children grew up at Truscksville (Westmoreland), all in Luzerne Co., PA. In that mountainous region all beasts of burden were oxen except an only horse brought by him. 4


Mary, riding horsseback from Kingston, Pa. to her home along narrow and dangerous paths was unable to urge her frightened horse forward as it had discovered a snake in the path, threatening the horse's advance. Mary tied her horse and advanced on foot to attack the snake with her riding whip with which she killed it and completed her trip. 4

McPherson indicates that Roswell and Poly had 10 children but only lists 7.

b. circa 1773
Elihu Holcombe was born circa 1773. He was the son of Ahas Holcombe and Hannah Stevens.

b. circa 1776
Samuel Holcombe was born circa 1776. He was the son of Ahas Holcombe and Hannah Stevens.

Lydia Holcombe was the daughter of Ahas Holcombe and Hannah Stevens.

b. 27 April 1744
McCracken and Seaver do not mention Luther. Bowman notes that Luther was not mentioned in the Simsbury Records. Luther Holcombe was born on 27 April 1744.2 He was the son of Deacon Asahel Holcombe and Thankful Kent.

Dr. Donald Barber in his book, page 157, identifies Ashbel, married Mary Ann Barber, but shows him as a son of Peter and Susan (Hoskins) Holcombe. 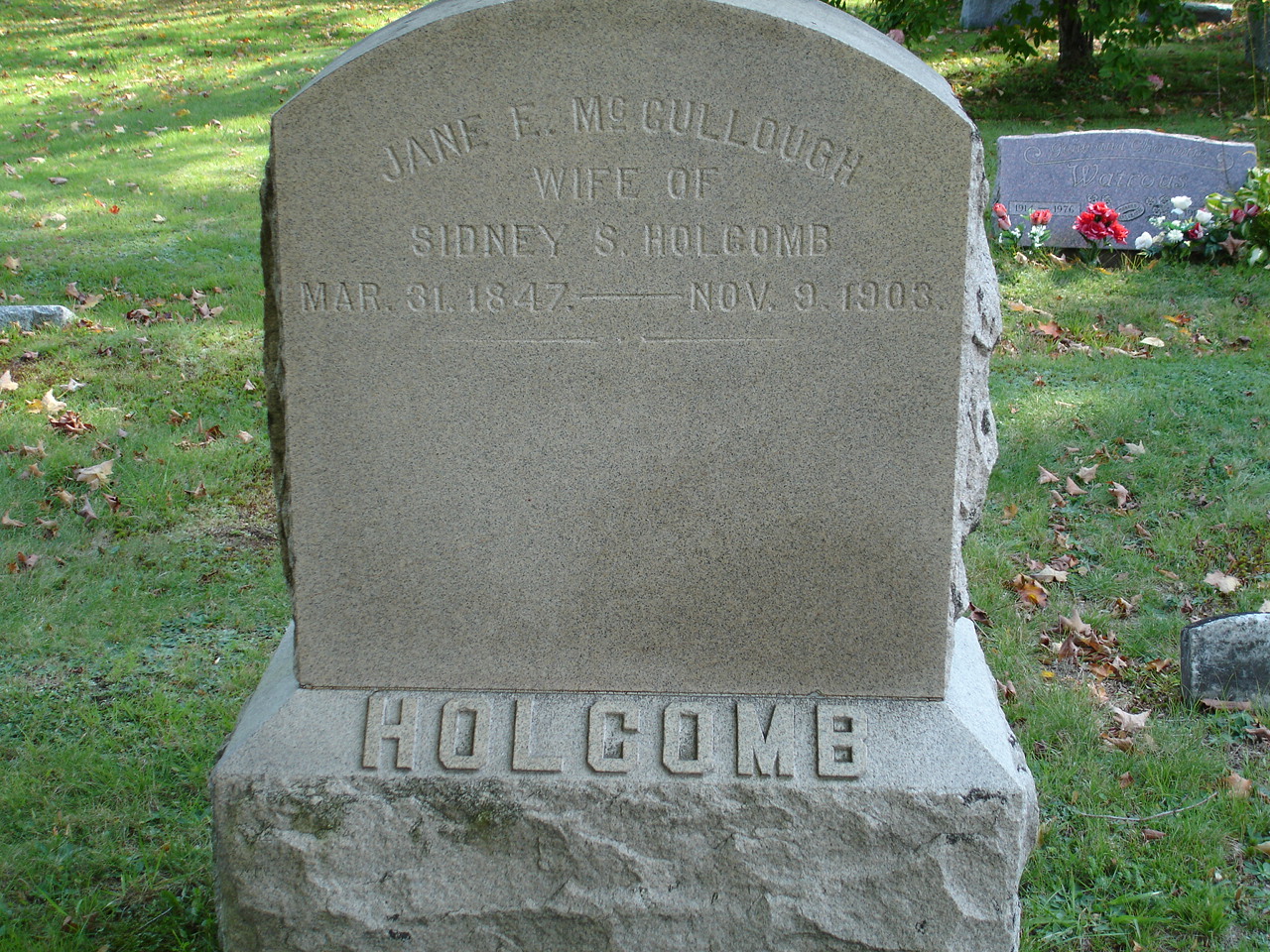 At Lilly Lake Monday, Nov. 9th at the home of her youngest daughter, Mrs. Ellen Ingraham, Mrs. Jane E. McCullough Holcomb of Tunnel [Broome Co., NY], passed from this to the higher and better life. The greater part of her life of fifty-five years had been spent within the borders of her childhood home; all except when she with her family tried a pioneer life in the state of Missouri. The privations and burdens associated with such a life bore heavily upon her. Reluctantly she bade her new formed associates good-bye and returned with her family to her relatives and friends in her old eastern home. Her life was not an exception to the common lot of humanity; it was intermingled with joys and sorrows. As her health gradually failed it seemed that her spiritual strength was renewed. She was enabled to look beyond this vale of tears where all crooked ways would be made straight. She is survived by two sons, Geo. and Edwin, and two daughters, Mrs. Mary Warner and Mrs. Ellen Ingraham. They can be happy in one thought, their doors were thrown wide open to receive their mother. When she was suddenly prostrated and it was feared that the end was near, they left their several places of business and were at her bedside ready to administer to every want. Besides her own family she leaves one brother, George McCullough, of Susquehanna, Pa., two sisters, Mrs. Henry Race, of Oxford, Mrs. Wm. Mead, of Greene, and three grandchildren. The last tribute of respect of all that was mortal of their mother, sister and friend was paid on the following Wednesday. The funeral was largely attended in the New Ohio church. Words of consolation, a worthy tribute to her memory, was given by the pastor of her girlhood and one who had known her all these years, Rev. Hammond. The floral contributions from her friends spoke words of love to comfort the afflicted family. Interment was made in New Ohio cemetery [Colesville, Broome Co., NY]. The bearers were her two sons and her two son-in-laws. [MHD notation: d. 1903]