Holcomb, a San Bernardino native descended from a city pioneer and a former mayor, served as mayor of San Bernardino from 1971 until 1985 and again from 1989 until 1993. In those 20 years, he established himself as an aggressive city booster and oversaw several major developments and milestones.

Holcomb started in politics as a water commissioner. In that position, rather than as mayor, he secured what is perhaps his greatest accomplishment: securing local water rights for San Bernardino.

Holcomb was a key campaigner for maintaining the local district's independence.

"He was the one-man army, general, lawyer, promoter for that," said former city council member Betty Dean Anderson, a longtime Holcomb supporter. "He is the one who saved San Bernardino from ... the city of Los Angeles."

At the time, the publisher of The Sun was in favor of the district merger, so Holcomb started his own weekly publication, Morris said.

"He created his own little weekly newspaper to tell the story of why we needed to keep our local water rights," he said. "Our ability to grow our economy locally, without concern about an adequate water supply, has been made possible by his tenacity and advocacy."

Former city council member Esther Estrada, who said she had some unpleasant run-ins with Holcomb in the mid-1970s, gave Holcomb credit for keeping water rights local.

"I think this valley will forever be indebted to Bob Holcomb for beating the L.A. water district when L.A. was trying to steal our water," Estrada said. "He was probably the most knowledgeable person on the issue of redevelopment and water that I've ever known. ... He was a rough and tough political opponent, but he knew a lot."

City leaders remember Holcomb as a relentless booster for the city.

"He was committed to the San Bernardino Valley and was committed completely to salvaging this as a first-rate town," Anderson said.

Morris, who said he has called on Holcomb for advice over the past five years, said Holcomb's "devotion to the city was never-ending."

Holcomb went to UC Berkeley and served for three years in the Army Air Corps during World War II.

As a co-pilot, he flew bombing missions from England to Germany.

Holcomb is survived by his wife, as well as three children: Terri Lee Holcomb-Halstead, William Holcomb and Robert Holcomb. Another son, Jay Holcomb, died in 1977.

The family has not yet made funeral arrangements. 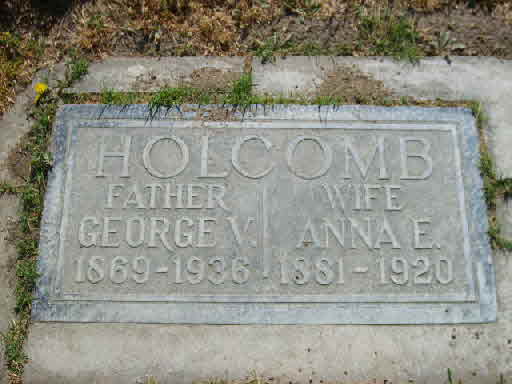 George and Sarah A. were enumerated in the 1900 Sn Bernardino, San Bernardino Co., CA, federal census near his father. He was a merchant age 30, she was 28. They had been married 13 years and had 3 children, all still living. Children in the household were Winfield 12, June 5, and Vernon 1. 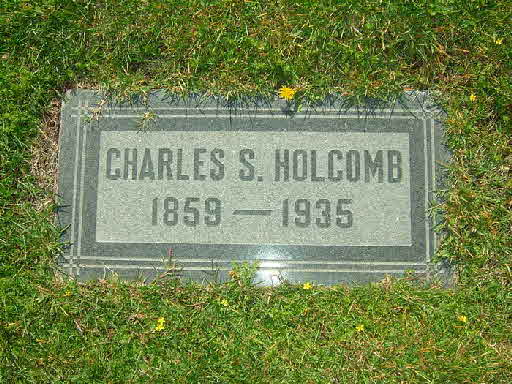 Charles S. is listed in some places as a son of William Francis Holcombe of San Bernardino, CA, however, the 1900 and 1910 census records of Riverside County, CA, indicate that his father was born in Scotland. In addition his listed birthdate is before the marriage of his parents.

However, with no explanation, Find A Grave lists him as Charles Stewart Dougall Holcomb.

from an unknown newspaper obituary:


BASNNING, April 11. Charles S. Holcomb, pioneer of San Bernardino county and for the past 43 years a leading Banning business man died early yesterday at the home of a son, Harry G. Holcomb, in Whittier, following an operation.

Mr. Holcomb, member of a prominent Inland Empire family, and son of W. F. Holcomb, the discoverer of gold in the mountain valley bearing that name, was 76 years old.

His life had been divided into three periods. As a small boy he had crossed the plains by ox train from his Utah birthplace. As a young man of 21 he left for Tombstone, Ariz. in the height of its mining boom. In 1891 he moved to Banning. Failing health forced his retirement from business a few months ago.

In 1891 Mr. and Mrs. Holcomb came to Banning, where he bought the blacksmith shop of T. L. Lemon, whose widow Mrs. Jennie Lemon, still lives here. Mr. Holcomb combined a hardware store with his b blacksmith shop and through the years built up a splendid business in the location upon which he originally located.

Mrs. Holcomb passed away a number of years ago and their only daughter, Clara, died when a young child. There are four sons, Fred Holcomb, of Los Angeles; Harry Holcomb of Whittier; Douglas Holcomb, of Sawtelle, and Logan Holcomb of El Centro.

Mr. Holcomb was one of Banning's best loved pioneers. No civic move for the betterment of the community, no appeal for the unfortunate ever went unheeded by this splendid citizen. He was generous to a fault and his loyalty to his family, friends and community won him hosts of admirers and friends who will grieve with his family at his passing.

Funeral services will be held Saturday afternoon at 2 at the Community Methodist church, with the Rev. Lawrence Warren officiating. Interment will take place at Sunnyslope. 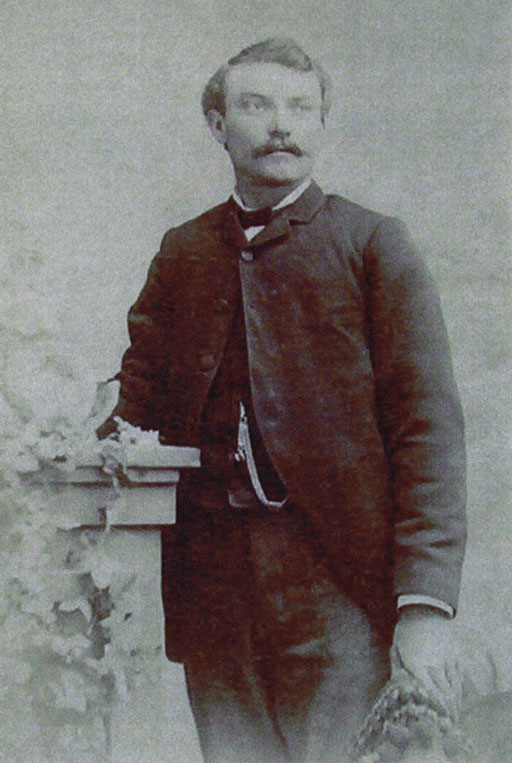 b. April 1890
Charles McKinney was born in April 1890 at IN.1 He was the son of George McKinney and Eliza Lydia Oliver.1

Funeral services will be held at the Osterhoudt-Madden Funeral Home, 69-71 Maple St. Harpursville, on Monday at 11 a.m. Rev. William Fowler, Pastor of Bethel Chapel, Harpursville, will officiate. Burial will be in Vestal Hills Memorial Park. The family will receive friends at the Osterhoudt-Madden Funeral Home on Sunday afternoon from 2 to 5 p.m. Memorial contributions in memory of Jerome may be made to a charity of one's choice.

b. circa 1705
Mary Noyes was born circa 1705. She was the daughter of James Noyes and Anne Sanford. Mary Noyes married John Denison. 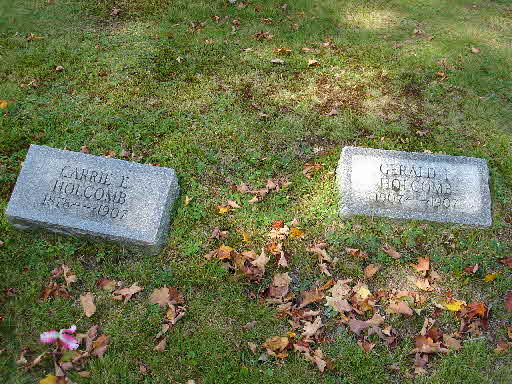 CA Holcombe was the son of US Holcombe. 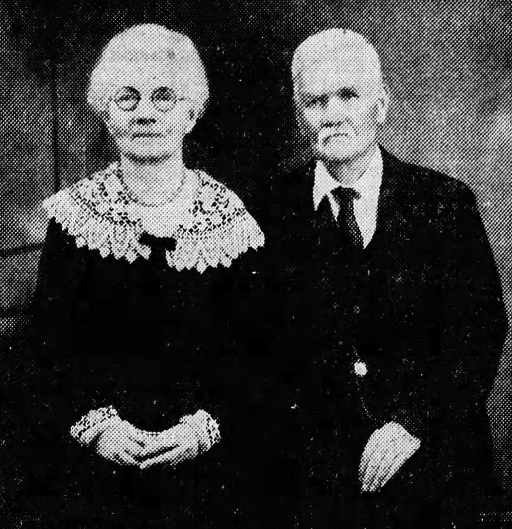 from an undated newspaper:

Funeral services for Francis Leroy Holcomb, widely-known pioneer resident of San Bernardino valley, were held yesterday at 2:30 p.m. from the Stephens & Bobbitt chapel, with the Revs. James Robertson and John B. Cavitt officiating.

Two selections, "In the Garden" and "Sweet Bye and Bye," were sung by Mrs. Robert Hinze. Mrs. Nolte Vaughn accompanied on the piano.

Phoenix lodge No. 178 F. & A. M., of which Mr. Holcomb was a member and the oldest living past master, was in charge of services at the graveside in Pioneer cemetery. 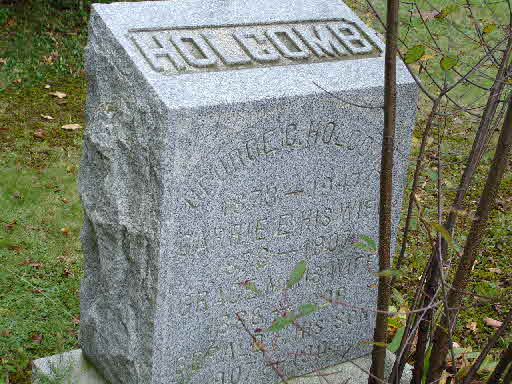 George C. and Caroline were enumerated in the 1900 Colesville, Broome Co., NY, federal census. He was a farmer age 27, she was 22. They had been married 3 years and had no children.

George C. and Grace M. were enumerated in the 1910 Greene, Chenango Co., NY, federal census. He was 37, she was 22. It was his second marriage. Grace had one child, none living. They were living next door to Ulysses Ingraham and his family.

George C. and Grace M. were enumerated in the 1915 Barker, Broome Co., NY, state census. He was a grocery merchant age 41, she was 24. The only child in the household was Genevieve 1.

George Case Holcombe registered for the draft on 12 September 1918. He was a store keeper in Chenango Forks, NY and Grace was his nearest relative.

George C. Holcomb, a retired merchant, died this morning at the home of a daughter, Mrs. Watson Hayes, in Chenango Forks. He was 74. Mr. Holcomb who operated a general store in Chenango Forks for several years prior to his retirement about three years ago, was found dead in bed of an apparent heart attack. A native of Tunnel [Broome Co., NY], Mr. Holcomb was a member of the Congregational Church of Chenango Forks. His body was removed to the Root Funeral Home in Greene pending funeral arrangements. Besides his daughter, Mr. Holcomb is survived by a son Gerald, of Hillcrest; a brother, Edwin, of Binghamton, and two sisters, Mrs. Mary Warner and Mrs. Ellen Ingraham, both of Chenango Forks.

b. circa 1874
Edwin F. Holcombe was born circa 1874 at NY. He was the son of Sidney Smith Holcombe and Jane McCullough.

b. July 1861
William Peck was born in July 1861 at VT.1 He married Harriet S. Holcombe, daughter of Frederick Julius Holcombe and Harriet E. Bliss, circa 1894.1 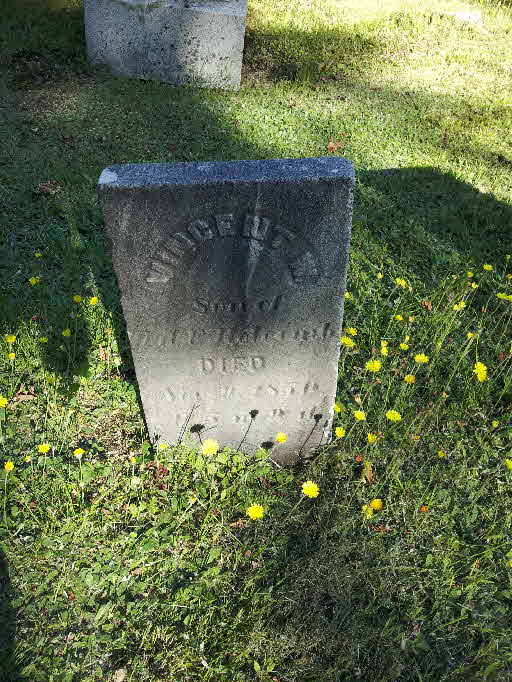 From the Southwest Daily News, 27 January 2013, viewed onlline at genealogybank.com on 3 October 2017:

Rosemary Marshall Alford passed away quietly on Wednesday, January 23, 2013, in Sugar Land, Texas. She was the daughter of the late Dr. Robert Bruce and Rose Marshall of Sulphur.

Rosemary was preceded in death by her brother, Robert Bruce Marshall, Jr., and her great granddaughter, Layah Faith Shelfer.

Rosemary taught school for 29 years and retired in 1991 from the Liberty Independent School District, where she treasured the relationships made with her fellow teachers and students. She enjoyed teaching history, United States geography and reading. In her early retirement, Rosemary enjoyed quilting and making mayhaw jelly for her family and friends. Later on, her day was filled with crossword puzzles, As the World Turns, reading ghost stories and watching a good car chase on TV.

With her love of history, Rosemary was proud to become a member of the Libertad Chapter of the National Society Daughters of the American Revolution. Her dream job was to be a character docent in Williamsburg, VA in one of the historical homes.

Mrs. Alford was born in New Orleans, on March 1, 1927 and grew up in Sulphur. She graduated from Sulphur High School and earned her teaching certificate from University of Southern Louisiana. It was there on a blind date she met her future husband, Raymond Alford. They were married on August 9, 1948 in Sulphur and raised their three daughters in Liberty, Texas.

Survivors include daughters, Alison Alford of Liberty, Texas, Paula Alford Burns and her husband George of Wharton, Texas, and Renee Alford Shelfer and husband Jonathan of Pelham, Ala; and grandchildren Amanda Harris and her husband Jeremy and their daughter, Eleanor Rose, of Pelham, Ala. and Matthew Shelfer and wife Mika and their children, Tobias Gabriel, Luke Jeremiah and Arwyn Hope of Alabaster, Ala.

In lieu of flowers, the family requests a donation in her memory to the Geraldine Humphries Library in Liberty, Texas or to the Libertad Chapter of the National Society Daughters of the American Revolution.

Plans for a memorial service will be announced at a later date.