Marshall was the former vice president and patent department head for AMP, Inc. in Swatara Twp., PA, and a former partner in the New York City law firm of Curtis, Morris and Safford; a graduate of Massachusetts Institute of Technology and George Washington Law School and attended Harvard Law School; was a former board member of the American Red Cross and formerly headed the Symphony Association, both in Harrisburg, PA; was a volunteer and board member of Naples Community and North Collier Hospitals; had been a board member of the United Way of Collier County; was a past president of the Port Royal Club; and a member of the Bonita Bay and Naples Yacht Clubs.

Children of Violet May Strong and Kenneth Edward Gillett

Children of Kenneth Edward Gillett and Violet May Strong

From the Springfield Republican,16 September 1942, page 2:

Southwick, Sept. 15--Kenneth Edward Gillett Jr., 27 died tonight after a long illness. He was born in this town on June 20 1915, son of Kenneth E. Gillett and Violet (Strong) Holcomb, attended the local schools and was a graduate of Westfield high school and the Taft school in Watertown, Ct. He also attended Massachusetts State college, Cornell and Maryland univesity.

He was manager of the Gillett flower and fern farm of this town, which was founded by his grandfather, Edward Gillett. He was a well-known amateur golfer in his section. He married Janet Lefever of Westfield, September 3, 1934.

Besides his widow, he leaves his mother, Mrs. A. Maynard Holcomb of Washington, D. C; two brothers, Corp Donald M. Gillett at Midlands Flying school, Midland, Tex. and Private Thornton R. Gillett of Fort Devens. The funeral will be held at his home Friday afternoon, at 2, with Rev. William F. Davis, Jr., of Ronkonkoma, L.I. officiating. Burial will be in New cemetery, this town.

Don was born April 8, 1919, in Southwick Mass. After the death of his father when Don was 13, his mother remarried and they moved to Washington, D.C., where he attended Wilson High School and later the University of Maryland, where he graduated with a degree in business administration. He also served four years in the Army Air Corps, stationed in Midland, Texas, where he served as a chaplain's assistant. He also played organ for services on "folding field organs and the mighty Hammond" as quoted.

Don's musical interest started when he was four years old, his parents having taken him to a number of organ recitals at the Municipal Auditorium in Springfield Mass. He started piano lessons at six years old with Dorothy Mulroney who was the organist at the Municipal Auditorium. After moving to Washington, D.C., he studied piano and organ with Lewis Atwater, a well-known Washington, D.C. musician, who was organist at All Souls Unitarian Church and also Washington Hebrew Congregation. Don's interest in organ building also started with the study of the organ.

His first job was with Lewis & Hitchcock in Washington, D.C. Four years later he was hired at Aeolian-Skinner with a desire to learn voicing and tonal finishing, working under G. Donald Harrison and Herbert Pratt. In later years, Don became a vice president and head tonal finisher. Upon the retirement of Joseph Whiteford in 1968, Don was offered the opportunity to buy up controlling interest in Aeolian-Skinner, and then became president and tonal director.

In the early 1970s, Aeolian-Skinner was building the last three jobs, St. Bartholomew's NYC, Trinity Wall Street and Kennedy Center in Washington, D.C. The company was then sold.

In March of 1972 Riley Daniels offered Don a job at Moller as head flue voicer. After the death of John Hose, he became tonal director, and eventually a vice president. Don retired from Moller in 1991.

Don Gillett was also an avid art collector and had a large art collection. He served on the Board of Directors of the Washington County (MD) Museum of Fine Arts.

He is survived by his companion of 40 years, Warren S.Goding of Hagerstown; sister-in-law, Jane Mace of Palm City, Fla., and cousin, Mary Davis of Fort Lee, N.J.

He was preceded in death by his brothers, Kenneth and Thorton.

A memorial event will be announced at a future date.

Arrangements have been entrusted to the Douglas A. Fiery Funeral Home, 1331 Eastern Blvd. North, Hagerstown.

Memorial donations may be made to the Washington County Museum of Fine Arts, P.O. Box 423, City Park, Hagerstown, MD 21741.

Children of Carl A. Norman and Elizabeth Holcombe

Child of Clintina A. Burton and Charles Henry Holcombe MD

b. 8 May 1892
Candace Holcombe was born on 8 May 1892 at Brookline, MA. She was the daughter of Charles Henry Holcombe MD and Clintina A. Burton.

Robert Alchin served in the Civil War for Illinois and mentioned in one of his letters home having heard from his brother-in-law Monreo Holcomb. Robert returned from the war and resumed his peacetime occupation, but by the 1870 census he was dead, leaving a widow and three young children. Their mother Catherine was employed as a schoolteacher, and she and her mother shared the responsibility for the children. Then in the summer of 1872, the Grim Reaper appeared again and Catherine succumbed. Now Juliet Holcomb, age 54, was the sole support and protector of her grandchildren.

b. circa 1843
Hiram Holcombe was born circa 1843. He was the son of Chandler Holcombe and Juliett Moore.

Sabra was enumerated in the 1860 Granby, Hartford Co., CT, census, with son Lemuel W. in the household.

The families of Jabez and Sophia are confused and appear twice.


It is apparently this Abijah and Lydia who were enumerated in the 1850 Ward 2, Troy, Rensselaer Co., NY, federal census. He was a cabinet maker, age 43; she was 40. Edward A. Holcomb, age 16 was also in the household.

Lemuel is recorded with family and mother in the 1850 census of Granby, Hartford Co., CT as a farmer.

Lemuel and Mary are enumerated in the 1860 Granby, Hartford Co., CT, census with Oliver, Lorenzo, Louisa, and Clifton in the household.

Mary is enumerated in the 1870 Granby, Hartford Co., CT, census only with Clifton L. in the household.

The families of Jabez and Sophia appear twice in Bowman. Here as son of Elijah and Violet Cornish, then also as son of Martin and Christian Winchell.

Child of Lemuel Holcombe and Mary A. Louisa Viets 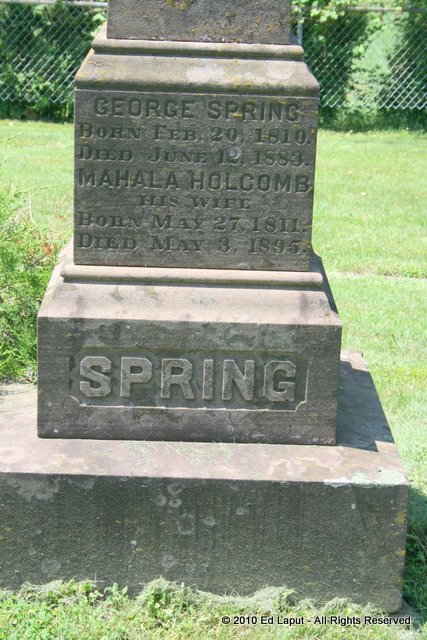 Mahala Holcombe was born on 27 May 1810 at Granby, Hartford Co., CT.2 She was the daughter of Jabez Holcombe and Sophia Goddard.3 Mahala Holcombe married George Spring, son of Thomas Spring II and Jerusha Pomeroy.2 Mahala Holcombe died on 3 May 1895 at Southwick, Hampden Co., MA, at age 84.4

George and Mahala were enumerated in the 1860 Granby, Hartford Co., CT, census. He was a farmer, age 50, she was 49. Monroe, Madison, Lewis, and Amanda were in the household. 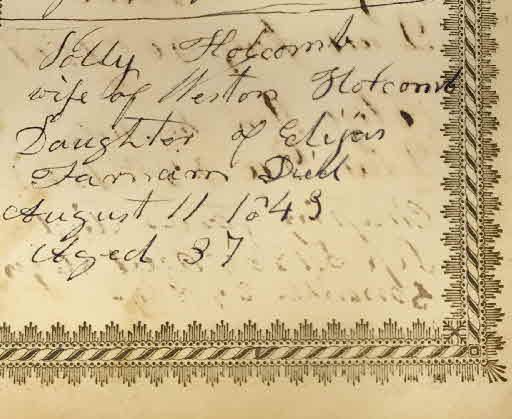 Polly Farnum was born circa 1806. She was the daughter of Elijah Farnum. Polly Farnum married Weston Holcombe, son of Jabez Holcombe and Sophia Goddard. Polly Farnum died on 11 August 1843 at NY. She was buried at Upper Page Brook Cemetery, Greene, Chenango Co., NY.1