Bowman questions the wife. William Holcombe was the son of Hermaz Holcombe and Lucy Alford. 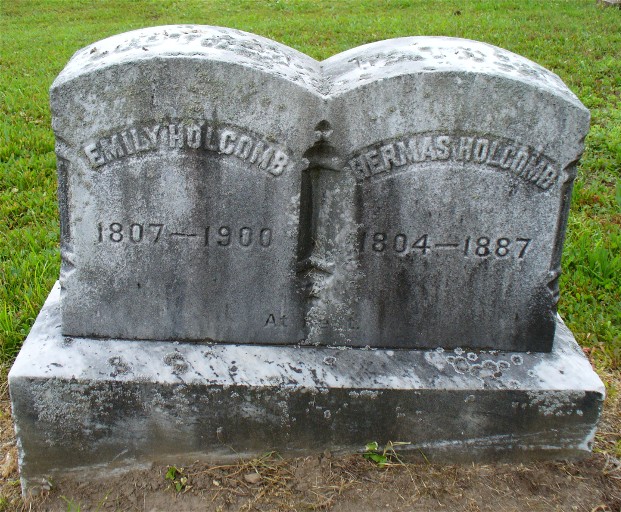 Emily was recorded in the 1900 Windsor census, widowed, living with the family of her daughter, Ellen Clark. The record indicated that she had only one child.

Mrs. Emily Holcomb, who was 93 years of age and the oldest person in town, died Sunday night. She had been sick about three months and death was due to old age. She was he widow of Hermas Holcomb and is survived by three sons and two daughters. The funeral will be held at 3:30 p.m. in the chapel at Elm Grove.

Almeron and Annis were enumerated in the 1850 Victory, Cayuga Co., NY, federal census. He was a farmer age 26, she was 21. Son Wallace was 11 months. Living next door was Allen Holcombe, his 4th cousin, once removed.

Child of Almeron Holcombe and Alice (?)

Child of Alice (?) and Almeron Holcombe

Mary Holcombe was the daughter of Hermaz Holcombe and Lucy Alford.

Both Stiles and Old Northwest Quarterly 6:191 f., kill Jerusha off before Jonathan and make him marry secondly, his stepmother, Martha (Loomis) (Phelps) Buttolph!

There were nine children of this marriage.

b. 7 April 1730
Daniel Buttolph was born on 7 April 1730. He was the son of Dr. Jonathan Buttolph and Elizabeth Cornish.

Noah was a farmer and resided in Simsbury, where the dates of birth of some of his children are recorded. He was a member of the Congregational church in that town in 1777. His will was dated Oct. 15th, 1790, and proved Dec. 13, 1790; mentions wife Margaret; son Joel and two daughters, Elizabeth and Amelia, children by his 1st wife; also sons Noah, Theodore, Chauncey, Enoch, Gideon, Pliny and Friend; and daughters Lavinia Barber, Roxana, Dorothea, and Cecilia Humphrey. The estate was distributed Mch. 11th, 1795.3

Osias Holcombe died young. This son is not mentioned by McCracken or Seaver. He was the son of Judah Holcombe and Hannah Buttolph. 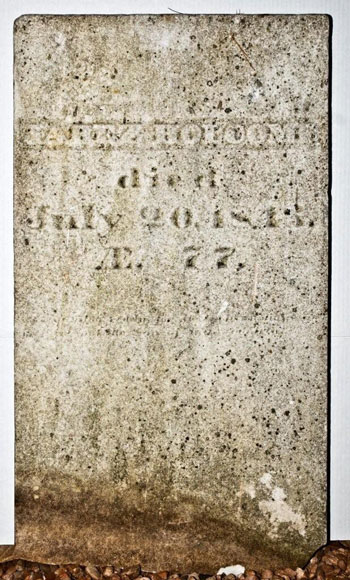 McPherson appears to correctly list Jabez and Sophia here and Jabez and Ann Hosmer as her A-6-7-5-8.

From the SBHS News:

An eccentric railroad engineer, William Eli Talbot, had taken the stones (from East Granby's Smallpox Cemetery) and built them into the foundation of his workshop. Talbot also added an eclectic mix of other stones.

. . . one headstone that came from a North Granby Cemetery was found on is former property.

This was the stone of Jabez Holcomb, born 29 Sept 1765 and died 20 July 1843, age 77. He was the son of Elijah and Violet (Cornish) Holcomb and the husband of Sophia (Godard). Jabez was buried in a small family cemetery located across from 200 Loomis Street in North Granby, "on a little eminence about a hundred feet west of the highway."

There were only five stones and probably seven burials in this little graveyard. Three generations of Holcombs were buried here. Jabez and his wife Sophia were the elders. Their unmarried son Almanzor, died in 1845, age 28, and Louisa Augusta, wife of another son, Lemuel, died in childbirth at the age of 30, in 1844. The youngest was the first to be buried in the cemetery. Little Martha Ann, infant daughter of Lemuel and Louisa, died in 1839, as spring was turning into summer. She was seven months and 25 days old.

Unfortunately, this cemetery has completely disappeared. When the Holcomb farm was sold, the new owners used the land for pasture and cows grazed amid the stones. Eventually the gravestones fell, were broken, and finally disappeared during the 1950's. Without the Hale Collection listing the gravestone inscriptions, there would be no record of the burials.

Ironically, the only stone to survive is the one that was removed (perhaps with permission of the land owners) by Mr. Talbot. Since the exact location of the Holcomb Cemetery is lost, the gravestone of Jabez Holcomb will be kept at the Salmon Brook Historical Society with an explanation of its history. 5

Prior to her marriage to Levi Gozard, Mary Gozard had an illegimate daughter, Sophia, and the father was not named. 4