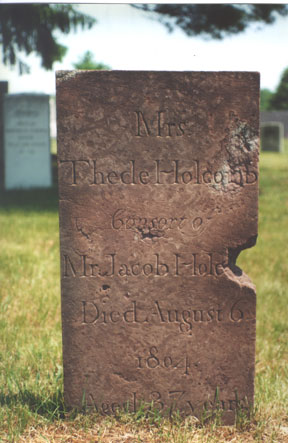 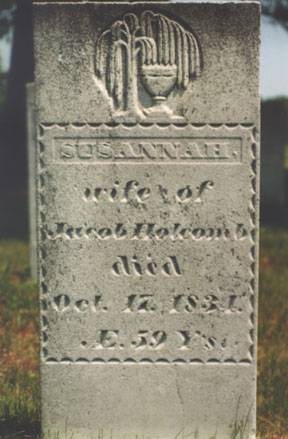 Seaver notes that wife may have been Roxanna Higley, but Bowman lists her as second wife.

Seaver justs lists children Lydia and Polly, Granby records indicate that he had Sarah, while Weir states that he also had James Henry and Abel.

The Granby Town Records and the Census list him as Abel 2nd.

b. 3 March 1792
Polly Holcombe was born on 3 March 1792. She was the daughter of Abel Holcombe and Roxanne Higley.

The West Granby sexton has burrial in 1813, but most 1813 dates are incorrect. 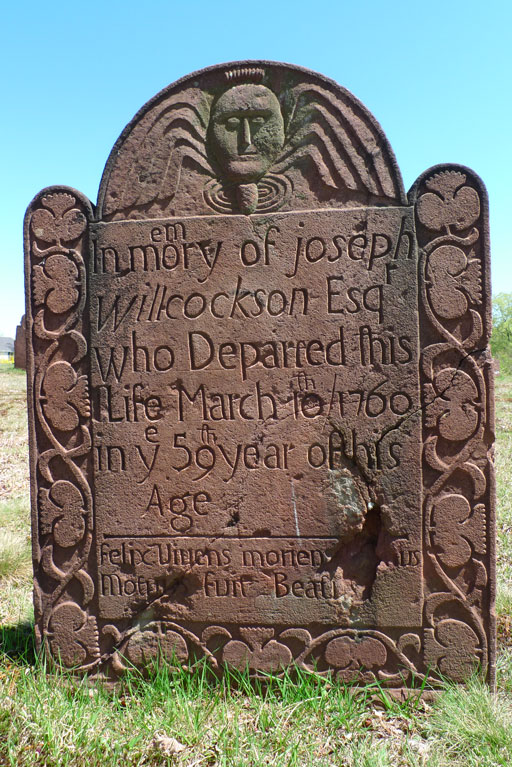 Probate of the estate of Joseph Willcockson, Esq., of Simsbury, case number 6026, Abstracted July 2004, by Sarah Gates Sully from a copy of the original at the Connecticut State Archive.

McCracken notes that it was probable that Damaris was not baptized immediately after birth as her first child was born 1727. Mr. Gamaliel Ward informed the Simsbury clerk that the first eight of his children were born at Hartford (L. B. Barbour found no births recorded there), but he did not say this until after the birth of the 10th, when his memory may have been hazy. The Ward Genealogy, cited above, says that the first five were born at Union, the 6th at Somers. William Gamaliel Ward was born on 2 October 1694. He was the son of William Ward. William Gamaliel Ward married Damaris Holcombe, daughter of Sgt. Jonathan Holcombe and Mary Buell. William Gamaliel Ward died on 6 June 1774 at Simsbury, Hartford Co., CT, at age 79.

Obadiah Ward was the son of William Ward.

Deanna Bowman shows Damaris as a daughter of Sgt. Jonathan Holcombe and mary Buel (Vol 1, page 73). Given that Ruth shows that Jacob and Margaret Had 3 children between when they were married Feb. 10, 1736, and when he died July 27, 1737, it seems unlikely that these were their children. Perhaps they were from an unrecorded earlier marriage of Jacob's?

Mary Holcombe was born on 10 July 1717 at Simsbury, Hartford Co., CT. She was the daughter of Corporal Samuel Holcombe and Martha Phelps. Mary Holcombe died on 27 January 1802 at age 84. Seaver does not mention this child. In McPherson, page 194, Mary who on 15 August 1739 married Amos Case is misidentified as the daughter of Samuel Holcombe, whereas she was the youngest of the seven children of Jonathan Holcombe. His will dated 29 May 1759 refers to her as "Mary, wife of Amos Case." In the will of her brother Jacob, who died 29 July 1737, before her marriage, she is referred to as "sister Mary." The will of her grandfather, Peter Buell, also refers to her as "Mary Case," along with Damaris Ward and Azariah Holcomb, called children of Jonathan Holcomb. 4

Seaver indicates that he moved with his brother Jonathan to St. Albans, Vt., an opinion which McPherson shares. DAR records seem to indicate otherwise, showing his death in Massachsetts.

McCracken asks: Did he marry Mary Hillyer, daughter of James and Mary (Humphrey)Hillyer? He is mentioned in his grandfather's will and was probably living 1790 in Sheffield, MA (3/0/2), next to Plinny (1/1/1).

McPherson only lists one child, Mary. Norment lists others.

b. 19 August 1735
This child not mentioned by Seaver. McCracken notes he was not in grandfather's will in 1759, so perhaps not the Plinny living next to Michael in 1790 at Sheffield, MA (1/1/1). Also not mentioned by Ruth Cost Duncan. Pliny Holcombe was born on 19 August 1735 at Simsbury, Hartford Co., CT.1 He was the son of Jonathan Holcombe and Amy Case.

Children of Hannah (?) and Philip Loomis

The Vermont Historical Gazetter, Vol, *, pt 1, pg 83, indicates they moved in 1802 to Westport, VT. Simsbury records, Loomis, and Weir indicate that they had the following children.


Seaver has this family confused with others, among them his son, Abner G., and with Abner Johnson Holcomb, the ancestor of Deanna Holcomb Bowman.

b. 18 May 1733
Elizabeth Holcombe was born on 18 May 1733 at Simsbury, Hartford Co., CT.1 She was the daughter of Deacon Azariah Holcombe and Hannah Loomis.


"Massachusetts soldiers and Sailors in the Revolutionary War, Vol. 8, page 91, lists two Eldad's, one being listed as "3d" .

Seaver notes that wife could have been Mary or Mercy and questions if Ebenezer was her father. Seaver and Loomis list 7 children, Weir lists 7 others.

Harvey Holcombe was the son of Lt. Benjamin Holcombe and Mary Kendall.

b. 1782
In an ironic difference, McPherson and Seaver have confused this John, born 1782 in Ct.

Seaver says this John is his Great Grandfather, but that he is descended from Thomas-Joshua-Joshua-Phineas-John; on Page 20 of his book.

For now, Seaver himself appears where he wanted, under the Joshua line, while further research is done. Finding birth records in CT will not be very helpful, there were apparently two Johns who went with their fathers John and Benjamin, to Panton, Vt. Perhaps wills or probate records will help.

John was a farmer, stockman,"champion" deer hunter and trapper in the Adirondack Mountains, NY. During the War of 1812, while at his hunting shanty in the mountain forest, he was captured by the Indians and sold to the British as a prisoner of war. His family considered him dead, but after a time, when it was ascertained that he was not a soldier, he was liberated and returned home. After his release he moved to Cattaragus Co., NY. During his absence, his wife "distributed" the children among relations.
John Holcombe married Mary Lynde, daughter of Jonathan Lynde and Molly Franklin. John Holcombe was born in 1782. He was the son of Lt. Benjamin Holcombe and Mary Kendall.

Lyman Hardy Holcombe was the son of Lt. Benjamin Holcombe and Mary Kendall.

Gravestone has Louis instead of Lois.

Respected in life and lamented in death.

Bowman cross references to Lois Holcombe/Noah Cooley who was daughter of Matthew Holcombe.

#8347 is dau. of Deacon Azariah Holcombe and Hannah Loomis.

The second one, her # 4564, page 131, she does continue and shows six children including Philetus.