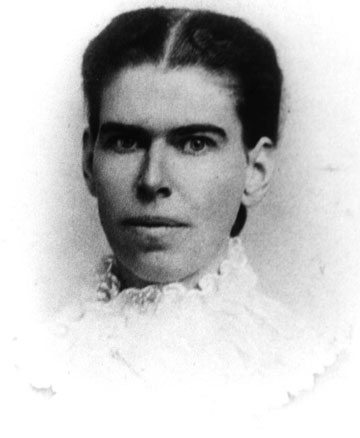 Irving was a naturalist, a specialist in botany and gathered in his home garden wild flowers that thousands of garden club members, students and botanists from many countries visited. He also made research and wrote on ornithology and wildlife in general. Died unmarried.

Irving was listed in the 1920 census of Granby, CT, page 4A, line 13, age 64, as the head of the household (listed as married) with his sister Fanny, and cousin Mary.

Irving was enumerated in the 1930 West Granby Village, Granby Town, Hartford Co., CT, federal census, page 13B. He was a single nurseryman, age 74. His sister Fanny H. was also in the household, age 72.


GRANBY NATURALIST KNOWN AS AUTHORITY ON STONES AND ORCHIDS3

In the town of Granby in the shadow of Bear Mountain and within a short distance of the picturesque Barn Door Hills lives Irving Holcomb, collector of woods, flowers, minerals, and stones. Mr. Holcomb will observe his seventy-fifth birthday next Monday. In his life of seventy five years, he has found his recreation and fun in studying the things of nature and amassing a collection which to the novice is bewildering by its size and multiplicity of specimens. He is one who has obeyed the poetic command, "Go forth under the open sky and list to Nature's teachings."

Mr. Holcomb tells of his early experiences of collecting birds eggs and of how upon observing the distress of a pair of Pine Groosbeaks, a very rare bird in this vicinity, when they found that an egg had been taken from their nest. The distress of those birds caused Mr. Holcomb to return the egg and to give up collecting. It was then that he turned his talents to other things, the collecting of which, to use his own words, "would not hurt anything."

Specimens of all the woods, seventy four, in number, known in this part of the country Mr. Holcomb has arranged in a cabinet built into the wall of his living room. Each specimen is about an inch and a half in diameter and shows the bark, a cross section, a diagonal grain and the flat grain of the wood. All of these he can call by their botanical name as he can also tell the name cones of the coniferous trees. In his collection of cones are many from different parts of this country, some as small as a thimble, others larger than a pineapple. Strange as it may seem the cones of the giant Redwoods of California are among the smallest. Many of these specimens have been sent to Mr. Holcomb by other collectors who have exchanged with him. In the same way he has acquired samples of woods not native to these parts, mahogany, ebony, cork, and others from the tropics.

Passing to the two large cabinets where are stored hundreds of samples of minerals and stones, we find a wealth of materials, many of much value because of their peculiar formation and the intrinsic worth of the mineral. From the quarries of this vicinity are samples of copper from East Granby, iron from the Dyer mine in Canton and the mine in Salisbury made famous in Revolutionary war days, soapstone from Barkhamsted where it is related that the Indians used to fashion their crude dishes. Precious minerals from Western mines as well as gold from Nova Scotia are to be found. Lake Superior mines are represented with copper and iron. Mr. Holcomb's knowledge of these ores was once very valuable to him when promoters tried to interest him in a local copper mine by showing a sample of the ore to be found in it. He recognized the sample as coming from the Lake Superior region. Quartz crystals gathered locally also from Little Falls, N.Y., and more distant points are to be found. Very interesting are the exhibits of smoky quartz, one from Pike's Peak, being very good. Prized for its beauty and association is a sample of serpentine sent to Mr. Holcomb by the late governor Pennypacker of Pennsylvania. Mr. Pennypacker, we are told, had one of the most complete collections of this type of mineral ever made.

Turning to the floral world Mr. Holcomb has been interested in ferns and orchids. It was pointed out that Granby is particularly rich in these flowers because here the northern and southern flora overlap and the terrain ranges from the fertile lowlands of the Farmington Valley to the hills several hundred feet high. Here have been found by Mr. Holcomb forty-one of the forty-nine species of ferns known to this part of the world. Thirty-two of the forty-one known orchids have their habitat here, some of them among the most rare.

The collection and knowledge of Mr. Holcomb has attracted the attention of university men. Professor Rugg of Dartmouth coming to him about flowers and Professor Penfield of Yale concerning nimerals. At poresent he is assisting Mr. Lincoln of Pittsfield, Mass., who is compiling a more compete work on orchids than now exists. From the intense interest and satisfaction which Mr. Holcomb derives from his search for minerals and flowers one cannot help but feel the meaning of those words of Bryant:

To him who in the love of Nature holds
Communion with her visible forms she speaks
A variouis language.

Fanny was a naturalist and writer; lived with her brother, Irving. Died, unmarried, of a serious illness following the death of her brother, at home.4

d. young
Japhet Holcombe died young. He was born at Granby, Hartford Co., CT. He was the son of Alson Holcombe and Candace Almina Holcombe.

Clyde Holcombe was the son of John Albert Holcombe and Minnie Delbridge.

Delbridge enlisted in the US Navy and served in the Pacific.

Blanche Holcombe was the daughter of John Albert Holcombe and Minnie Delbridge.

Lyell Burke was the son of Charles H. Burke and Lucy Antoinette Holcombe.

Dr. George Burke was the son of Charles H. Burke and Lucy Antoinette Holcombe. George was engaged by the Sou. Pac. RR hospital; in 1941 he went into service of the US Navy in its California coast camps and hospitals; went to Yard Dispensary at Pearl Harbor, April 1942 as a 1st Lt. and was there past May 10, 1943.

Kay Burke was the daughter of Charles H. Burke and Lucy Antoinette Holcombe. Kay was a nurse.

b. October 1873
Sunney A. Rice was born in October 1873 at CA. He was the son of John Rice and Florence Nevada Holcombe. Striking resemblance to his cousin, William Thompson Holcombe.1

b. August 1879
Mabel Rice was born in August 1879 at CA.1 She was the daughter of John Rice and Florence Nevada Holcombe.

Abraham was enumerated in the 1850 Granby, Hartford Co., CT census, age 73, a landlord. Milo was living next door.

Alexander moved from Bloomfield, CT, to Albany, NY, where he chopped wood to earn money for removal trip to OH on which he carried on a bob sled his wife, young children, feather beds, pots, pans, etc. Henry Lyman Holcombe, his nephew, when sixteen years old drove the sled to Albany for him. He transferred en-route to Trumbull Co., OH, from the sled to a lake boat which shipwrecked.

Alexander became blind many years before death. Henry Lyman Holcombe visited his uncle Alexander there while blind and expressed regret that he did not take him back to CT with him. 5

Alex and Ascenath were enumerated in the 1850 Middlefield, Geauga Co. OH, federal census. He was 67, she was 59. Jeanette was enumerated nearby.

Alex and Asenath along with all of their living children except William Harrison Holcombe removed to Winnebago, IL sometime in 1851.

Much of the information on this family is from We Remember People 0f Our Past, Vol 4, by John D. Rowley; viewed on-line at FamilySearch.org. 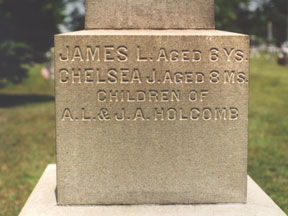 Children of Margaret (?) and Edward Griswold