b. October 1668
Margaret Griswold was born in October 1668 at Norwich, New London Co., CT. She was the daughter of Francis Griswold and Sarah (?)

from a rootsweb site that had no citations:

Jonas was the emigrant to America that founded the Westover family of New England which spread throughout America. Jonas came from England. The family lived in Taunton, Somerset where he was born. The exact date of his arrival in America was not definitely determined as of a search performed in October 1961 in the New England records.

Early genealogical records give Jonas as a boy of 14 years of age arriving in Simsbury, Connecticut in the year 1654. This would give a birth date of the year 1640. Other dates give some substance to this date. He became a freeman in 1658, he received title to a lot in Simsbury and he was married in 1663 -- he became a freeman at the age of 18, a propertty owner at 21 and married at age 23.

Other sources state that a Jonas Westover was in Windsor in the year 1649 and assume this Jonas to be the Jonas from England born in the year 1620. These sources give this Jonas as the one who married Hanna Griswold in Simsbury. Further research may be needed to establish the correct birth date of the emigrant.

Jonas Westover entered America through Massachusetts Bay, as that was the most commonly used entry at that time to the New England area. He had relatives there when he arrived. One relative was Jane Westover who had married 20 November 1647 William Williams. Jane lived in the Simsbury area of Connecticut at the time of Jonas' arrival in Windsor.

After the birth of their first child they moved southward to a new settlement called Killingworth. The move was made with the father-in-law's family, the father-in-law having helped found the new settlement. There they lived for about eleven years and then moved back to Simsbury. Jonas and his family had been active members of the established First Church of Killingworth.

George came ahead of his family on the Mary and John to Dorchester and in 1636 to Windsor where he was a surveyor and Indian trader. He later moved to Fairfield. As a follower of Roger Ludlow, he was instrumental in establishing the commonwealths of Connecticut and Massachusetts.

Children of Joseph Griswold and Deborah (?)

b. 7 March 1833
Catherine D. Holcombe was born on 7 March 1833 at Norwich, Chenango Co., NY. She was the daughter of Robert Burgess Holcombe and Maria Harrington. 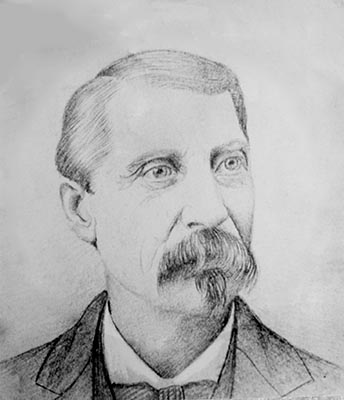 Bradford F. Holcomb was an assistant surgeon with the 36th Ohio Volunteer Infantry from October 10, 1861 until 27 July 1865.

Bradford and Esther were enumerated in the 1880 Lick, Jackson Co., OH, federal census. He was a Physician surgeon, age 42, she was 43. Children in the household were Willard A. 12, and Bertha 6.

While most folks believe the 1890 census was destroyed in a fire, Bradford appears in a Special Schedule of Surviving Soldiers, Sailors, and Marines, and Widows. At the time he was in Jackson, Jackson Co., Ohio.

from the Jackson Standard-Journal, Wednesday, October 29, 1902:

Dr. B. F. Holcomb died at the home of his daughter Mrs. Lloyd Jones at Fostoria, Ohio, Tuesday, October 21. The remains were brought to Vinton, Ohio, where the funeral was held Friday, Oct. 24, at 1 p.m., Rev. D. H. Jones of this city, officiating. The following obituary was prepared by Mr. Willard Holcomb, the only son of the Doctor:

Bradford F. Holcomb born near Norwich, Chenango County, New York, April 15, 1835, worked on his father’s farm in boyhood, took pride years afterwards in pointing out the stone fences still standing which he helped to build, was educated at Norwich Academy, taught school and began the study of medicine, came to Vinton in Spring of 1858 to visit his uncle Hon. Anselm Holcomb, and continued medical studies with Dr. Ira Holcomb.

Here he recovered his health, found his best friends, his chosen helpmate and his happiness. Here he was initiated into the Masonic brotherhood, of which he was a lifelong member. Here he enlisted in the Army of the Republic, first as Lieutenant of a Company of Cavalry, and afterwards in old company B of the 36th Ohio Volunteer Infantry commanded by Colonel, afterwards General Geo. B. Crook, and famous as an Indian fighter after the Civil War, first as Hospital Steward, then being promoted to Assistant Surgeon, with the rank of Lieutenant, “Doc” Holcomb, as his old comrades affectionately called him, accompanied his fighting regiment throughout the war, South Mountain, Antietam, Chicamauga, Missionary Ridge and Lookout Mountain are some of the battlefields whose names are inscribed in bloody letters on the banner of this regiment, which also held the field at Winchester when Gen. Sheridan made his celebrated ride. His was not the fierce joy of battle, although it was said that no surgeon could keep his ambulances closer to the firing line, and no one responded more quickly to a wounded comrade’s call than Dr. Holcomb. His, rather the long, silent battle with Death in the scantily equipped field hospital, where diseases killed more than bullets. He anticipated modern antiseptic treatment by scrupulous cleanliness , and although his nurses grumbled at the amount of water they had to carry, he seldom lost a case from gangrene or amputated a limb. Furthermore, he believed in humor as the best emollient for all ills, and his unfailing cheerfulness and flow of he quaint, dry wit, did more than medicines in healing that homesickness which is worse than wounds. There are still many old veterans here who can recall the Doctor in his army days, and many of them owe their lives to him.

Of all the offices he was ever called upon to fill, the presidency of his old regimental reunion held at Rutland probably made him proudest, and on that occasion he made his only public speech on record. Returning from the war, he wedded Esther Matthews, daughter of Judge Moses R. Matthews, and moved to New York, where he began the practice of medicine. Again his health failed, and he returned to Ohio, taking up his residence in Jackson, where for nearly a full generation, he ministered unto the physical ills of man, and mingled in the business and social world as one of the best known and respected citizens of Jackson.

Still he loved to return to Vinton at intervals, and especially to the old farm at Beach Hill, which he undertook to manage until his health failed. For years he had suffered from rheumatism and heart trouble contracted during the war, and the climax came in the form of a stroke of paralysis. For a year he battled with pain and weakness, which he had combated so many years for others but was unable to overcome himself. And now his remains are brought back here to rest amid the scenes he loved so well; among the old friends and comrades of his young manhood, and beside the baby daughter who died at Beech Hill nearly thirty years ago, and lies buried in the old graveyard on the hill. He leaves a widow, a son, and a daughter to mourn his loss. 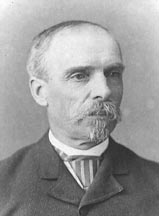 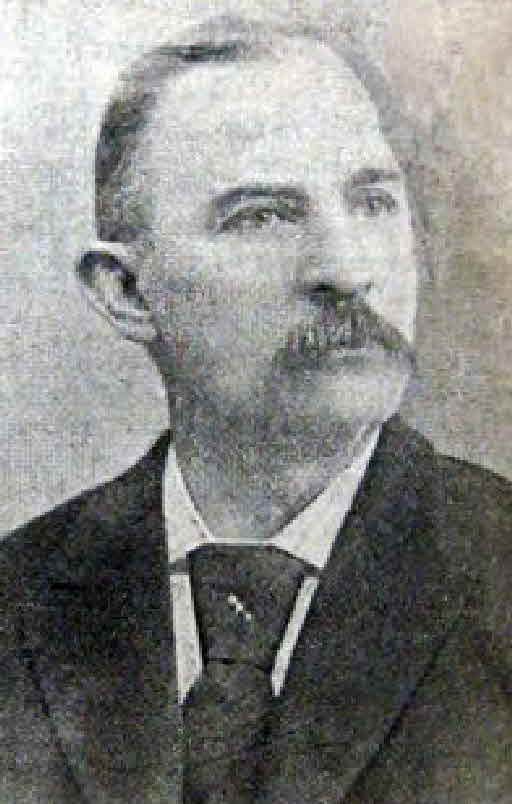 While on a visit to his niece, Mrs. George W. McNitt, on Fair street, this village [Norwich, Chenango Co., NY], A. Burdette Holcomb a well-known resident of Greene [Chenango Co., NY], was taken ill last Friday night and died Sunday. Deceased was born on a farm in the town of Norwich July 4, 1841. For the past 30 years he had resided in Greene, where he married Miss Alice Lyons. Mrs. Holcomb died several years ago.

For some years Mr. Holcomb was manager of the Lyon Iron Works in Greene, but for the last 10 years he had been a traveling salesman, selling cigars. He was a man whom it was a pleasure to know, enjoyed a wide acquaintance and had many warm friends. Mr. Holcomb was educated at the Norwich and Oxford Academies and graduated in a medical course at Ann Arbor, Mich., but never followed the medical profession.

Mr. Holcomb is survived by one daughter, Miss Anna B. Holcomb, of Greene; one brother, R.A. Holcomb, of Ripley, N.Y., and a sister, Mrs. F.B. Sweetland, of Sayre, Pa. His remains were taken to Greene Monday and the funeral was largely attended Wednesday, the services being conducted by the Masonic lodge. A delegation of Norwich Masons and several relatives and friends were present from this village.

b. 2 June 1843
Maria A. Holcombe was born on 2 June 1843 at Norwich, Chenango Co., NY. She was the daughter of Robert Burgess Holcombe and Maria Harrington.

Winfield was an educator, Genesso, Livingston Co., NY, graduated from the State Normal School, Fredonia, NY, June 1886 and took post graduate courses in Greek, Mathematics, and Science; served as principal Ripley, NY school until 1891; moved to Geneseo Sept. 1922 to open the Normal School of which he remained principal until he retired June 1, 1934.


Winfield A. and Catherine C. were enumerated in the 1930 Geneseo, Livingston Co., NY, federal census. He was a State Normal School Principal, age 68, she was 63. There were no children in the household.


A school was named in his honor in 1932 that is now (renamed James B. Welles building) part of the State University of New York at Geneseo.

Information on Albert is from Paul Platt, pep@platt.org.

Information on Ruth and her descendants is from Paul Platt pep@platt.org

Kenneth and Ruth were enumerated in the 1930 Albany, Albany Co., NY federal census. He was a lawyer.

b. 28 May 1903
Edward Louis Holcombe was born on 28 May 1903. He was the son of Winfield Asahel Holcombe and Catherine Cass Lumbard.

She was a long term volunteer at the South Shore Nature Center in Norwell and the Scituate Library and was Director of the Child Care Center at the Weymouth Naval Base for many years.