George became associated with his father in the manufacture of extracts and compounds, at the old homestead. From there he removed first to Lowell, where he continued the business, and about 1839 he established the firm of George c. Goodwin & Company, on Union street, Boston. Later he moved to Marshall street, and thence to Hanover street into still larger quarters. The firm became well and favorably known, and grew into one of the largest wholesale drug concerns in the United States.

Mr. Goodwin was a prominent and generous member and supporter of the First Baptist Church of Charlestown. He was superintendent of its Sunday school for many years, and also of the Baptist Sunday school at Lexington, where he resided for a time. He was a man of unusual intellectual attainments, combined with good judgment, ability and business sagacity. His good penmanship and gift of expression were often mentioned by his friends and business associates. 1

He and Jane had seven children. 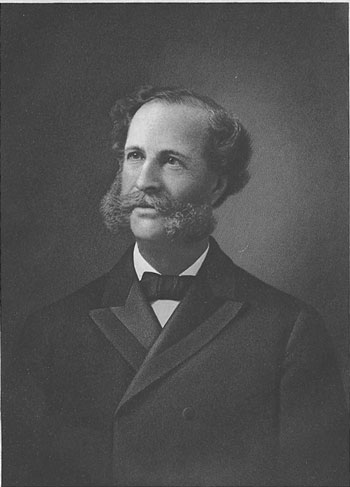 When very young his father moved to Charlestown and afterwards to Lexington, in both of which places he received his education, graduating from the Lexington High School, and entering his father's employ at the age of eighteen years. He inherited many of his father's fine qualities, and applied himself closely to the task of learning the business in every detail. He began as errand boy and worked upwards in the various departments until he was admitted to partnership, becoming the head of the firm when his father died, May 12, 1869. Under his leadership and management the firm grew to large proportions. In January, 1900, the business was incorporated, at the time of consolidation with Cutler Brothers and West & Jenny, two other prominent drug manufacturing concerns of Boston, under the name of the Eastern Drug Company, with Mr. Charles Cutler as vice-president, who at Mr. Goodwin's death succeeded him as the head of the company.

Mr. Goodwin was prominently identified with a number of important interests. He was vice-president of the National Druggists Association. In 1871 he was made a Mason in the Simon W. Robinson Lodge of Lexington, and was its treasurer for many years. He was afterwards a member of Hiram Lodge. He was exalted in Menotomy Chapter, Royal Arch Masons, at Arlington, March 30, 1866. He was a member of the DeMolay Commandery, Knights Templar, of Boston, and in 1869 he joined the Ancient and Honorable Artillery Company of Boston. He was a member of the Lexington Historical Society, and was a Republican in politics.

b. circa 1859
Harley A. Wilson was born circa 1859. He was the son of Andrew Wilson and Julia Elizabeth Holcombe.

b. circa 1876
Alice Agnes Chapman was born circa 1876.1 She married William Gundon Holcombe, son of Duell Holcombe and Ann Loretta Henderson.1

b. circa 1863
Myron E. Wilson was born circa 1863 at WI. He was the son of Andrew Wilson and Julia Elizabeth Holcombe.

b. circa 1914
Alice Holcombe was born circa 1914 at CT.1 She was the daughter of William Gundon Holcombe and Alice Agnes Chapman.1

b. circa 1861
Annie Parks was born circa 1861 at IA.1 She was the daughter of Laban Parks and Rachael Ann Grewell.1

b. circa 1870
Eva Bell Parks was born circa 1870 at NE.1 She was the daughter of Laban Parks and Rachael Ann Grewell.1

Children of Elizabeth (?) and Sumner Holcombe