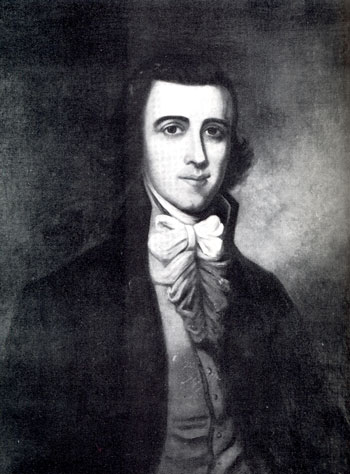 Richard, congressman, was born at "Leesylvania," in Prince William County, Virginia, the son of Henry Lee, a plantation owner, and Lucy Grymes. Scion of the preeminent Virginia political dynasty, his older brothers were the revolutionary war hero Henry "Light-Horse Harry" Lee and Charles Lee, future U.S. attorney general; Arthur Lee and Richard Henry Lee were second cousins. Lee abandoned his studies at the College of William and Mary in 1780. He subsequently settled on the family's Loudon County plantation "Sully" inherited by his father and presently part of Fairfax County. He resided there until debts forced him to sell the property in 1815. Even in the midst of his later congressional career in New York and Philadelphia, Lee corresponded closely with supervisors about the management of Sully and maintained frequent contact with northern Virginia's political and social leaders.

Lee launched his political career as a member of the state House of Delegates from 1784 to 1786 and served again in 1788. Like his brother Henry Lee, one of the leaders at the state convention, Lee was a Federalist during the debate over ratification of the Constitution, playing a notable role in the unsuccessful attempt to steer the ratification ordinance through the legislature without an Antifederalist-inspired circular letter calling for a second constitutional convention. In the first federal election, Lee was one of several candidates seeking to represent the congressional district that boasted both George Washington and the Antifederalist leader George Mason as constituents. Although complete returns are not extant, Lee outpolled his closest Antifederalist opponent in Fairfax County by a ratio of almost four to one.

Lee's recorded votes and speeches on the floor of the House reflect a moderate Federalist's support for a loose constitutional construction favoring a strong central government. He supported the extensive judicial establishment proposed by the Judiciary Act, but his promotion of a strong executive branch was tempered by an ambivalent stance on the president's prerogatives under the Constitution's "advice and consent" clause. A faithful, if reticent, member of the coalition led by James Madison for a Bill of Rights devoid of more structural amendments to the Constitution, Lee ardently supported Madison on such broad economic proposals as levying discriminatory impost and tonnage duties that would have favored America's allies. On more parochial economic matters, Lee adequately defended his district's interests. For example, he attacked high duties on steel farm implements, claiming they aimed at protection of northern manufactures rather than revenue.

Lee's overall contributions to the work of the First Federal Congress were admirable, even apart from considerations of his youth and relative inexperience. His numerous committee assignments focused on trade, revenue collection, and appropriations. His other assignments addressed two issues of particular concern to his constituents: western land sales and the location of the federal capital. Lee's pivotal role in resolving the site of the seat of government was perhaps his greatest contribution to the economic welfare of his district. When, near the end of the first session, the first resolution was made for a centrally located site, Lee moved an unsuccessful substitute that stressed the importance of convenient communication between the Atlantic and the West. Although at the time Lee doubted "the practicability for a long time to come of prevailing on the Eastern and Middle States to remove to Potomack," he was the first congressman to make a formal proposal to locate the capital there.

During the second session, the capital city location became tied to the federal assumption of the states' revolutionary war debts, an item in Hamilton's proposed funding program particularly dear to northerners. Under the terms of the crucial Compromise of 1790, southerners pledged to support assumption in exchange for northern pledges not to obstruct passage of a Potomac site for the permanent capital. Lee initially shared his state delegation's majority position against the assumption, although as early as April 1790 he privately confided to his brother Charles that with a centrally located seat of government to "diffuse the wealth of the Capital in equal measure to the extremes of the Empire . . . the poison of the measure would be very much diminished." By the end of June, he joined the other Virginia representative with a Potomac constituency in promising his vote to the assumptionists. Lee delivered a "very handsome and pathetic speech" when the residence act was first debated on the floor of the House, four days after a Senate committee was ordered to prepare resolutions recommending assumption as part of the funding act.

Lee's alliance with the Hamiltonians was limited to his last-minute switch in favor of assumption and his subsequent vote for duties on distilled spirits to finance it. In the third session he resumed his place in the southern minority that voted against a national bank. His role in the Compromise of 1790 nevertheless continued to haunt him politically; as late as 1797, political enemies were still making reference to "Lee's defection." He won reelection to the Second and Third Congresses, although his support for the administration's foreign policy initiatives led to his increasing political alienation at home. Lee lost his bid for a fourth congressional term after a pamphlet war that focused on Lee's earlier vote for assumption and his later support for Washington's neutrality proclamation and John Jay's unpopular mission to Great Britain.

Lee had married in 1794, and he returned to Sully with his wife, Elizabeth Collins, the daughter of a wealthy Philadelphia Quaker. The couple had six children. He resumed his seat in the Virginia House of Delegates in 1796 and again in 1799-1806, during which time he remained outside the swelling tide of Jeffersonian Republicanism. Lee moved to Washington, D.C., in 1815. He procured an appointment as judge of the orphans' court for the district four years later, serving in that position until his death, in Washington.2

QUEENSBURY - Mary-Frances Callanan passed away on Thursday, July 29, 2010, at her home in Queensbury.

She was born on Sept. 17, 1942, in Plattsburgh, N.Y. The daughter of Francis J. and Prudence (Holcombe) Callanan, both of whom predeceased her. Mary-Frances was a graduate of Keeseville Central School, Keeseville, N.Y. and the College of St. Rose, Albany, N.Y. Mary-Frances was retired from the State of New York Department of Human Services. She was a member of the Daughters of the American Revolution and the Society of Mayflower Descendents.

She is survived by her sister, Joanna (Callanan) Weir and her husband, Robert of Lexington, Va; her two nieces, Anne Elizabeth Weir of Richmond, Va. and Mary-Frances Weir Billups and her husband, William III, their children, Sarah Catherine and Robert of Meridian, Miss.

Per her wishes a graveside service will be held Friday, Sept. 17, 2010, at 11 a.m. at Immaculate Conception Church Cemetery in Keeseville, N.Y.

b. circa 1871
Ella May Bechtle was born circa 1871. She was the daughter of John Bechtle and Mary Eliza Messenger.

On the 1851/2 Fredericksburgh census, Michael shows as born in Vermont. At the time of his birth, "Vermont" did not exist; it was still "New York Province".

"There is no record of the marriage of Rachel and Michael Dafoe. It therefore, took place elsewhere, possibly in American colonies, just before the baptism. Michael Dafoe came to Fredericksburgh in 1784, aged 17 or 18 (he was called 15 in July, 1781, in a Subsistence List in the Haldimand Papers, coming with parents from Pownall, Vermont. It is very possible that he returned to Vermont for Rachel about 1787, having known her before 1781. John [Holcombe] Junior, likely her brother, came with, or shortly after her. I fully believe that they were orphans, seeing that no John Holcomb, Sen., is found in the census of 1790, in either New York or Vermont." [Dr. Burleigh's notes]

Eleanor Moult subsequently found that they were married in Lower Canada.

It has been commonly thought that Michael had three wives, the second being one Rachel Ross. This "Rachel Ross" petitioned for land as "daughter of Zenas Ross U.E. and wife of Michael Dafoe Sr." and received her Order in Council on 10 Oct. 1797. About 1989, this situation was carefully considered by a special committee, comprised of Brian Roberts, Seattle, WA; Jean Dafoe Lake, U.E. and Joan Lucas, Peterborough, Ontario; and Eleanor Carleton Moult, U.E., Scarborough, Ontario. Stephen Wood of Whitby, Ontario also showed keen interest in our research. After a week of research, it was felt that "Rachel Ross" was, in reality, the daughter of John Holcombe and Rachel Wright. Apparently John died early in the War and her mother, Rachel Wright Holcombe was re-married to Zenas Ross; thus Rachel Holcombe Dafoe was actually the stepdaughter of Zenas, when she applied for land as "daughter of Zenas Ross".1

"On Dec. 31, in South Fredericksburgh, Michael Dafoe, aged about 100 years. A large circle of children and relations surrounded the home and death-bed of the venerable patriarch. He was honoured and beloved in life. Survivors believe he died in peace..

Nathaniel Hinckley was the son of Thomas Hinckley and Ruth Merrick.1

Ira was an early Mormon leader who supervised the construction and maintenance of Cove Fort, a strategically-placed fortification located about half-way between Salt Lake City and St. George, Utah. He was the father of author Bryant S. Hinckley and Mormon apostle Alonzo A. Hinckley, as well as the grandfather of Mormon church president Gordon B. Hinckley, and an acquaintance of Joseph Smith Jr.

Hinckley was born in Bastard Township, Leeds County, Upper Canada. He joined the Church of Jesus Christ of Latter Day Saints in 1844.

In 1867, Hinckley was living on his farm in Coalville, Utah Territory, when Brigham Young asked him to build a fortified way station at Cove Creek. Hinckley left for the area within days. The fort was restored in the early 1990s.

Hinckley practiced plural marriage. He was married to four wives, but never more than three at one time: Eliza Jane Evans, Adelaide Cameron Noble, her sister Angeline Wilcox Noble, and Margaret Harley, who was 31 years his junior. Hinckley was the father of 21 children. The last born, a daughter of Margaret Harley who was born when Ira was 61, never got to meet her father until she was almost two years old because he was afraid to visit the house and be arrested for cohabitation. Hinckley ultimately was arrested and fined $200.

Some online records give his birth as 1751.

b. circa 1876
Herman Bechtle was born circa 1876. He was the son of John Bechtle and Mary Eliza Messenger.

Nahun Holcombe was the son of John Holcombe and Rachel Wright.

Isabel was enumerated in the household of son-in-law William Young in the 1850 Jefferson Township, Adams Co., OH, federal census. She was 88, born in VA.

Hosea is buried in the old village cemetery at West Union, Ohio (Punpkin Ridge) on the Prather lot by Wilson Prather. 1