Almina Holcombe was the daughter of Obed Holcombe and Rachel (?)1

Orlanda Holcombe was the daughter of Obed Holcombe and Rachel (?)1

From Carol Laun: McPherson incorrectly assigns a daughter Luna" to Penelope David Goodrich; Luna is a misreading of Lura, and her name really was Laura Hubbard. The 1800 will of Elijah Hubbard names his wife Penelope, adopted son Horace, son Rodrock (Rodriac) and daughter Laura. She is called Lura in her mother’s will. Laura was born c.1790 and married Joshua Kendall 14 June 1810 in Granby’s First Congregational Church and died 14 Oct 1853, age 63. She is buried in the tiny Pratt Cemetery on Creamery Hill Road. She was buried at Pratt Cemetery, Granby, Hartford Co., CT. 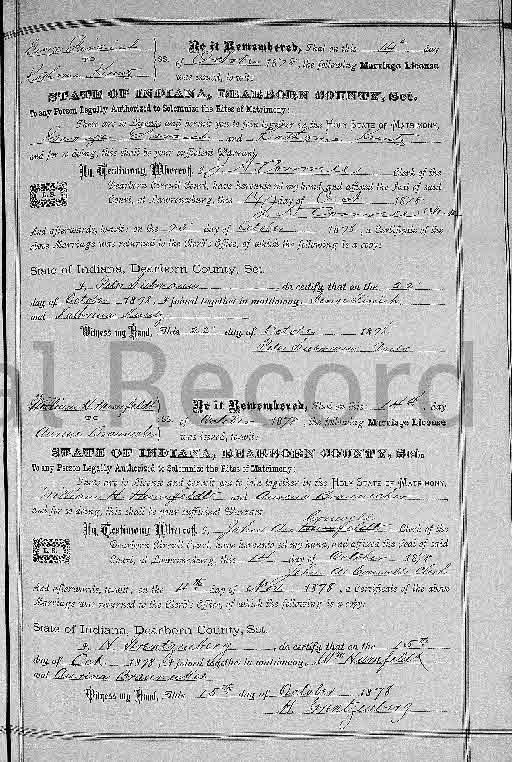 George and Catherine were enumerated in the 1900 Shelby, Shelby Co., IN, federal census. He was a farmer 43, she was 44. Children in the household were John 19, Louella 18, Elizabeth 16, Minnie 14, Edward 11, Victorena 8, Alfred 6, and Ira 4. They were again enumerated in Shelby in the 1910 federal census. He was a farmer and both of his parents were born in Germany.

b. circa 1912
Rosemary McDowell was born circa 1912 at IN.1 She was the daughter of Archibald Thomas McDowell and Mary Rose Marcus.1

b. December 1916
Helen C. McDowell was born in December 1916 at West Lafayette, Tippecanoe Co., IN.1 She was the daughter of Archibald Thomas McDowell and Mary Rose Marcus.1

Child of Joseph Holcombe and Emma (?)

F. Ronald Stemp, of Annapolis, a transportation specialist who worked around the world died of a heart attack Monday at Anne Arundel General Hospital after a brief illness.

Mr. Stemp was born in Wansted, England, and grew up in Edinburgh, Scotland. He attended Merchiston Castle College and was a graduate of the University of Edinburgh in 1927.

After serving as a railway consultant in Argentina for a time, he became president and general manager of the Bermuda Railway in 1931. He was a pilot with the Royal Air Force during World War II until leaving the service because of injuries. He then flew dignitaries from Europe to the United States during the war.

In 1942, he joined the Aluminum Company of Canada and three years later came to Baltimore as district manager for British Overseas Airways. He became an American citizen in 1947 and was sent to Brazil as a railway consultant with the Truman administration's Point-4 program to aid South America.

While living in Annapolis from 1952 to 1957, he married the former Martha J. Currier, who survives him.

In 1957 he was a transportation advisor to Taiwan for the U.S. State Department.

In 1964 he joined the International Executive Service Corps and went to West Africa to help secure business expertise for the underdeveloped countries there.

He retired in Bermuda in 1967 and returned to Annapolis.

His wife is his only survivor.

Frank and Katherine's birthdates were listed on their marriage certificate, viewed on Ancestry.com

Frank J. and Catherine were enumerated in the 1910 Indianapolis, Marion Co., IN, federal census. He was 36 working in a machine shop, she was 34. Children in the household were Agnes 4 and Margaret 2.

Obed and his wife, Rachel, came to Camden from Henrietta in 1834. In 1835 he bought 30 acres, the north part of the Watkins farm and the seven acres of the Frank Sigsworth, where the house stands, but deeded back the Watkins farm and sold to Burt Bayless the seven acres between the road and the east line of what Bayless then owned. After living here three years they moved to Columbus.1

Children of Obed Holcombe and Rachel (?)

Child of Laura A. Voogt and George S. Rodgers